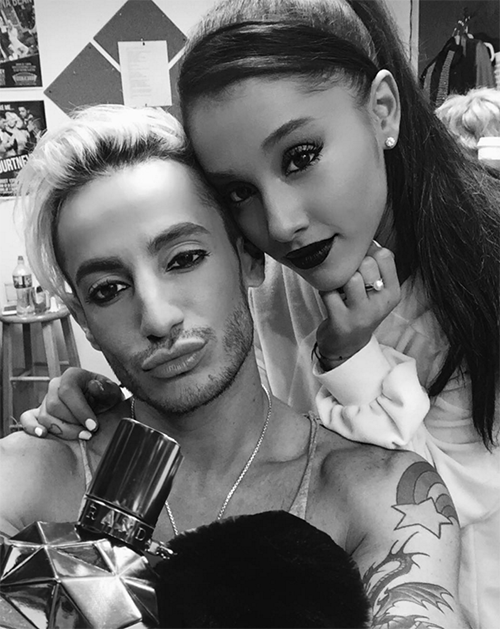 Ariana Grande and Frankie Grande have launched a fragrance that is gender neutral so everyone can smell like Frankie now. Really, that’s the name of the fragrance: Frankie. Ariana Grande is a singing sensation who started out as a TV star on Nickelodeon and morphed into a pop diva who is rising to the top of her game with her powerful vocals. And, as you can see, she’s even in the business of making people smell good. With the launch of her second fragrance to date, Ariana Grande is trying her hand at more than just music.

Ariana released her first fragrance called Ari back in September 2015 and now she has already released her second scent! This time, she enlisted her brother, Frankie Grande, for some help creating the gender-neutral fragrance. You probably remember Frankie from his appearance on Big Brother.

Hollywood Life shared the press release: “Launching my debut fragrance ARI in 2015 was a dream come true, it was AMAZING to smell it on all my fans while I was on tour and hear all about how much they love it! I’m thrilled to kick off 2016 with a special limited edition fragrance, FRANKIE — a shared fragrance for ALL! My brother Frankie is my best friend. When we’re together we have the best time and can’t stop laughing. We thought, let’s change the game this Valentine’s Day and get everyone involved, creating a fresh new scent that EVERYONE can wear! I really love how it smells…it’s energetic, sexy and so addictive. We LOVE the bright silver metallic bottle…now everyone can shine bright like a Frankie!”

So there you have it! If you have always wanted to sparkle like Frankie Grande, now is your chance!

The Big Brother star chimed in with, “YASS! A Grande fragrance for all! I am beyond excited about our new fragrance FRANKIE! I absolutely love Ari and was thrilled with the idea of creating an original scent with my amazing sister, Ariana. We wanted to spice it up for Valentine’s Day and come out with a new fragrance for ALL. YES! Him, her and everyone can spray ALL DAY and share the love! And I’m obsessed with this scent…it has a fresh, playful and sexy little personality… Now you can shine bright like a Frankie and smell bright like a GRANDE!”

Who’s in? Will you be giving Frankie a sniff next time you hit the mall? Don’t forget that this is a limited edition fragrance, so if you’re in, you better grab a bottle while you can!

On another note, who is hoping to see Frankie Grande on another season of Big Brother? I know that I am! We need at least one more good dose of sparkle!