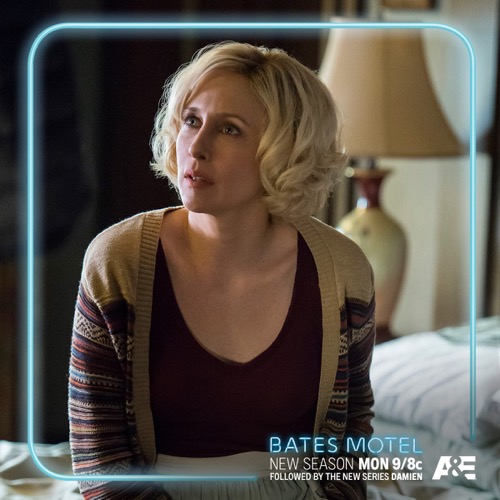 Bates Motel airs tonight on A&E with an all new Monday March 21, season 4 episode 3 called “Til Death Do You Part” and we have your weekly recap below. On tonight’s episode, Norma (Freddie Highmore) and Romero (Mike Vogel) take a big step.

On the last episode, Norma and Norman faced off as they suspect each other of horrible actions; Dylan thought about his future with Emma; and Romero made a choice that would have a big impact on the Bates family. Did you watch the last episode? Did you miss it, we’ve got a detailed recap right here for you.

On tonight’s episode as per the A&E synopsis, “Norma and Romero take a big step; Norman struggles to accept his new circumstances; and Dylan tries to rid himself of old business.”

Tonight’s episode is going to be a great one and you’re not going to want to miss it. Bates Motel airs on A&E at 9:00 PM EST, while you wait for our recap hit the comments and let us know how excited you are about the season 4 episode 3.

Norma and the good Sheriff Romero had conspired to commit fraud on tonight’s episode of “Bates Motel”.

The two of had apparently been in a hurried to get married because the psychiatric facility that Norman was currently residing in had needed a confirmation of her marriage and thereby her insurance, but Norman wasn’t exactly enjoying his time at the facility. He hated the rules which stated that he had to go to daily therapy sessions and that he wasn’t allowed to wear a belt anymore. Although the rule about the belt had been for his own personal safety as well as the others. And Norman seemed to truly hold a grudge against Norma.

He’s been mad at her before but never has he honestly thought that she would hurt him to please herself. Yet, that’s what he alluded to during his therapy sessions with Dr. Edwards. Where he had implied that there was nothing wrong with him and that his mother had ultimately forced him to commit himself however his statements didn’t sound as if his memory was once again vague. It just sounded angry.

So that’s why Norman ended up assuming that Norma had locked him away in order for her to kill people without him interfering. When the truth was she wanted him to get better and not for herself. As it happens, the doctors had finally gotten to her when they said her son and so she was literally doing everything possible to ensure that he received proper medical help.

And in this case that included living with Romero. For while they may have gotten married under false pretences, their marriage had to look real. Especially to the voters that needed to have faith in their sheriff rewarded thus the two were now living together.

But funnily enough that’s a position that Norma never thought she would find herself in. Norma as it turns out was one the few women that had never thought about remarrying yet she had to get remarried and then she couldn’t even pretend like it never had happened. Instead she had to live with Romero and keep up a public pretense.

So she and Romero had gone out for drinks following their wedding ceremony and surprisingly they both had enjoyed themselves. Almost as if their old friendship was back on form. And that the marriage wasn’t going to ruin that.

And thus the dinner had gone off without a problem. Norma had talked about her past or better yet the past that looks better on paper rather than the real thing and later she even got Romero to open up as well. Although he had been sorta tightlipped when it came to one questions in particular.

Norma had apparently asked if who he’s been sleeping with all these months and he may have said that he’s been seeing a pick of women that were friends. However, he might have mentioned that Rebecca has been snooping around lately. And that later during the first days of their marriage, he had caught her going through his things. Supposedly looking to see if the sheriff had open investigation on her.

Yet, Romero didn’t mention any of that. He simply got rid of Rebecca (thankfully not by killing her) and then hid what was presumably money in Norma’s basement. Which Norma would later admit was Norman’s favorite place and that only Norman tended to go down there.

And yet Norma wasn’t suspicious when she found Romero in the basement one day because she had been too busy trying to get around Pineview’s policy to see Norman.

But at first nothing she said was working. Initially the facility had told her that her son needed to go seventy-two hours before he could have privileges and then they had tried to tell her that Norman needed to go through a period of adjustment though Norma went on to ignored everything they said. And she took action by simply going down there knowing they wouldn’t just turn her away.

Only Norman didn’t want to see her. In fact, he had told her that their relationship was over and that he wasn’t going to be covering for her anymore. So he made her leave but then went to Dr. Edwards again so that they could tell the doctor that he has a reason to believe his mother is murdering people. And when asked, he said it wasn’t a problem that the police might possible get dragged into the discussion.