Bates Motel Premiere Recap and Review: Season 4 Episode 1 “A Danger to Himself and Others” 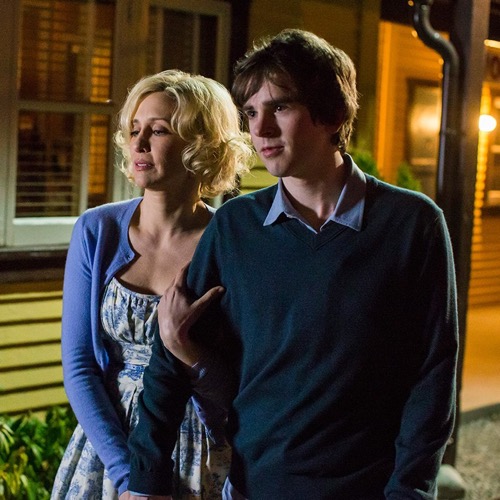 Bates Motel airs tonight on A&E with an all new Monday March 7, season 4 premiere called “A Danger to Himself and Others” and we have your weekly recap and review below. On tonight’s episode, in the fourth season premiere, Norma (Vera Farmiga) searches for Norman. (Freddie Highmore)

On the last episode, Norma hit a breaking point with Norman’s issues. Emma had a surprising reaction to seemingly positive news. Romero finally chose sides, sealing his fate in town. Caleb made a decision that uprooted his new life. Did you watch the last episode? Did you miss it, we’ve got a detailed recap right here for you.

On tonight’s episode as per the A&E synopsis, “in the fourth season premiere, Norma searches for Norman; Dylan awaits news on Emma; and Romero gets a surprising proposition.”

Tonight’s episode is going to be a great one and you’re not going to want to miss it. Bates Motel airs on A&E at 9:00 PM EST, while you wait for our recap hit the comments and let us know how excited you are about the season 4 premiere.

What’s hiding one more dead body? Apparently Sheriff Alex Romero doesn’t even have to think about it anymore, he just drives bodies out to the water and let them sink on boats as if it were nothing.

But the body he did put to rest hadn’t been Norman. Norman was still lying in a ditch somewhere and speaking to himself as in carrying on conversation with thin air while his mother and brother were putting up fliers around town. Looking for him.

Only Norman had been fine. He had some cuts and bruises from the ditch however the only worrying thing about him had been his need to speak to himself as if he was speaking to his mother. A farmer had apparently overseen one of those conversations and had knocked out Norman before taking him to the hospital for the forty-eight-hour observation.

And Norma later swore, by the way, that her son didn’t need that observation. In fact, she had tried to claim that her son was fine and that all he needed was to go home with her. Though the hospital administrator held a different opinion.

The woman in charge at the hospital had wanted to know why Norma hadn’t taken Norman to a doctor despite knowing about Norman’s frequent blackouts and so she asked about Norma’s religious practices seeing as doctor visits could actually be against Norma’s faith. But Norma hadn’t bothered to lie about that. She said she wasn’t religious and the administrator was shocked to find out that too hadn’t been an issue with getting Norman treatment.

So Norma had been told that what she did, by hiding or in her case simply ignoring Norman’s problems, was neglect. Although, she couldn’t be charged for that because her son was already eighteen. And seeing as Norman was now a legal adult, the administrator didn’t feel like she had to let Norma see her son.

And so Norma realized that maybe her son did need professional help. However, she didn’t want him to stay on at that particular hospital that had been too overcrowded and appeared to be slightly rundown. So she looked into private facilities where she could possibly place Norman so that he was no longer a danger to himself or to others.

But Dylan hadn’t been part of the decision process. Once he had found out that Norman was fine and was in a hospital, he had gone to be with Emma on operation day and Norma surprisingly given Dylan her blessing. In both leaving her to handle Norman on her own as well as his relationship with Emma.

Only Audrey had gotten kicked out of the hospital by Will so she then went to the Bates Motel. Where she ran into Norma and tried to get the other woman to hand over a letter to Emma for her. But Norma said no because she didn’t want to get herself involved in a family matter and she also told Audrey that she could not speak with Norman.

If anything she ahd put her foot down on that last part to more protect Audrey than Norman. Norman had gotten released from the hospital, but his doctors were demanding he find treatment and had even called social services so that Norma couldn’t ignore the issue anymore. And so his mother was trying to get into the facility she had heard about it though, unfortunately, she needed insurance just to get him onto the waiting list.

So Norma had then come up with a plan. She had gone over to the Sheriff’s one early morning to ask him to marry her so that she could get put on his insurance. And she had left Norman in the house alone.

Although to be fair, Norma had locked Norman in her room because she knew it wouldn’t be safe if he got out. So she was finally learning however she hadn’t counted on Norman breaking down the door much less Audrey going against her wishes to ring the doorbell the second she saw Norma’s car drive away. And therefore, while Norma’s marriage proposal was being turned down, Audrey accidentally walked in on another one of Norman’s episodes.

That time, though, he had been wearing his mother dressing robe because he thought he was her and he treated Audrey as if he was his mother. All the way up until she admitted that she was Emma’s mother and wanted to reconnect because that’s set Norman off. And he then killed her for abandoning her own child.