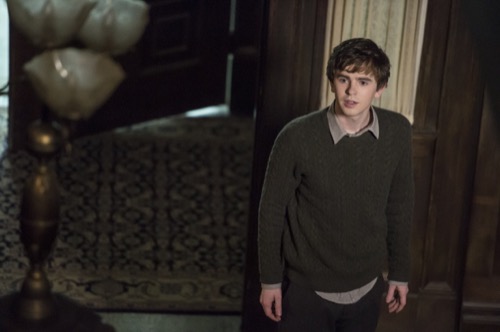 Bates Motel spoilers for season 5 reveal that Norma Bates [Vera Farmiga] will continue as an important part of the final season. Norman Bates’ [Freddie Highmore] psychosis will create his own version of Norma. At this time no date has been set by A&E for the premiere of the drama’s fifth season.

Vera Farmiga was on hand at Comic Con 2016 in San Diego and spoke with Zap2it about the upcoming final season of Bates Motel. The actress revealed that she did ask that Norma’s role not be limited. “I think there’s going to be more liberties and lunacy, given the fact that she is a figment…a ghost [Norman] is creating.”

Showrunner Kerry Ehrin previously revealed, “The writers have guideposts and we know the destination. How exactly we’re going to get there…that’s kind of the fun of writing, and that’s what we’ll be doing when we get back in the writer’s room.”

What do the writers have planned for Norma? Vera Farmiga revealed that because Norma will be a figment of Norman’s imagination storylines will “Continue to being a playground.”

Rihanna has joined the cast as Marion Crane of Bates Motel for the final season. Season 5 spoilers tease that the show will not end with Marion pulling up to the house. There will be interaction between Marion and Norman that steps outside the plot of the Alfred Hitchcock movie ‘Psycho.’

Just how will Norma, or should we say the Norma that Norman creates in his mind, figure into the storyline for Bates Motel final season. Fans are anxious to see how things play out as there have been hints that a spinoff of the A&E drama may be in the works.

Share your thoughts in the Comments section below, on our Facebook Page,  join our Facebook Group or Head over to our Discussion Board to Talk Bates Motel!