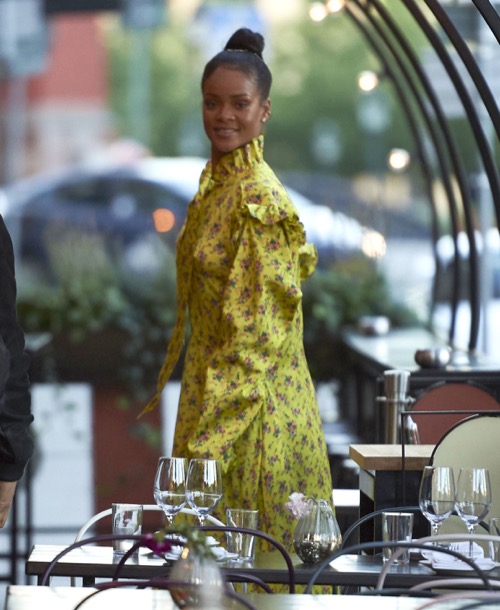 ‘Bates Motel’ spoilers for season 5 reveal that Rihanna has been cast in the role of Marion Crane. This role was portrayed by Janet Leigh in the iconic Alfred Hitchcock film ‘Psycho’.

The news that Rihanna had been cast as Marion was revealed at Comic Con 2016 in San Diego on Friday, July 22. Showrunners Kerry Ehrin and Carlton Cuse released a statement regarding their choice. “We wanted to thrust the iconic role into a contemporary spotlight and redefine it in a meaningful and exciting new way.”

Interestingly enough, Rihanna is a fan of ‘Bates Motel’ – and the executive producers are huge fans of the 28-year-old singer. “It was a perfect collision of creativity and fate,” said Ehrin and Cuse.

.@rihanna to check into #BatesMotel as Marion Crane in the 5th and final season!https://t.co/7t2pRL43cf

Rihanna helped make the announcement of this ‘Bates Motel’ spoiler. A video was posted to the A&E show’s Twitter account. “I am about to check into the ‘Bates Motel,’ very soon, and guess what else? Guess who’s playing Marion? Yes, so all you Comic-Con fans, all you ‘Bates Motel fans, stay tuned” Rihanna teased.

Other ‘Bates Motel’ season 5 spoilers that have been revealed included news that Freddie Highmore [Norman Bates] has written at least one episode of the show’s final season. Highmore wrote the fourth season episode 8 of ‘Bates Motel’ entitled ‘Unfaithful.’

As previous ‘Bates Motel’ spoilers have indicated there will very little left to the imagination during season 5. Executive producer Kerry Ehrin knows viewers are aware of how the series will end.

Viewers knew Marion Crane had to arrive at some point, they’re just not sure exactly when. Showrunners have indicated that the writers are not following the exact formula of the 1960 film and that Marion and Norman will have interaction in a different way.

‘Bates Motel’ will return to A&E in March 2017. Fans should note – the final season will have only 10 episodes.

Share your thoughts in the Comments section below, on our Facebook Page,  join our Facebook Group or Head over to our Discussion Board to Talk Bates Motel!