Beauty and The Beast LIVE Recap: Season 4 Episode 9 “The Getaway” 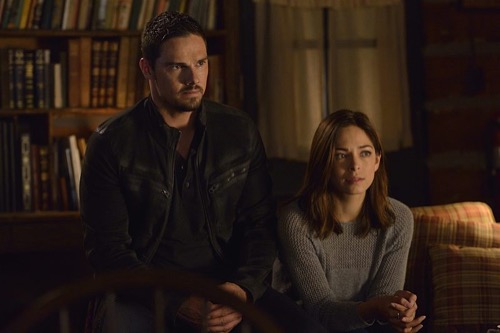 Tonight on the CW their hit fantasy drama BEAUTY AND THE BEAST airs with an all new Thursday, July 28 season 4 episode 9 called, “The Getaway,” and we have your weekly Beauty and the Beast recap below. On tonight’s episode, Vincent (Jay Ryan) and Cat (Kristin Kreuk) strive to return normalcy to their lives despite the theats posed by a beast bounty and DHS manhunt.

On the last episode, Vincent went undercover with an operative whom Cat learns was an assassin; and Cat tried to prove to DHS that she can still be trusted. Did you watch the last episode? If you missed it, we have a full and detailed Beauty and the Beast recap right here for you.

On tonight’s episode per the CW synopsis “Vincent and Cat strive to return normalcy to their lives despite the theats posed by a beast bounty and DHS manhunt; and Tess takes a risk by shielding Vincent from a reporter.”

Grace Rose had finally gone too far on tonight’s episode of “Beauty and the Beast”. The reporter had apparently gotten a great tip about a secret meeting at Greydal and she also had a source that essentially told her everything she needed to know about Deputy Secretary Hill’s death. Even the part where Vincent killed him after Hill had tried to erase all signs of the Super Soldier program which included Vincent. However, Cat had a plan to stop Grace. Cat had tried to stop Grace from going ahead with her exclusives by getting her arrested so she enlisted Tess’s help and had Tess put together a raid on Greydal’s off sites.

Cat had known that Grace would be reckless enough to show up a top secret Greydal meeting and she hadn’t wanted her husband to be found there seeing as Vincent had already warned her that a meeting with “the team” that night. Yet, what Cat had later asked Tess to do was technically illegal. The raid on an unmarked tavern still needs a plausible cause and that’s something Tess didn’t have when she had done as Cat wanted her to do. So Cat ended up crossing line with Tess because Tess was finally getting fed up with putting herself out there and taking all the risks just so Cat could continue to live in a fantasy land because there’s no one way that Cat and Vincent were going to be able to return to their normal lives after everything over.

And when Cat finally saw that for herself, she had dragged Vincent away from Greydal. Cat had had Vincent picked up after he and his team had to run from the raid. So Vincent had been taken back to their place and had found out that his wife was packing a bag for the both of them. Cat said that they needed to get away what with Grace doing a story on them so she had taken Vincent out to a secluded cabin where she hoped they would be safe. But Vincent had actually gotten upset with Cat because he said that he needed to return to Greydal because he was getting closer to finding out who had put a bounty on him.

Greydal it seems had gotten information allegedly about the beast they were hunting. So Greydal had thought that they were moving on the beast and didn’t know that one of the members on their teams was funnily enough, the beast they were looking for so Vincent wanted to stick around because he thought that their investigation would eventually lead back to the guy that put out the bounty. However, Cat didn’t want to take that risk and she felt that it was time for Vincent to face the music as well so Cat talked to Vincent. And she began by telling her husband that they were never going to return to their normal.

Cat said normal was lost for them! DHS was never going to take her back even if they were able to prove self-defense with Vincent and Hill and she also added that the hospital couldn’t afford to take Vincent back after he had been considered a murder suspect. So neither Cat nor Vincent had a career waiting for them and Tess wouldn’t even be able to hire Cat back if she wanted to. Though the way it’s looking, Tess might not ever want to work alongside. Tess had still been in the city so Grace Rose had soon found out that it had been her that orchestrated the raid and had so Grace surprisingly threatened to include Tess in her story about a police cover up.

So while it really wasn’t their fault, everyone that Cat and Vincent brought into their chaotic life together was getting pretty damned tired of having to live with this big secret that they always had to protect. But what Cat and Vincent talked about out at that cabin was that they couldn’t necessarily hide forever. They said that one day someone was bound to catch up to them whether it was DHS or bounty hunters so ultimately the two began forming a new plan where they didn’t have to hide anymore. And that involved a certain pesky reporter.

Cat and Vincent had called Grace Rose and they had offered to give her an exclusive if she agreed to protect her sources. So Grace had agreed to that because she knew that an interview with them would finally give her the credibility she needed to publish her story. However, Grace hadn’t known that someone from Greydal had tapped her phones and that she had been followed to the cabin so it was until Vincent sensed the first signs of trouble that they realized he had been found out. Greydal had apparently bugged Grace because they wanted to know how she knew about their meeting and they had hoped she would lead them to a mole.

Yet, thanks to a phone call and having Grace followed, Greydal ended up realizing who the beast was and had tried to capture him. An agent of theirs had hit the cabin and had accidentally killed Grace while he was trying to get to Vincent and Cat. So Vincent and his wife had had to work together to bring the Greydal agent down however they now didn’t have a plan. Their first plan blew up in smoke when Greydal realized he was the beast and the second one didn’t work out too well because Grace was dead so she couldn’t tell their story to the press.

And so the only other possibility that Vincent thought he had left was to go back to Greydal because he knew they would eventually take him to meet the man that put a bounty on him.