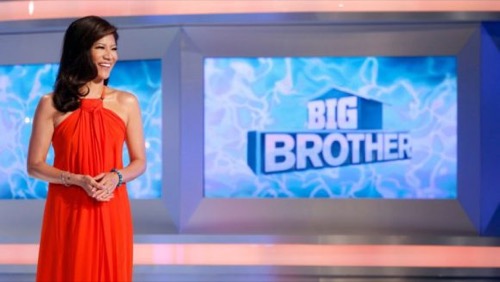 Tonight on CBS Big Brother 18 airs with an all new Wednesday, July 13, season 18 episode 10 and we’ve got your Big Brother 18 recap down below! On tonight’s episode, the Power of Veto competition is held.

On the last episode, the nominations for the upcoming eviction were revealed, which included Bronte, Tiffany and Paul. Did you watch the last episode? If you missed it we have a full and detailed Big Brother 18 recap, right here for you.

On tonight’s BB18 as per the CBS synopsis, “the houseguests go head to head to compete for the Power of Veto.”

The Big Brother 18 recap begins tonight at 9pm with an exciting new episode, we will be live blogging the show with all the up-to-the-minute details so make sure to come back to Celeb Dirty Laundry and watch the show with us. Can’t wait to see how all the drama plays out, how about you? Are you excited about the Big Brother 18 recap tonight? Who are you rooting for to win? Hit the comments and let us know your thoughts. Come back to CDL for all your BB18 spoilers, news and recaps!

#BigBrother18 #BB18 starts right after the Roadkill nominee reveal and Bronte is upset and wants to run and hide and wonders who nominated her and thinks it’s Paulie because she was aligned with Jozea and Victor. She talks to Natalie.

Frank thinks that Bronte is his Plan B in case Tiffany wins the Power of Veto. Tiffany tells Paulie she’s going to play really hard for the veto. Bridgette tells Bronte she’s upset that she’s on the block and thinks someone is sabotaging her HoH week.

Bridgette says if she wins PoV, she’ll pull her down. Bridgette tells her she hopes that Natalie wins PoV and pulls her down and then Roadkill has to put up someone else. Frank and Paul talk about taking out Tiffany and who they would nom if Tiffany comes off the block.

Paul worries about the lies

Frank tells Paul he’s safe but Paul doesn’t believe him. He wants to play hard for the veto to shield himself. Bronte feels isolated and alone when she talks in the Diary Room and she cries and says she wants to bury her head. She says no one really knows her. Bridgette and the girls go upstairs with the Spy Girls. Bronte decides to tell them her big secret.

She says she’s not a child care worker who’s never been to college. She tells them she’s a secret nerd and her prime number dreams. The three of them hug it out and cheer. Bronte begs them not to tell anyone. Natalie thinks this is cool and asks if she knows calculus.

Later, Frank goes up to talk to Bronte and James watches him go in with them. Frank is happy they don’t know that he won RK and put Bronte on the block. He says the person who put her up doesn’t want her gone and says Tiffany is the real target.

Natalie says they need to keep Bronte safe this week. Frank says he’ll pull Bronte off the block if he wins PoV. He says if Bronte picks him to play, he’ll play hard. James tells Da’Vonne that Frank is trying to pull in Natalie and Bronte in on his side.

Day wants to tell the girls that Frank is no good. James wants to warn Natalie that Frank won Roadkill. The phone rings and James answers it. It’s Natalie calling for him. She says she’s upstairs alone. He asks how Bronte is doing and Natalie says she’s upset.

James tells her to tell Bronte to be calm and don’t Frank anything. Natalie says she though Paulie or Zakiyah won it. James says Paulie didn’t win RK and neither did Zakiyah. Natalie is stunned and says Frank even came up to check on Bronte.

James blows up Frank to the Spy Girls

He says things are fine and the house is voting against Tiffany. He says Frank doesn’t want the veto to be used. Natalie realizes Frank might put her on the chopping block. James says she can’t tell anyone and Natalie agrees to keep the secret.

Natalie wants to warn her alliance but also wants to stay loyal to James. Frank comes in and yells at James for being on the phone instead of helping cook the burgers and James tells her that he’s grounded and his dad is taking the phone.

Natalie tells the girls they have to watch out for each other and brings up Roadkill. The others say Michelle or Paulie won it. Bridgette says she trusts Frank and Natalie asks if she’s sure. She wants to tell Bridgette but can’t because of what she promised James.

Bridgette insists she trusts Frank and says she’ll let them know if she stops trusting him and tells Natalie that she doesn’t trust James and Nat does. Nat agrees they can both be suspicious of the two guys and still trust each other and protect Bronte.

Bridgette calls people to come choose who plays the veto comp. Bronte, Paul and Tiffany join Bridgette. She will pull two chips. She first pulls Bronte and that means she gets to pick so she chooses Natalie. Frank doesn’t like this because she’ll pull down Bronte.

The next chip is Paulie. Nicole approaches Michelle, Da’Vonne and Zakiyah and they wonder if Paulie will leave the noms the same if he wins. They know Natalie will take down Bronte and that means one of them will go up. Da’Vonne talks to Nicole about Corey going up and Nicole says better Corey than her.

The PoV comp is the Outback competition and Da’Vonne is hosting. They are shown a recipe and if the pour in the correct ingredients they advance and if they pour in the wrong one, the recipe explodes in their face. The winner gets a private Outback dinner with their team.

Tiffany hopes to win this since Vanessa killed in in BB17. Bronte hopes she or Natalie wins it. Paul hopes that anyone wins but Tiffany. The first recipe has five ingredients and they’re told to pour in the middle one. Natalie says memory is not her best asset.

Paul tries to make a song out of his ingredients since he knows music. Bronte’s blows up and so does Natalie’s. The next recipe has six ingredients and they have to find the component that starts with F. Paulie remembers his brother Cody losing in the first round in BB1 and now he blows up too.

Bridgette wins PoV and then Frank takes her down

Tiffany, Paul and Bridgette are still in it. The next recipe has repeat ingredients. Tiffany blows up on that round and she’s eliminated. Frank is thrilled that she’s out of it and that means he can send her home for sure. Tiffany is very upset.

Now it’s Bridgette vs Paul. There are 11 components made of two ingredients that repeat. This is hard. Paul gets blown up this time. Bridgette wins the PoV comp! She’s thrilled and the Outback dinner for her Category 4 team. She has HoH and PoV now.

Frank and Bridgette do a back bump that goes bad and she falls down and sprains her ankle. Frank and Corey carry Bridgette in from the backyard because of her injury. She’s got crutches now.

Paul’s beard is full of colored glitter and Paulie laughs at him. Paul says he’s what Frankie Grande would look like if he grew out a beard. Tiffany is mad and says she’s smarter than everyone in the house so it makes no sense that she isn’t winning any competitions.

Bridgette thinks Natalie is withholding info and hopes she’s being true to the alliance. Bridgette wants to find out who the Roadkill is. After Natalie walks out, Bronte asks Bridgette if she thinks Natalie knows something.

James tries to evade. James also doesn’t like that Bronte is trying to change clothes in front of him. James says he doesn’t know what this person will do and she says no worries.

Frank runs to help Bridgette as she calls for the Outback steakhouse reward. She says Category 4 gets to invite another team and they invite Big Sister along. The backyard is done up Australian style. They are served blooming onions and others Outback classics.

In the house, the Have Nots on slop are envious and wishing they were having steak. Paul asks for a to-go box. Natalie talks to James and asks why he’s not talking to her or touching her. She tells him she’s had to lie to Bronte.

He tells her Bronte came asking him about Roadkill. He says he lied to her and knew she lied to protect him. She says the girls keep brainstorming about who won it. She says Bridgette really trusts Frank and he has manipulated Bridgette’s HoH and is playing her like a fiddle.

Frank shows his cards to Bridgette

Natalie wants Bridgette to see Frank for what he is – a user and abuser. Bridgette cuddles in bed with Frank in the HoH room later. She tells him she wants to win RK later. He tells her that he won Roadkill this week and she asks why he put up Bronte.

He says he put her up because he knew she would be safe and is a strong player in the veto comp. Bridgette tells him she trusts him. Frank knows he’s gambling telling Bridgette all of this. He wants to keep Bridgette in his pocket. She tells him the other girls don’t trust him.

Frank decides to tell Bridgette some more stuff. He tells her he put her up the first week. She says she knew it. She cuddles him and says thank you. She says it makes sense to her and she calls him a beast. Frank wants Tiffany to stay on the block.

She calls him a secret weapon. She says he’s so confident and says Frank knows best. He wants her to leave the noms the same and is totally manipulating her.

Bridgette goes downstairs to ponder the PoV decision. She puts on her PoV necklace. Bronte hopes that she comes off the block but doesn’t want Natalie on the block in her place. Da’Vonne is worried about what Frank will do since he’s running Bridgette’s HoH.

Bridgette says she’s leaving the noms the same and won’t use the Power of Veto. Frank doesn’t make a face but he’s very pleased. Bridgette did exactly what he wanted. Bronte hopes that Tiffany has no secret ammunition to save himself.

Paul also feels safe but says it’s .1% that he’s going home and is pretty sure that Tiffany is going home. Da’Vonne wants Tiffany to stay and help her get Frank out so she’s going to try and flip the script so Frank  doesn’t get what he wants.

Come back to CDL tomorrow night for our LIVE recap of the LIVE eviction!