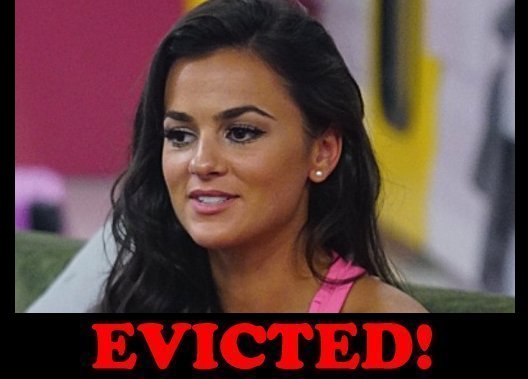 Tonight on CBS Big Brother 18 returns with an all-new Thursday, September 8, 2016, episode and we have your Big Brother 18 recap below!  On tonight’s Big Brother Season 18 Episode 37, we have the live eviction where either James or Natalie will be sent home.

Did you watch yesterday’s episode where Corey won his third PoV and decided not to use it on either person on the block? If you missed the episode we have a full and detailed Big Brother recap, right here, so you can get caught up before tonight’s episode!

On tonight’s episode as per the CBS synopsis, “Either James or Natalie will be evicted from the house.  Once the eviction is complete the HoH competition will start.  This week it is an endurance competition.”

#BigBrother18 starts right after the Veto Meeting. Corey and Nicole have two out of the three votes so they will be the big decision makers. Natalie starts in again on James about their BB18 game play and how it was a mistake to trust Nicole and Corey.

Natalie says in Diary that she and James are on the block because the other showmance betrayed them. James says it’s his fault for voting Victor out but tells her that this game can change. Paul talks to Corey and Nicole about who they should vote out.

Corey wants Natalie gone and doesn’t want to vote James out. Paul tells them he told James some stuff Natalie said about him. Paul doesn’t tell her that he and Victor are working James in case he stays and wins, they can work with him.

Nicole wonders what Paul is up to

Nicole says in Diary that Paul might be covering his tracks and might be working with James if he stays. Victor and James play pool and talk. Natalie walks past them without speaking. Victor asks if they’re arguing and why. The guys agree they don’t get it.

Victor wants to be sympathetic to James to build their relationship in case he stays. Natalie sits doing her nails and Victor and James have bro time. James goes to talk to Natalie who isn’t chatty. He asks if she’s okay and he says people have noticed the tension between them.

James says she’s being distant. Natalie says they’re on the block and it’s stressful and tells him to stop talking about things. Natalie says she knows she’s going home and it doesn’t feel good. Inside, Victor tells Nicole and Corey that James is focused on Natalie, not the game.

Natalie says this is hard for her and James says he’s been holding them together for 80 days and says she might go home and never talk to him again. She says she’s in a nightmare and he takes offense and goes back to the pool table.

He asks himself why he got into a showmance at all. Later, he’s on the exercise bike when Corey comes over to hang with him and asks what’s up. James says Natalie is pissed 24/7 and James says she thinks she’s going home and blames him.

James says she told him she betrayed Victor and Paul and Corey says that’s dumb. James says she blames him for working with Corey and Nicole. Corey sees this as an opportunity to squad back up with James. Corey comes to Nicole to vent about Natalie.

The house turns on Natalie

He says Natalie is blaming her eviction on James and he says Nat is being a brat and tells Nicole now is the time to reel in James. Corey and Nicole wonder if James would put them up if he stayed and won HoH. Nicole considers and is ready to take a shot.

She thinks Paul and Victor might already be working James and they need to get after him too. James and Natalie go into the London room and he says he wants to sleep with her since it’s one of their last nights. She tells him he can’t sleep with her anymore and goes to the other bed.

She says stop fighting with me and let me live. She lays down and he tells her she can have her bed back. Natalie says she can’t wait for her eviction on Thursday, meet Julie and go to Jury. James calls her a McA**hole. He says she’s being a brat and showing her true colors.

Then James says he heard she threw him under the bus. He says it was perceived that way. He says actions speak louder than words. Natalie says she’s sad then says she swears on everything she didn’t do it. James says he doesn’t know what her end game was with him.

James says he’s been sheltering her this whole game and they have a day and a half left and she’s doing this to him. James says she tried a showmance with Victor, then tried flirting with Corey and Paulie then kept it secret from her.

Natalie asks who he is right now and James says he had her back this whole time. She says she had his back and James says then why can he sleep beside her sometimes or not. Paul is listening and repeating it to the others what he can hear.

James has had enough

James says he won’t kill himself over this and goes to walk out. She says she can’t believe this. Natalie cries in Diary and says her chest and heart are hurting because James thinks she used him. She says he’s not the person she thought he was.

James goes to talk to Corey, Victor, Nicole and Paul who tells him he can talk to them. James says in Diary he let her have it. He tells the others that he’s done and says in Diary that’s not the way you treat someone you care about.

Jeff and Jordan join Julie onstage. Jordan talks about eloping while pregnant at the courthouse. Jordan says they are having a boy and Jeff says agreeing on the name is hard. Julie asks them if they are surprised that two showmances and a bromance are in the finals.

Jeff says Corey and Nicole should have had a target on them and so should Natalie and James plus Victor and Paul. Jeff says it’s surprising they’re all six still there. Jordan says James got distracted and lost his game. She says if Natalie goes, he could redeem himself.

Julie asks them for winner predictions. Jeff says Paul and Jordan says Victor. Over in the Jury House, Zakiyah says things are cool and Da’Vonne is annoyed that Z took up with Paulie again. They talk about who will come next and Bridgette says Victor.

Paulie says he wants Corey to stay and Day asks if he was his closest ally. Paulie says yes and Zakiyah stares. Meech shows up at the house. The girls all go to hug her. She says Nicole is a snake. Michelle say she could have campaigned harder but Nicole put her up.

Meech shows them the video

They watch the end of the HoH comp and Meech says Paulie was close to winning the comp to get back in the house. Michelle says she was working with Paul but then they had a blow up and he called her the c- word. She says she was happy when he fell in the comp.

Meech says this is James’ wall comp and she and Nat were rooting for him but then he dropped for Nicole. Da’Vonne is pissed that James threw it to her. They see Nicole nominated Michelle and Paul. Then they see the PoV comp where Paul picked Corey to play.

Bridgette says that means Paul was a pawn and Meech didn’t get it. Then they see the Christmas comp. Paulie says his girl Nicole won and he’s proud she’s in final six. They watch her pre-eviction speech and her eviction after Nicole cast the tie breaker vote.

Then they see Meech telling them all that Nicole was floating her way to final two. Day is shocked but says Nicole is doing her thing. Meech says she hopes Nicole is evicted next week. Julie greets the houseguests and says it’s time for the LIVE vote.

She tells Natalie to speak first. Natalie gives a shout out to her family and says she came in knowing nothing about the game and calls him her soul mate. She says he’s stuck with her forever. James does his shout outs and then says it’s been great to meet Natalie.

He says Natalie was scared to play the game and he was honored to play with her. James says his fate is in their hands and whatever they feel is best and he’s happy with what they do. Time to vote. The votes are:

Natalie is evicted from the BB18 house!

Natalie takes the basil plant with her. Everyone hugs James after she’s gone. They watch her photo fade to black and white. Julie asks Natalie if she threw James under the bus. She says she didn’t. Julie says when she talked to Victor and Paul, it looked that way.

Natalie says she would never throw him under the bus and says she was honored to leave next to him and even campaigned to keep him. Julie asks about the soul mate comment and asks how real is it. Natalie says it’s real and she cares about him so much.

Natalie gets her video goodbyes

Natalie says James is the guy version of her and she doesn’t know if they’ll work out. Julie asks if things will turn romantic and Natalie says it could. She says she’s rooting for James and he has her jury vote. Julie asks what if he works with Corey and Nicole.

Natalie says she told him not to and says she told him sorry and that he should do what he had to. She says it’s very emotional in the house. On the videos, Victor says he got her evicted and someone has to win. Paul says he knew she was smart from the start.

He says she lost his respect when she threw James under the bus. Nicole says she’s the only girl left in the house and says she should be proud. James says this is his toughest goodbye ever and says she’s special to him and has taught him a lot about himself.

Natalie says again she didn’t mean to throw him under the bus.

HoH comp is the slip and slide challenge

All but Victor are playing “Big Brother Slide in Theater.” They have to move eight gallons of butter into their containers. They have pretty small scoops. There is also a second smaller container and you can fill that one first and it gives you a larger scoop that will help you move more.

For those who can’t wait for the CBS episodes, check with CDL often for all the latest Big Brother 18 spoilers from the Live Feeds.