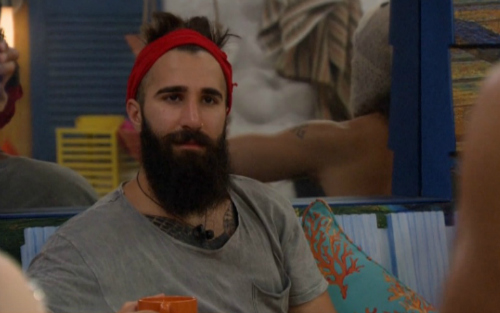 Big Brother 18 spoilers reveal that the Week 1 Power of Veto (PoV) winner is Paul Abrahamian. But Paul didn’t end up playing in the PoV as a random draw – he was the third nominee as a result of the new Roadkill comp so he had to play in the PoV as one on the chopping block.

Frank won Roadkill and got to anonymously nominate someone and he went gunning for newbie Paul who has been chief in leading the newbies in a plan to take out the veterans one by one. Frank had him figured out and put Paul on the chopping block.

FYI, the Roadkill winner, since they’re anonymous, won’t play in the BB18 PoV comps unless their name is drawn. So this time, Nicole was playing along with her nominees Jozea and pawn Paulie plus Frank’s nominee Paul.

Da’Vonne and Corey’s names were drawn to play in the Veto comp as well and Michelle played host. This was a good crew playing because Da’Vonne and Corey are both on the side of the veterans and would leave Jozea on the block. 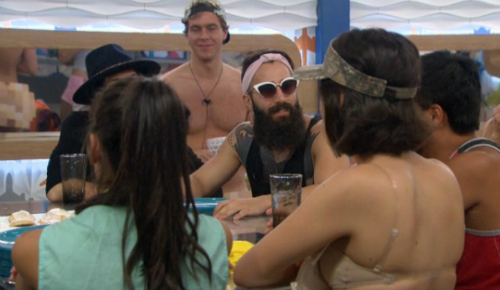 That means of the six playing PoV, all but two would definitely leave Jozea on the block. But, let’s be real, why would Paul not take himself off the chopping block if he won? Also of interest is that Big Brother 18 spoilers tease that Frank may have admitted he nominated Paul.

Up until that point, Michelle and Nicole were suspected of being the Roadkill winner and nominating Paul. The BB18 Live Feeds went down during the PoV comp, as usual, so the details aren’t known about the competition itself.

The feeds were down for nearly three hours – so that gives us a little information. The bottom line is that Paul won PoV and should pull himself off the block. However, let’s slow the roll for a minute and admit the newbies have been playing dumb in BB18.

Jozea blabbed their strategy to Da’Vonne and Victor opened his kimono and spilled all to Nicole. That’s against Big Brother 101 – revealing your strategy to those you’re targeting makes no sense. In that vein, Paul might not pull himself off the block.

Perhaps he’ll be so confident in the newbie alliance that he rolls the dice and sits tight and uses the nomination to pull down one of the other two newbs. That would be really dumb. That being said, it could happen… We’ll see. Bridgette seems to be a likely replacement nom.

Supposing Paul pulls himself off the block, the assumption is that Frank would make the replacement nomination since he was the one that nominated Paul. However, it could be thrown back to HoH Nicole. Whatever happens this time will set the precedent for the future Roadkill powers and we’ll know.

Also revealed on the BB18 live feeds was the punishment that Frank, Michelle, Paulie and Bridgette will endure for a week. You can see in the pic above of Frank that the punished houseguests were given flesh colored undies to wear.

Then they have to walk around with pixelated cutouts on them over their private bits so it looks like they’re naked and being blurred out. That’s fun but on BB18 Live Feeds, “the pixels” were talking about how Big Brother hasn’t given them clean undies – ick!

What do you think of these Week 1 PoV results? Share your comments below and check back with CDL for all the latest Big Brother 18 spoilers and LIVE recaps all season long.