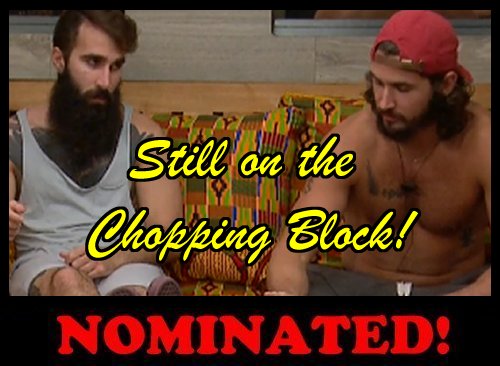 New Big Brother 18 spoilers from the Live Feeds reveal that Week 12 PoV winner Nicole did NOT use her veto power – as expected – and that leaves Victor and Paul on the BB18 Chopping Block with Victor the intended target for eviction.

The Week 12 Veto Meeting was held a day early – it was Sunday instead of the usual Monday – because we’re in a Fast Forward week. Victor is anticipating four more days in the BB18 house, but he’s actually going home Monday night.

Live Feeds will go down for an eviction episode that will NOT air live. This will be the first (and presumably only) Non-Live eviction of the Big Brother 18 season. This eviction episode will air on Tuesday, September 13.

After the Monday eviction, the remaining four houseguests will face a Fast Forward HoH and PoV comp and then another eviction, this one LIVE on Wednesday, September 14. On tonight’s episode, Sunday, September 11, here’s what you’ll see.

There will be the results of the grueling and physically challenging slip and slide movie-themed HoH comp which Corey won. We’ll then see Corey put Victor and Paul up on the chopping block and the bromance go into a meltdown.

Then on the Tuesday, September 13 episode, we’ll see the PoV comp which was the comic book cover challenged we’ve seen in year’s past. Nicole took the Power of Veto from the guys. We’ll also see the PoV meeting where Nicole chose NOT to use her power.

Victor is the current target and doesn’t seem like anything can save him from a third eviction. He’s a comp beast and they can deal with Paul in comps but Victor is a formidable opponent. With Victor gone, the power hinges on the next HoH comp that will play out Monday night.

It’s not clear how long Live Feeds will be down but CDL will bring you the latest updates from the feeds as they become available. It will be interesting to see how the power shifts after Victor’s eviction. There are rumors of a James-Nicole final two deal that was born before the game started.

Nicole has also jokingly asked Corey if he’d be mad if she evicted him. Needless to say, there are shakeups coming with James and Paul both being free agents and the winner of the HoH driving who goes into the final three.

Who Will Fare the Best With Jury Votes?

When it comes to jury votes, Nicole will do okay with the guys in jury, but not the girls. Even if she makes it to final two, she could go down in flames since the women don’t like her too much.

Then again, they could make a “girl power” move since it’s been a while since there was a female Big Brother champ. That was Season 13 Rachel Reilly’s win. This is an exciting week with two evictions coming and lots of drama.

Victor and Paul seemed to handle it pretty well since they knew Nicole wasn’t likely to use the Veto and things seem convivial in the house. Stay tuned to CDL tonight for a LIVE recap of the latest CBS Big Brother 18 episode.