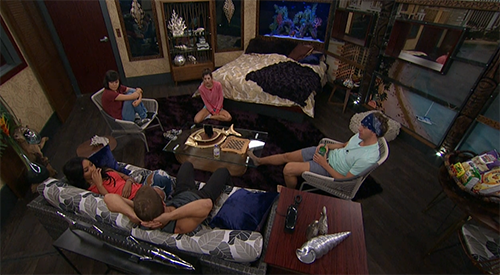 Big Brother 18 continues to heat up and, according to Big Brother 18 spoilers via the LIVE CBS feeds, the BB18 Power of Veto competition has just wrapped up. Paulie was crowned the PoV winner, which means that his plan to backdoor Victor should (if things don’t change) continue as planned. Earlier, Victor won the Roadkill competition. He was granted the power to add a third nominee to the chopping block. Ultimately, he put up Tiffany, one of the members of the Eight Pack Alliance.

Victor’s decision sent Tiffany into a bit of a tailspin and forced some of her paranoia to reveal itself. She wondered whether or not the guys were switching their targets; this, however, was not the case. Hmmm…maybe BB paranoia runs in the Rousso family.

Paul, Bronte, and Tiffany were sitting pretty on the block after having been nominated and, obviously, in the running to compete in the Week 2 PoV competition. The two other players who competed in the competition were Da’Vonne and Zakiyah. The current HoH (Paulie) also competed.

The Eight Pack Alliance and Paulie devised a plan to backdoor Victor, so they were quite thankful that he was not chosen to compete for the coveted Veto, which would’ve ensured his safety for another week if he would have won. It looks like Mission Backdoor Victor is a total go. So, it looks like Paulie will choose to remove either Bronte or Paul.

What do you think about the results from this competition and how the game is currently being played by the contestants? Let us know in the comments below. Return for more spoilage regarding the ceremony results. Don’t forget to keep checking CDL for all your Big Brother spoilers, news, and updates.