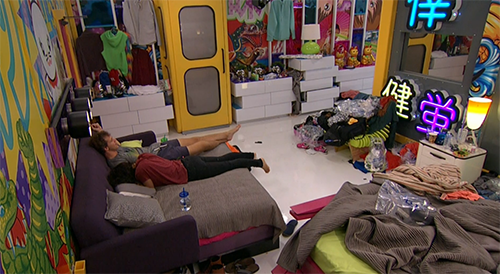 According to Big Brother 18 spoilers, Michelle won the Week 5 Power of Veto. The Power of Veto ceremony hasn’t occurred yet but we’re pretty certain that Michelle will choose to keep the nominations the same. She probably won’t use her newfound power to remove either Frank or Bridgette from the chopping block. The HGs waited all day for the competition to begin but it didn’t start until later Friday night.

After the competition, Michelle was, obviously, very happy to have won. Natalie (the competition’s host) congratulated and ultimately awarded her the prize. Supposedly, Michelle, Frank, and Bridgette were neck-and-neck towards the end of the competition. If that’s what actually happened, then it was a close race!

According to BB18 spoilers, the players who competed in today’s competition include Mama Day, Nicole, Michelle, Frank, James, and Bridgette. Sounds like it was a tough competition. It would’ve been hard to imagine any one of these players rooting for either Frank or Bridgette, let alone using their Power of Veto to switch up nominees. Now, given these results, it seems pretty unlikely that Michelle will be using her power to help out these folks.

Stay tuned to CDL to get all your Big Brother spoilers, news, and updates. We’ve been really excited for this season and can’t wait to see how the future game play shapes out. What do you think of these results and this season? Leave your thoughts and comments in the discussion section below. We want to hear from you!