Who Won Jury Battle Back and HoH: ‘Big Brother 18’ Spoilers – Victor Back in BB18 House – Nicole Whines Her Way to Week 10 HoH 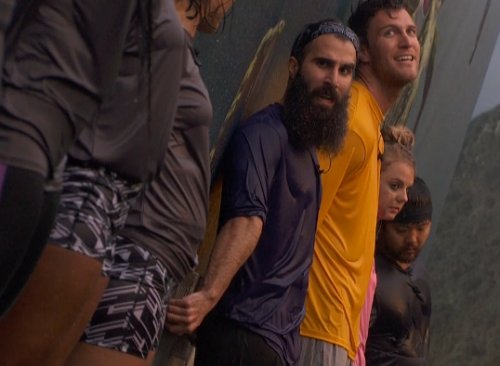 New Big Brother 18 spoilers from the Live Feeds reveal that Victor is the returning juror back to the BB18 house and Nicole won the HoH comp after begging and whining to James that she needed a letter from home. The comp was a wall endurance comp called “Welcome to Loch Mess.”

The competitors had to stand on a ledge and they had a wooden board behind them to hang onto. The wall tilted far forward and would hang there and then move back. Mostly they were kept at an angle and they were occasionally sprayed in the face and torso with cold water.

Just 30 minutes in, two of the jurors abruptly quit the comp! After much whispering, Zakiyah and Da’Vonne jump into the water together and gave up on the endurance comp wihtout explanation. That left jurors Bridgette, Victor and Paulie with the other houseguests. 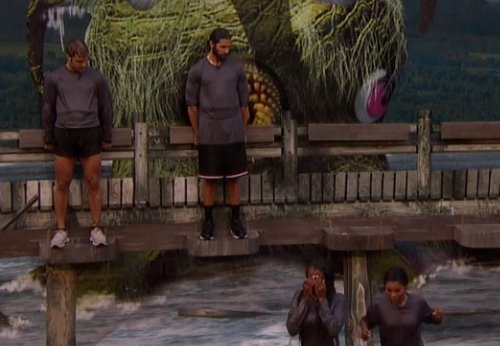 This could be a long night…

Paul was confused by their exit. The wall then tilted much farther forward and Nicole said it’s crazy. Paul did some running commentary as they were splatted with cold water. The guys asked Bridgette if Day and Zakiyah planned the comp suicide and she said no.

James started talking about how great the Jury House is and how much you get while in there. He said they give you anything you want and you can watch Netflix. The wall is very far forward and Corey couldn’t hang on and fell in. Tall guys never do well on wall comps.

Nicole complained she had too much eye makeup on and told James her eyelashes are stuck together. She looked like Tammy Faye Baker (there’s an 80s reference for you). Bridgette struggled and went down at 7:25 Big Brother time. 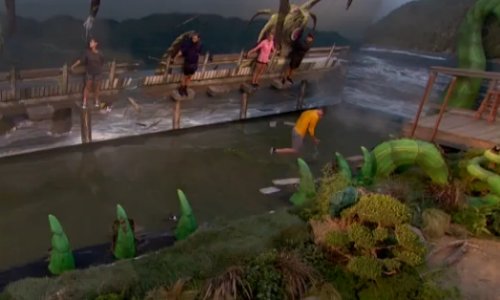 Recently evicted Victor and Paulie were hanging in but Paulie struggled and almost fell once while Victor seemed to be immovable. Natalie nagged James nonstop about how he’s scaring her when he joked about committing comp suicide and jumping.

As soon as the jurors fell off the wall, they had to leave the BB18 arena while Corey joined Natalie and Michelle on the sidelines to watch the rest of the comp. Looks like Big Brother doesn’t want them seeing this performance to influence their jury votes.

Meech and Natalie cheered Nicole for being the last woman standing. Paulie went down at about 7:40 and after that Victor, who had been stoic, admitted he was in pain. At that point, he had won the BB18 juror buyback though, and he’s going back into the house. 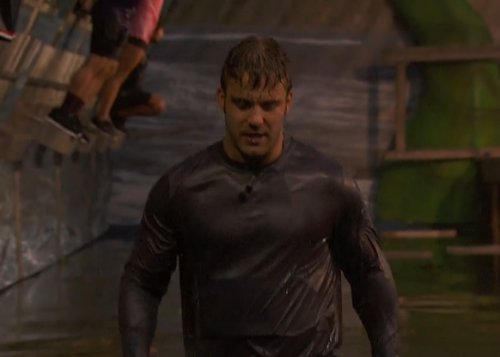 Paulie falls and then Victor

Paul encouraged Victor to hang tight. Meech and Natalie were even cheering and encouraging Victor but he fell a little over a minute later leaving Natalie, James and Paul battling for Week 10 HoH. Victor then went to chat with Corey and the girls to cheer on the remaining houseguests.

Nicole almost fell off but then went into squat mode beside James and Paul was the only one standing upright. James kept a close eye on Paul. They knew that if Paul fell, Nicole and James could cut a deal and end this since they are allies.

Paul fell at about 8:27 after looking like he was about to faint. James and Nicole immediately started whispering. Victor and Michelle sat chatting with the others while Nicole started whining to James that she really just wanted a letter from her mom. He said he wants to break the wall comp record. They were at an impasse. 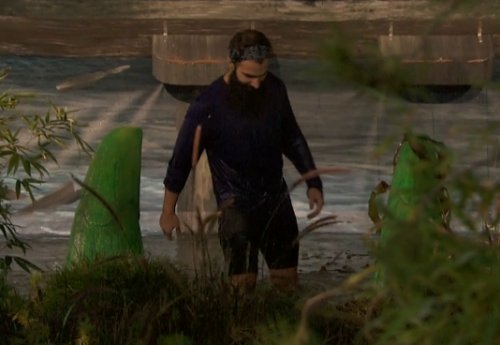 Nicole whines her way to a shady HoH win

Nicole kept working on James, whining and begging, and then joked that they will show her on the episode begging for the win. She kept on and James eventually admitted he had just one day left on slop – he had said he wanted the HoH to get off slop.

After James handed her the win, it will be super shady if Nicole nominates James or Natalie, but it’s more likely she will focus on returned evictee Victor and his beardy bro Paul. Share your comments below on Victor winning his way back into the house for a second time and Nicole’s whiny HoH win. And be sure to check back with

And be sure to check back with CDL for tons more Big Brother 18 spoilers including Week 10 BB18 nominations, PoV results and more.