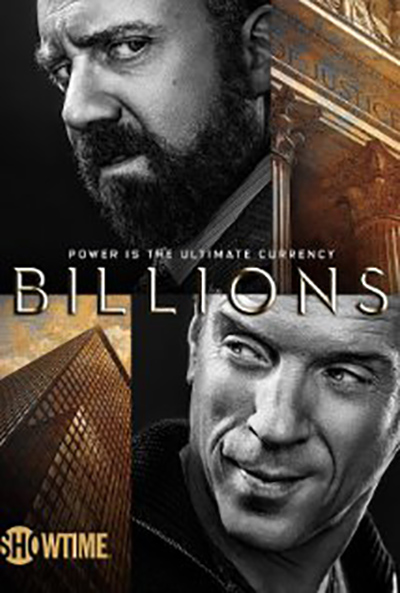 Showtime’s newest show, Billions, has made a good impression, which has led to the series being renewed for a second season! Billions has already set a Showtime record for number of viewers for a freshman series! Deadline is reporting that Billions brought in 6.5 million multiplatform viewers in its first week alone. If you happened to miss any episodes, you can catch up with our detailed recaps here.

IMDB has a rating of 8.4 out of 10 stars which speaks volumes for Billions in it’s early stages. Showtime boss, David Nevens told Variety, “The show is really a Trojan horse for examining our complicated feelings about class and wealth. We have this new class of the super-wealthy in this country. People aspire to have that kind of wealth, but we also are having the discussion about inequality and what’s fair and what’s not.”

If you’re not at all familiar with Billions, here is a brief description of the show from the Showtime site: Emmy® and Golden Globe winners Paul Giamatti and Damian Lewis star in a complex drama about power politics in the world of New York high finance. Shrewd, savvy U.S. Attorney Chuck Rhoades (Giamatti) and the brilliant, ambitious hedge fund king Bobby “Axe” Axelrod (Lewis) are on an explosive collision course, with each using all of his considerable smarts, power and influence to outmaneuver the other. The stakes are in the billions in this timely, provocative series.

You’re ready to watch now, aren’t you? And with the news of Billions already locked in for a second season (and hopefully many more to follow) you can watch with confidence, knowing that you won’t be robbed of a fantastic show once you’re hooked. Don’t you just hate it when you love a show, spend your time getting to know the characters, and then the network pulls the plug? That is the worst! So, like I said, you’re safe. Take comfort in a guaranteed two seasons, if not more of the Showtime hit, which airs on Sunday nights at 10 PM ET/PT.

Have you already been watching Billions? What do you think about it so far? Hooked and rejoicing that it has already been renewed? Share your thoughts with us in the comments below and then be sure to check back here at CDL for all of the latest news and recaps on Billions.