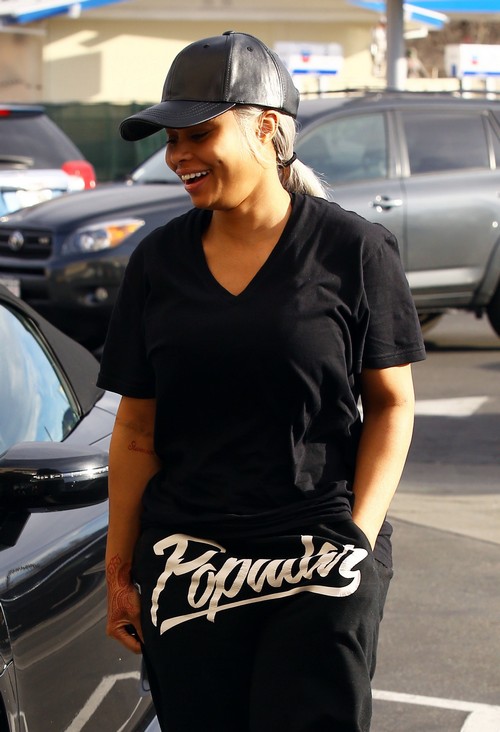 TMZ just broke the news that Blac Chyna was arrested for being drunk and disorderly in Austin, Texas while on her way to London. Looks like she was trying to make a connecting flight but had been boozing on her first flight and behaved so horribly that the cops were called.

Blac Chyna, former stripper and new love interest of Rob Kardashian, was nabbed by the police after they were alerted that she was making trouble at Austin-Bergstrom International Airport. Witnesses says she was loud and belligerent as she boarded the plane.

She then reportedly yelled “nasty ass bitch” at a flight attendant on the London-bound plane. Blac was taken from the plane by the police, cuffed, and hauled off. Other witnesses said she was obviously drunk and was fighting with the flight attendant.

You have to wonder how many drinks Blac Chyna was served on her LAX to Austin flight by Delta flight attendants. She was jailed on charges of public intoxication. Of interest is that witnesses said Blac wanted to tie her shoes as she was taken away and mentioned she was wearing Yeezys.

Do you think her new sweetie Rob Kardashian loaded her up with kicks from his brother-in-law Kanye’s collection? And doesn’t she know the cops will take away her laces once they book her anyway? It’s a hazard in a jail cell – even a drunk tank.

Rumor has it Blac Chyna has been hanging with Rob at Khloe Kardashian’s crib day-drinking with her new honey and Khloe kicked her brother out over it. Now it looks like Rob is crashing at Blac’s place but she took her liquor to go when she headed to London for some “work.”

This whole thing is a mess since Rob is Kylie Jenner’s brother and Kylie stole Tyga from Blac. Plus Blac was BFFs with Kim Kardashian until all the Kylie–Tyga action blew them up too. Maybe Blac Chyna got smart and cozied up to Rob K to get dirt on the Kardashian clan.

Blac Chyna and her new BFF Amber Rose are all about making their exes look bad. Amber just called out Kanye on Twitter about her playing with his rear. Is all this drama and hate what’s driving Blac Chyna to drink? Or is she trying to booze away the memory of her tryst with Rob?

More on the Blac Chyna arrest as news develops… Let us know what you think of Blac Chyna’s latest misstep in the comments below and come back to CDL for more celebrity news.

Update: Saturday 8:55 EST – Drugs (over 1 gram and less than 4 grams) were found on Blac Chyna (in Texas!) by police. Kris Jenner must really be angry with Rob Kardashian’s new relationship now.

Blac Chyna is seen stepping out without her boyfriend Rob Kardashian after meeting with his family in Calabasas earlier this morning, on January 28, 2016 by FameFlynet