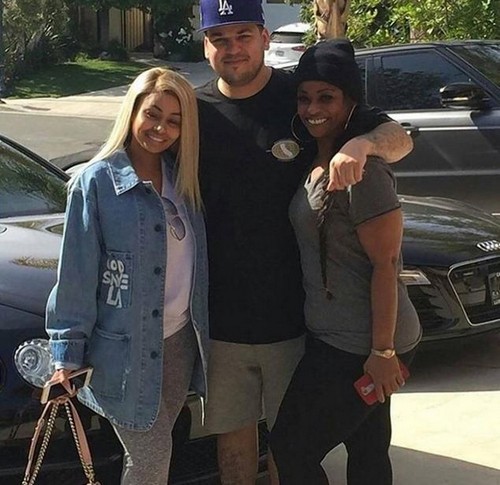 Blac Chyna’s mom Toyko loves Rob Kardashian and is ready for the couple to get married. Shalana Hunter believes Rob is absolutely the guy for Chyna. Toyko was in Los Angeles recently with her husband. Blac Chyna’s mom and stepdad visited with Chyna and Tyga’s son King Cairo. As long as Shalana Hunter was in town why not meet Rob and get to know Chyna’s new boyfriend?

Mom’s visit went well. Tokyo spent time at Chyna’s home getting to know Rob Kardashian. TMZ says Toyko could tell how much Rob loves Chyna because he treats her “like a queen.” Chyna’s mom thinks Rob is a good guy, well-manner with a great outlook on life. Who wouldn’t want such an amazing guy as a son-in-law? What’s not to love?

Just a few short months ago Rob was living as a self-indulgent recluse, according to Kim Kardashian. The poor little rich spoiled guy stayed home, ate junk food and played video games all day long. Rob gained so much weight that it seriously affected his health and he was reportedly diagnosed with diabetes last year.

Just days after moving in with his new lady love Rob was exercising, eating healthy and losing weight. Blac Chyna and Rob Kardashian went on a shopping for new clothes recently. Everything thing in Rob’s wardrobe is too big because he’s lost so much weight.

Rob’s queen treats him like a king. Chyna does the grocery shopping and cooks low-carb meals full of lean proteins and veggies for her man. Chyna has posted a few photos and short videos of the couple shopping and cooking together.

This could get interesting since Chyna’s baby daddy Tyga is dating Rob’s sister Kylie Jenner. Chyna and Kim Kardashian don’t get along either, not since Kylie stole Tyga away from Chyna. Kris Jenner isn’t a fan of Chyna’s either.

When Rob celebrated his birthday with Kim Kardashian, Kris Jenner and the rest of the Kardashians and Jenners in March Chyna was noticeably absent from the celebration. Maybe Chyna is just the bigger person and decided to let Rob enjoy the family party in peace.

Are Rob Kardashian and Blac Chyna headed for the altar? If Chyna’s mom has anything to say about we’re guessing wedding bells will soon ring.