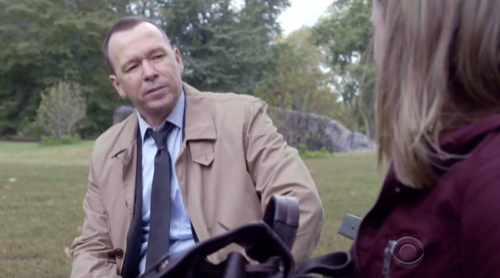 Tonight on CBS their hit drama starring Tom Selleck Blue Bloods airs with an all-new Friday, November 11, 2016, episode and we have your Blue Bloods recap below. On tonight’s Blue Blood Season 7 episode 8, Frank (Frank Reagan) deals with a sergeant who didn’t intervene in a robbery when he was off duty.

Did you watch last week’s Blue Blood episode 6 where when a key witness in Danny’s case was killed just before testifying, Erin angered Danny by enlisting Anthony (Steve Schrippa) to help him find the killer?  If you missed it we have a full and detailed Blue Blood recap, right here!

On tonight’s Blue Bloods season 7 episode 8 as per the CBS synopsis, “After Emily Harrison (Danielle Savre) tells Danny and Baez she’s concerned her abusive ex-boyfriend will repeat his behavior with his new girlfriend, Emily becomes the prime suspect when he’s murdered. Also, Eddie gets jealous when Jamie lets a young woman crash at his apartment, and Frank must decide how to discipline a sergeant after he fails to intercede during an armed robbery while off duty.”

A young woman came into the station and had asked to speak to Danny and Baez. The woman as it turns out was a friend of Emily Harrison’s and she said that Emily had asked her to speak to the detectives about Brandon. The friend whose real name was Liza Daniels was apparently dating Brandon Mitchell now and Emily was doing her best to convince her that it was a bad idea. But Liza had thought that the detectives wouldn’t back up Emily’s claims and had been a little surprise when they did though that didn’t change her mind about Brandon. So Liza chose to take Brandon’s side in the matter.

Liza believed that Brandon could never rape or torture Emily so she warned the cops that she would claim harassment if Emily didn’t back off. Though Emily didn’t want her friend to date Brandon because she just knew that Brandon would eventually hurt Liza. So Emily continued to stalk her friend however Baez and Danny did their best to reason with her. The detectives knew that their hands were tied and so they tried to tell Emily that there wasn’t much they could do. They couldn’t talk to Brandon because he could file harassment suit against them and they couldn’t keep eyes on Liza.

Liza had essentially made her own choice and they all had to respect that even if they didn’t like it. However, Danny and Baez had been on duty when they later heard about a shooting at Brandon’s place and they had gone there expecting to find Liza either injured or dead. So imagine their surprise when the person under the tarp was revealed to be Brandon. Brandon and Liza had been together at his brownstone when someone had rang the doorbell and Brandon had gone to check who it was. And before Liza knew it, she had heard gunshots and the gunmen had fled the scene while she was checking on Brandon.

Yet, Liza who claimed she didn’t see the shooter had also sworn that the shooter had been Emily. She had later told Baez and Danny that no one else would do this and so the detectives had to investigate that claim, but luckily they didn’t have to look for Emily. Emily had called them to say where she was and she had been perfectly willing to talk to Danny about what she did. So Emily didn’t hide the fact that she killed Brandon and she had even said that it had been in self-defense. Emily had said that she had gone over there to talk because she had wanted Brandon to leave Liza alone and that Brandon had reacted by grabbing her by the throat.

Emily then described that Brandon was laughing at her as kept squeezing her throat tighter and tighter. So that’s when she pulled the gun from her bag and shot him. Emily had said that was the only way to keep Brandon from hurting her again. However, things didn’t look good for her because she didn’t have any proof of what she claimed happened so Danny and later Erin had to stick with the evidence. The evidence was that Emily had gone to the house of a man she says she was afraid of, that it hadn’t been the first time that she had tried to intervene between Brandon and Liza, and that she had purposely brought along her gun. And so no one bought her story.

They just thought that Emily had been bitter and that’s why she had cried rape and even killed Brandon in the end. Though Erin personally knew better and so she had at least tried to offer a plea deal to Emily, but the Chief ADA put a stop to that. Erin’s boss had said that it all looked too well planned and it didn’t hurt that Brandon’s father had connections to the District Attorney’s office. So Erin had been put in an awkward position and the only person that refused to understand that was Danny. Danny felt that Erin should cut Emily a break and he later blew up at her at the Reagan dinner table because he thought Erin wasn’t doing the right thing.

The others at the table however, had thought that the siblings shouldn’t’ fight so Frank quickly put a stop to that. Frank had understood Danny’s position because he has had experiences with cases that have gotten too personal and what had stopped Frank for speaking up for Danny was the fact that he also understood Erin’s position. Erin like himself had a position where they had to follow certain set of rules. Frank had had an officer that was being crucified in the press and he hadn’t known what to do. But he managed to make everything worse and didn’t know how he became the villain to James Reed or Reed’s family.

James Reed had been in a bodega with his ten-year-old daughter Ashley when one day the place had gotten held up. Though James who was a sergeant hadn’t intervened. He had chosen instead to safeguard his daughter rather than to rush into the situation or help the store clerk. So he had ignored one of the police officer’s basic principles. He had seen someone that needed help and didn’t bother trying to defend the civilians so James had later gotten a flak for that. The newspapers had started to call James a coward and Frank himself had been told that he needed to discipline James. And so Frank put him on modified duty.

However, James had ignored what modified duty meant when he chose to rush in another dangerous situation as a way to prove that he wasn’t a coward. Modified duty was when the officers weren’t allowed to carry a weapon and so James had rushed into gunfire even though he was unarmed because he had already been taken to task for hiding once before. So Frank did end up blaming himself for what happened to James whose actions were as heroic as it was misguided, but he eventually chose to end James’s punishment because he did believe James was a good officer and so he didn’t mind if there was going to be some Commanding Officers that had a problem with it.

Frank though had gotten himself out of the uglier part of the job and later Erin was able to do the same. Erin had somehow convinced a high-powered attorney to take on Emily’s case pro bono and it turns out that Emily actually did have a case. Emily’s former friend Liza had apparently lied when she said she didn’t see anything because she had seen Brandon grab Emily by throat and so she was an eye-witness to Emily acting in self-defense. So Emily’s attorney had forced the Chief ADA into offering Emily a genuine plea deal and Erin had finally found a way to grant Emily the justice she deserved from the very beginning.

And yet what about Jamie. Jamie’s latest case which involved a young woman who was a bit of a damsel in distress and getting to know her too well had pushed Eddie’s buttons. Eddie was jealous of Tara and she didn’t like that Jamie had offered Tara a place to stay for a few days. So Jamie had accused Eddie of being jealous and Eddie had denied. Yet, Eddie did admit in the end that she does have feelings for him and the two ended up kissing before they agreed to ignore their feelings and just stay as partners.