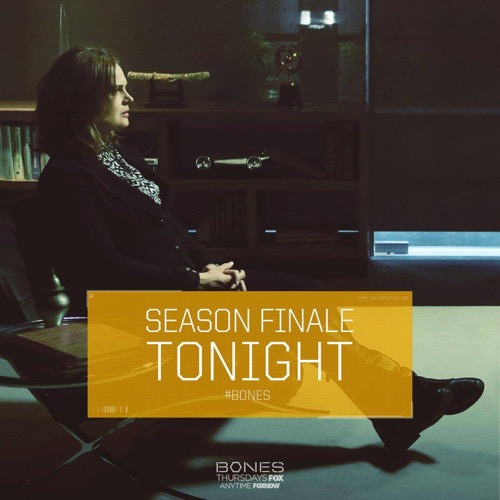 Tonight on FOX Bones airs with an all new Thursday, July 21, season 11 finale called, “The Nightmare in the Nightmare” and we have your Bones recap below. On tonight’s episode in the Season 11 finale, the search for the Puppeteer, a serial killer who turns his victims into marionettes.

On the last episode, a corpse at a glass recycling plant had a diamond stuck in its jaw, and Inspector Rousseau suspected a descendant of French nobility—who turned out to be the victim’s husband—may have had something to do with the murder. Did you watch the last episode? If you missed it, we have a full and detailed Bones recap right here for you.

On tonight’s episode as per the FOX synopsis, “in the Season 11 finale, the search for the Puppeteer, a serial killer who turns his victims into marionettes, continues, but Brennan can’t shake her guilt of failing to catch the perpetrator due to her brief period of retirement.”

Tune in at 8PM EST on FOX to watch season 11 Finale of BONES. We’ll also be updating fans right here as the show airs so be sure to check back in with our Bones recap. Brennan and Booth have had a long television run. Do you like that their characters mix up business with home life? Hit up the comments and tell us your thoughts about their tangled relationship!

Dr. Brennan was troubled on tonight’s episode of “Bones” and unfortunately, there was only one thing that she could do in order to get finally get a restful night at home. She would have to catch the Puppeteer. The Puppeteer or Puppito as Cam liked to call him was a highly intelligent serial killer that began his reign of his terror while both Booth and Bones had been retired. So the reason Bones was troubled by this particular case was because she blamed herself for a serial killer getting away with countless crimes before they finally caught on to him.

However, what Bones failed to grasp was that nothing could have stopped someone like the Puppeteer. The Puppeteer managed to stay under the radar in what looked like months before anyone found his victims. So he knew what he was doing even when no one else did. The Puppeteer, for instance, liked to target men and woman that were pillars of the community and were considered low-risk targets. So it seems that he liked the challenge that each represented and that he only went after them because some type of god complex. Where he gets to choose who’s safe and who’s not. And there were no clear rules.

And yet by trying to catch him, Bones had accidentally painted herself a new challenge. Bones and Booth had been the ones that had found the Puppeteer’s associate so he had seen them over the video feed as well as the first people he associated with his case. Afterwards, though, he had begun paying even more, attention to Bones when he realized that she was never going to stop looking for him. So the few times that Bones felt like someone was watching her wasn’t that far off the mark because the Puppeteer’s next victim ended up sharing a lot of qualities with the doctor. Melissa who wasn’t like the other victims had been found in an old abandoned building that was being turned into a charter school.

Though Melissa stood out because of how much she liked like Bones. Melissa’s hair had been cut to look like Bones and the victim had also been dressed to look like Bones however that last part had been because the Puppeteer had dressed her in some of Bones’ old clothes. So the Puppeteer wasn’t even pretending to be subtle. He had been sending a very clear message with Melissa and it had been that poor Melissa hadn’t mattered. Instead, Bones was the one he wanted.

Bones had interested the serial killer and he had become so obsessed with her that he had killed someone else as a substitute. So everyone at the Jeffersonian wanted to know what would happen if the serial killer grew bored with plain substitutes? Yet, Booth hadn’t wanted to await around until someone like the Puppeteer made a move. The reason the Puppeteer had been given such a name was because what he did to his victims after he killed them. The Puppeteer you see didn’t just play dress up with the bodies, he had also attached them to hooks in order to hang them up as if they were living dolls.

So the serial killer was a quite a scary guy although he was smart enough to not give too much away. Melissa’s death and the symbolism attached had been very clearly in your face, but that didn’t tell Booth much about the guy he was looking for so he and Aubrey looked into Melissa. Melissa was apparently going through therapy because she had been having dreams as well as. Though Melissa had told those close to her that she had been seeing her killer in her dreams.

Naturally, Booth and Bones were unsure about that claim and didn’t care to pursue it. But later Bones’s nightmares came back and so Bones wanted to speak to someone about it. So she went to go see Melissa’s therapist because she needed to talk to someone and thought that he would help yet Booth hadn’t felt comfortable about that. Booth had secretly thought that he should be enough for his wife to feel safe. And so he pursued the case by managing to track down another associate of the Puppeteer and, while that man had just been used by the serial killer, it had given Booth some perspective.

Booth had told Aubrey that the Puppeteer liked sticking to a pattern. He would find men of low intelligence that could easily be manipulated to act as his unwilling associates and he would pick the same type of people for his victims. So what Booth wanted to know was why the killer had changed his MO for Melissa. He felt that the Puppeteer couldn’t’ have changed everything simply because Melissa and Bones shared a passing semblance so he had asked Aubrey for his opinion. And Aubrey thought that Melissa being a warning didn’t make sense either.

He said if anything that had made Bones hyper vigilante. So the next person that Booth ended up suspecting was Melissa’s therapist. Booth thought that therapist had hoped Bones would come to him for help if Melissa died so Booth had gone on to arrest the other man because he suspected him. However, it wasn’t the therapist who had actually helped Bones realize who the true serial killer might be. The therapist had apparently walked her through some of her nightmares and that had revealed certain things to her that she wasn’t sure about until her former intern Zach later kidnapped her from the lab.

He was the intern that went over to the darkside and began working for another serial killer that convinced him cannibalism wasn’t all that bad! So Bones was alone with a guy like just as Booth was figuring out he had been wrong about the therapist.