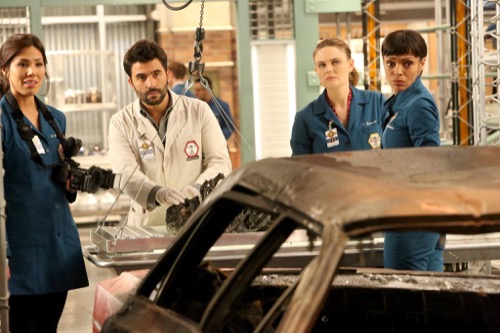 Tonight on FOX Bones airs with an all new Thursday April 21, season 11 episode 12 called, “The Murder of the Meninist” and we have your recap below. On tonight’s episode a body found in a car crash is identified as a leader of an organization that promotes men’s rights, but the investigation leads to an intense clash between Brennan (Emily Deschanel) and the deceased’s cofounder.

On the last episode, Hodgins’ rehab continues eight weeks after the explosion that left him paralyzed, but he’s not quite ready to accept spending the rest of his life in a wheelchair. Did you watch the last episode? If you missed it, we have a full and detailed mid-season finale recap right here for you.

On tonight’s episode as per the FOX synopsis, “a body found in a car crash is identified as a leader of an organization that promotes men’s rights, but the investigation leads to an intense clash between Brennan and the deceased’s cofounder. Meanwhile, Hodgins’ bitterness creates dilemmas for Angela and the staff; and Booth thinks his wife is a jinx for his beloved Philadelphia Flyers hockey team.”

Tune in at 8PM EST on FOX to watch Season 11 Episode 12 of BONES. We’ll also be updating fans right here as the show airs so be sure to check back in with us. Brennan and Booth have had a long television run. Do you like that their characters mix up business with home life? Hit up the comments and tell us your thoughts about their tangled relationship!

#Bones starts with Booth telling Bones she’s bad luck for the Flyers. She says no such thing. Hodgins and Angela meet them at the diner and he’s grumpy. Angela says he hasn’t done PT in a week and says he hid the truth from her that he has no neural recovery.

They get a call about bones from a car crash and need to get an ID. Rodolfo and Bones check the body while Hodgins looks over the car and gets snippy with Angela. He can’t reach something and is frustrated that his legs are holding him back.

Aubrey talks to Allie who sold the carburetor to the guy in the junky car. She says the guy came in the store all the time and seemed like he had money. She says he was a major wang and totally rude. Allie is chatty and odd and she fangirls on Aubrey.

She says she can’t believe she’s at the FBI and takes a selfie with him. Hodgins is overrun in the hall by people and irritated. Then he looks at the platform that he can no longer access and all the stairs around him. He looks at Cam and Rodolfo working then turns away.

Hodgins goes over to the lift and raises him and his chair up to the platform. Rodolfo finds a strange injury on his skull and they decide it was no accident. Hodgins says it was exhilarating when Cam asks how he liked the lift and he snarks.

Hodgins shows them the guy had a Lexus and they wonder why then would he have been driving a junker that burned to the tires. Angela shows Bones a partial reconstruction she made of the victim. She has his melted cell phone and wallet and is using a laser cutter to get into it.

Bones misquotes Star Wars then asks about Hodgins being snippy with her. Angela says it’s a stage of dealing with trauma. She says it’s part of for better or worse. She turns off the laser and looks at what’s inside.

The credit cards seem to be fused from the fire. Angela pulls out a chip that is from a credit card. She scans it and gets his name Emil Bradford. Aubrey tells Booth he’ll get Emil’s phone records then hands Booth a box of donuts.

He says he knows he’s had it rough with the Flyers and Booth says she’s a jinx. Aubrey says jinxes are real and he needs to cut Bones loose and can’t let her watch with him. He says she won’t like him putting hockey first.

Rodolfo tells the team about remodeled fractures from 5-10 years ago and the radius and ulna too. Looks like the guy had some late night ER visits during a divorce. Cam wonders if he was the victim of domestic violence and Rodolfo scoffs.

He says real men don’t get hit and Cam says his bias proves why men won’t admit if they’re beaten by their women. Cam goes to ask Hodgins about the auto-autopsy. He’s still glum but says the fuel line ruptured when the car went off the road and fused the trunk shut.

Cam says she doesn’t need him anyway when he refuses to help. Aubrey and Booth go see Emil’s ex and she calls him a cheap SOB who was trying to reduce her alimony. She calls him a sad sack and says he never held down a decent job while they were married.

Booth asks if that’s why she beat him. She says no way would she kill a guy paying her $10k a month in alimony. She says his life revolved around a men’s right group called Men Now. She says that was all he cared about and was his whole life.

Cam delivers the good from the trunk after Hodgins pries it open. Inside are charred papers and Angela says they look unrecoverable. Then Angela says she’s been looking at the Man-o-sphere and says they call themselves meninists.

Angela shows Cam a video posted by Emil who calls women lesbanese man haters and says the plot is to get rid of the male species. Cam and Angela are stunned. Karen answers the door at Men Now and they’re surprised. She says she supports the Men’s Rights movement.

Booth flashes the badge and they tell Karen that Emil Bradford is dead. She says she saw him last Thursday and she thought he was working from home. She says her husband Paul co-founded Men Now. She says he’s in a membership meeting now.

Booth doesn’t care and he and Bones go inside. Paul talks to men about how family courts have bias towards women and that women should have to register for the Selective Service. Bones agrees until he says if you dress like a slut, it’s like wearing a “rape me now” sign.

Rodolfo calls Hodgins to look at the bones and he asks why he didn’t bring it to him and Rodolfo says no special treatment and he thought Hodgins would prefer it that way. Rodolfo says he thinks a triangle shaped object did this.

They both agree that Emil had it coming and Rodolfo says a man who treats a woman badly deserves what he gets. Hodgins doesn’t like him busting on him for being pissy with Angela and rolls out annoyed. Paul and Karen meet with Bones and Booth after the recruiting session.

Paul explains that they have junkie cars because they get attacked by angry women. Bones says he was struck in the head and asks Paul if he knows who might have attacked him. Paul says Leah Moreno the head of Women for Change.

Paul says she hassles them, hacked their website, and protests them at every angle. Bones belongs to that organization. Angela works in the lab when Hodgins comes in. He’s a jerk again and she says stop treating me like this – he says he’s just busy.

She shows him her test she ran and he mocks her then rolls away. She’s annoyed. Cam starts her body BBQ and Booth asks Bones about belonging to Women for Change. Bones tells him what WFC does and talks about the protest for equal pay.

Booth then brings up her causing the Flyers problems. He wants her to stay away from the game. They show up to the protest Leah Moreno is leading and Booth reads her some threatening messages from WFC about Emil.

Leah is uncooperative when they try to talk to her and stirs up trouble thinking that the company they’re protesting got the FBI involved. Booth has no choice to pull her away from the protest which makes the women yell at him.

Aubrey asks Leah about Emil. She says she wouldn’t let him undo her progress. She says Emil harassed her at home and work then two weeks ago it stopped.

Booth tells Bones that his call records show he was mostly talking to Paul and Karen.

Bones insists on watching the game. Booth shows a WiFi contact from a hotspot.

They track it down. Hodgins tells Cam someone busted the car lights before Emil wrecked. Hodgins tells her the pork project will fail then it blows up and gets on him.

Cam shows them the documents she recovered. It’s about fighting back against circumcision.

Looks like Dr Gould was Emil’s new target. Angela says the lawsuit could have ruined her medical practice.

They wonder about that as a motive for murder.

Aubrey talks to Dr Gould about Emil and he was handing out flyers outside the hospital just before he died.

She admits to talking to Emil. They have the tire iron from her car and she admits to smashing his lights. She says she and Emil talked and he apologized to her and said he was talking about shutting down Men Now.

Rodolfo doesn’t like Men Now but Bones says they have some strong points. Rodolfo points out a back fracture.

Bones says he was smashed in the face then he fell back and hit his neck that would have killed him.

Rodolfo says check out Paul but a Bones says the wife could have done it.

Cam is back on the pigman experiment and Angela comes to tell her she got a time to death.

Angela says the hotspot was also found. It’s from Karen’s phone. They bring Karen in.

She says Emil lied to Dr Gould and says it was something they told angry women to end confrontations.

Paul shows up with a lawyer. He says keep your damned mouth shut. Bones gets mad when he calls her a bitch.

Bones punches him and Paul says he’s suing and will file charges.

Aubrey tells Booth his wife has a great punch. They wonder why Emil was with Karen.

Karen’s boss says she was at work all night. Rodolfo says Bones will be punished for this.

Bones finds a burn mark made after his death. Bones thinks he was hit with an iron.

Angela shows them that Emil and Karen shut down his ex wife’s security system.

She says Rob did it and the guy says she killed Emil and hits him too. Aubrey finds blood on her iron.

Angela finds a spinal cord injury survivor site open on Hodgins computer. She says she’s happy he joined a group and he gets angry.

He says she doesn’t know what she’s talking about. He lashes out. Then he says deal with it or go he. He rolls away.

Bones and Booth get ready to watch the game. They talk about who did the killing. Bones has F letter snack foods.

She’s trying to reverse the jinx and suggests he turn his pants around.

The game starts and they bicker good naturedly.