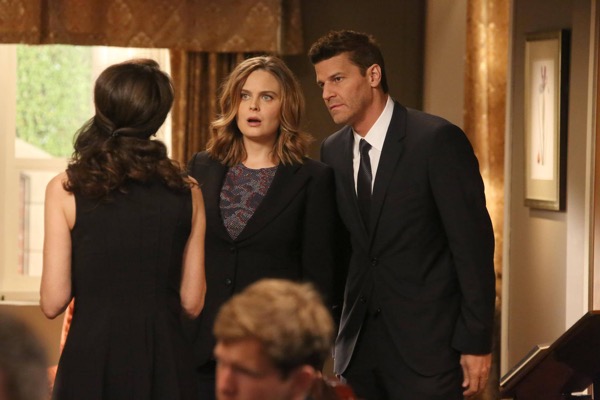 Tonight on FOX Bones airs with an all new Thursday June 23, season 11 episode 20 called, “The Stiff in the Cliff” and we have your Bones recap below. On tonight’s episode a billionaire explorer’s remains are discovered in Antarctica 10 years after he disappeared, but the Jeffersonian’s Dr. Clark Edison winds up on a list of murder suspects since he was a member of the expedition.

On the last episode, the death of a professional hockey player was investigated after his headless corpse was found in a river, and Booth’s love of the sport proved to be an asset in the case. Did you watch the last episode? If you missed it, we have a full and detailed mid-season finale recap right here for you.

On tonight’s episode as per the FOX synopsis, “a billionaire explorer’s remains are discovered in Antarctica 10 years after he disappeared, but the Jeffersonian’s Dr. Clark Edison winds up on a list of murder suspects since he was a member of the expedition. Meanwhile, Cam clashes with her sister when she arrives in town to help with her wedding plans.”

Tune in at 8PM EST on FOX to watch Season 11 episode 20 of BONES. We’ll also be updating fans right here with our Bones recap as the show airs so be sure to check back in with us. Brennan and Booth have had a long television run. Do you like that their characters mix up business with home life?

A frozen body was found at the site where a billionaire explorer was last seen ten years ago on tonight’s episode of “Bones” so everyone at the Jeffersonian were truly excited when it was their lab that was chosen to identify the victim.

However, there was one person that truly was upset to find out that the body did in fact belong to the late Henry Charles and that was Dr. Clark Edison. The doctor had apparently been an intern in the archeology department on Henry’s last expedition and therefore he had known the victim personally. Edison later told the rest of the department that Henry had been charming and that everyone who knew him liked him yet Bones ended up telling Edison that there was at least one person that didn’t like Henry. Like his killer for instance.

Bones it seems had found several fractures on the skull that indicated the victim had been killed by blunt force trauma. So she had figured out that one of the five people that had gone along with Henry on his last expedition must have killed him, but sadly that also meant that Edison was a suspect because he was on that trip. Although, what many at the lab found odd was that Edison never mentioned that he had been on one of the most expeditions in modern history before the body had been found. And so that did beg the question of what really did happen on that expedition.

Yet, Booth and Aubrey weren’t going to be getting any answers from Edison. After he had been removed from Henry’s case because he was a suspect, he quickly lawyered up and refused to answer any questions without unless his lawyer’s ok. So that left the feds to piece together on their own who might have had grievances with Henry and they started by questioning the one man that that Henry didn’t want on his team. Henry had looked for certain people to join, like those at the top of their field, so he hadn’t wanted to go with someone he considered to be third rate though he still chose that man because he was the only one available.

And the man that did become the Lead Archaeologist on that expenditure has gone one to sell a lot of book since then chronicling his heroic journey. So Booth and Bones questioned the guy and while they might find him a little pompous, they couldn’t exactly refute the story he told them. He said that Henry was a friend and that Henry probably would have gone to fund further expeditions if he hadn’t gone missing. Though both he and Edison weren’t really handing out that much details about what happened so later the Jeffersonian had to go through the many archaeological journals to piece together a timeline.

The timeline they initially worked with showed that a young woman had been near Henry during his final hours and that she had worked at the same site where Henry must have fallen eighty feet. Once someone had hit him with an ice axe that is. Yet, the young woman hadn’t actually been near Henry. Dr. Hazel Mitchell had said that she had been taken off duty that night by Henry’s right hand man and that she spent the rest of the evening with Edison. A man that she was sleeping and who could provide her an alibi.

But Edison still wasn’t talking. Wendell had tried to talk to him about Hazel and see if he could provide her an alibi yet Edison was literally stuck on what his lawyer told him. He refused to back anyone up or even discuss the expedition with his friends. So Booth and Aubrey decided to talk to Henry’s right hand man. Declan Marshall had been with Henry for years and there had been a minor incident a few years before the expedition. Henry had been at on his boat when his friend who supposedly great at the outdoors had “accidentally” shot him with a spear gun.

The wound that Henry had been left with hadn’t been that much, but an accident like that happening not long before he was murdered had made some wondered if Declan had tried to kill his employer before the expedition. Though Declan later defended himself because he said the accident hadn’t been his fault. He said that Henry hadn’t really known that much about the outdoors and that often he had to protect Henry from himself. So Declan explained that’s also why he had the helicopter fly in early and remain hidden until they needed it.

So that meant the helicopter pilot was technically in the area and that she was the only person unaccounted for at Henry’s time of death. However, Alice who admitted to not being that much of a fan of Henry’s had gone to point the finger at someone else. She said that she saw Henry arguing with a member on his staff and that it had look pretty heated, but what no one knew was if Henry was arguing with his killer or with Edison. Edison and his lawyer did arrive for an interview with Booth when it was proven that he had been in the same hut as Henry on the day he died.

Edison said that they had gotten into an argument and that he had even punched Henry because he found out that Henry had been sleeping with Hazel. Hazel being the woman that a young twenty-year-old Edison was obsessed over and the reason he lied about many of Hazel’s test results from that expedition. So Bones and Booth were having a pretty hard time proving that Edison wasn’t the killer because he did have motive and had freely admitted to assaulting the victim on the day he died. Yet, Bones had remembered something. She remembered a certain pompous author that forgot certain details in his book.

Marcus Eldridge had claimed that they found members of the Frank party whose boat had crashed there back in the 1800s and that he had seen evidence of cannibalism. But Bones was able to disprove that and show that Marcus had faked the cannibalism as a way to drive up book sales. So Bones and Booth had thought Marcus was their guy however there was someone else on that expedition that had just as much to lose as Marcus. Like his protégé for instance who would have been discredited if her mentor was proven to have faked archaeological evidence.

And that protégé happened to be Hazel. Neither Hazel nor Marcus were great their job, but they were willing to do anything as long it got them ahead. So Hazel had been the one that killed Henry and she had done so because Henry had foolishly gone to her for help in proving that Marcus was a fraud. Though when Edison later realized he faked data for a murder, he had tried to hand in his resignation and Bones had refused to take it. She said that Edison had been young at the time and that he should be allowed to make a mistake.