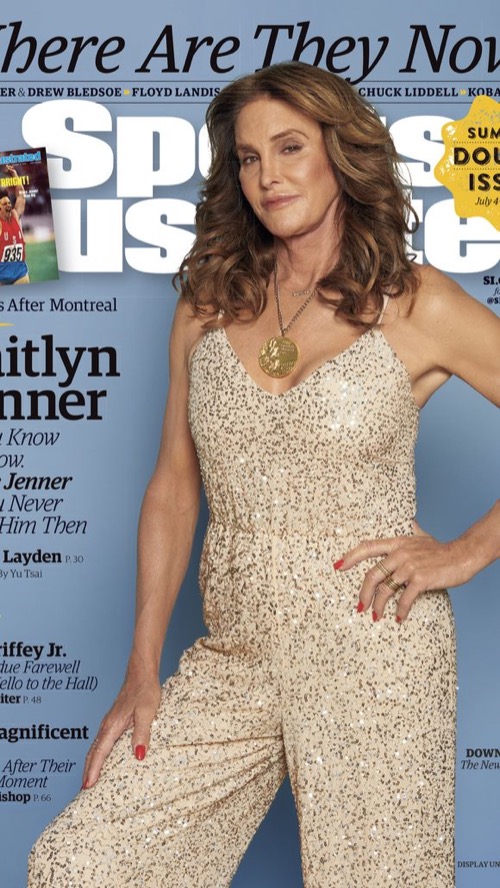 Like her or not, Caitlyn Jenner knows how to make a splash and this time it’s on the cover of Sports Illustrated. Lately, Caitlyn has been known for her sexy outfits but now she’s making a statement by wearing the 1976 Olympic medal she won as Bruce Jenner.

It’s been almost 40 years since Caitlyn Jenner won her medal at the Olympic games. Since then she’s gone through some major life changes – husband, father, transitioning to a woman, and now becoming a transgender advocate.

Some naysayers have taken issue with Caitlyn Jenner wearing, let alone keeping, the medal now that she’s transitioned. Some critics went as far to say she should give it back since she’s no longer Bruce. But Caitlyn made it clear she will hold on to that part of her life.

Asked why she wore the medal for the cover, Caitlyn said, “It’s a picture that brings attention to this issue [of trans rights]. That’s the important thing. That’s why I wore the medal.” Caitlyn’s statement seems to show that her journey as a trans woman is more significant to her than a medal.

Discussing her Olympic win isn’t something Caitlyn seems to prefer to talk about, but she recognizes the medal, which she kept in her nail drawer, is responsible for getting her where she is now – both a trans-advocate and an Olympian.

Caitlyn told Sports Illustrated about the medal, “I’m very proud of that part of my life. And it’s not like I just want to throw it out. It’s part of who I am. What I’m dealing with now, this is about who you are as a human being.”

Since her transition, Caitlyn has served as a strong voice for those of the LGBT community struggling with their gender identity, despite receiving flack for supposedly wanting to abandon her new identity.

Yet Caitlyn has faced criticism as well and has yet to undergo sexual re-assignment surgery to make her transition complete. As recently as a few months ago, there have been rumors that Caitlyn regrets transitioning and that she wants to detransition.

Ian Halprin, a Kardashian biographer, reported that he has heard from several sources that Caitlyn is considering transitioning back to a male within the next few years. Through her rep, Caitlyn Jenner denied this rumor to Fox News in an email.

What are your thoughts on Caitlyn Jenner wearing her Olympic medal on the SI cover? Do you think Caitlyn is really comfortable with her transition? Or is she considering reversing what she’s had done? Tell us in the comments and be sure to check back with CDL often for all the latest celebrity news and gossip.