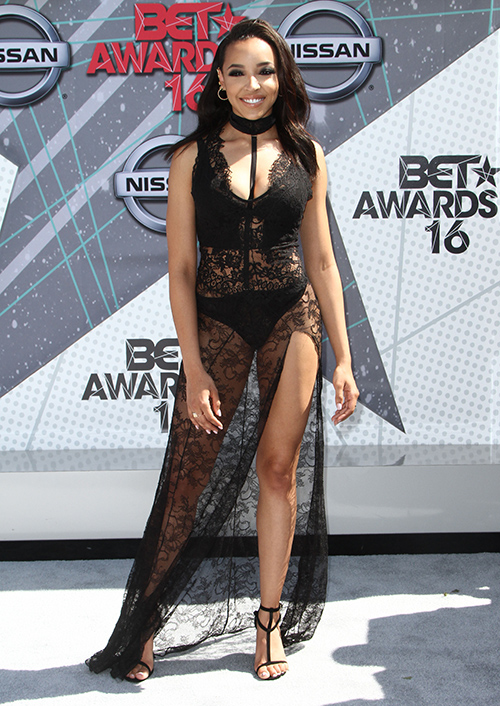 Taylor Swift’s awful start to the week is about to get even worse. There’s a new report that says Taylor Swift’s ex-boyfriend Calvin Harris has a new woman by his side, and it’s none other than Kanye West’s friend, the singer Tinashe.

The Taylor Swift/Calvin Harris breakup still has the celeb world talking about how the singer did the Scottish-born DJ wrong by moving on so fast with her new boyfriend, Tom Hiddleston. If that weren’t enough, Taylor Swift is also being accused of ‘playing the victim card’ by suggesting their break up was all Calvin’s fault, just because he didn’t publicly acknowledge her songwriting credit in his mega radio hit, ‘This Is What You Came For.’

And now Calvin Harris is definitely hitting the ‘Bad Blood’ singer where it hurts the most by hooking up with Tinashe, who just so happens to be good friends with Taylor Swift’s public enemies, Kanye West and Kim Kardashian. The reality television star called out Taylor for apparently lying about giving her approval for Kanye West to put her name in the lyrics of his song, ‘Famous.’

Calvin Harris and Tinashe have been spending a lot of time with one another as close friends say that it will only be a matter of time before they come out together as a couple. One source told Page Six, “They have been seeing each other on the DL. It’s only been weeks, so it’s still pretty casual right now. They’ve been on a few dates.”

Calvin Harris and Tinashe supposedly met two years ago when they were rumored to have collaborated on new songs for Rihanna. Still, this is not good news for Taylor Swift, who not only loves to dominate the headlines, but clearly hates being threatened, especially when it comes to new, hot talent in the entertainment world. If Kanye West loves Tinashe, then that can only mean it will be a matter of time before she becomes to the hottest new singer on the charts, leaving Taylor Swift reeling with bitter jealousy.

Plus, Tinashe is everything that Taylor Swift is not. Sources close to the DJ said last week that he was looking for a hot brunette with huge sex appeal. In other words, someone who looks nothing like Taylor Swift. If Calvin Harris is trying to make Taylor Swift jealous, it will only be matter of time before we find out whether his plan has worked. Knowing how she operates, a Taylor Swift Tom Hiddleton engagement is something we might see sooner than later, all depending on how hungry or desperate the blonde singer is for attention.