‘Castle’ spoilers for Season 8 Finale Episode 22 ‘Crossfire’ tease that the episode will see Rick Castle (Nathan Fillion) in dire straits and he’s warned of a tragic fate to befall Kate Beckett (Stana Katic) by the end of the episode.

The Season 8 finale starts when Kate and Castle get a solid lead on LokSat and are ready to make a move. Vikram Singh (Sunkrish Bala) is back for the finale – he’s the guy who sent the LokSat memo to Agent McCord and her team who were eventually killed.

To catch you up – LokSat is a code word for a secret drug running and money laundering operation. It was associated with covert CIA ops and Senator William Bracken (Jack Coleman). Kate and Castle first saw the word LokSat written in the margin of a memo sent to Bracken. 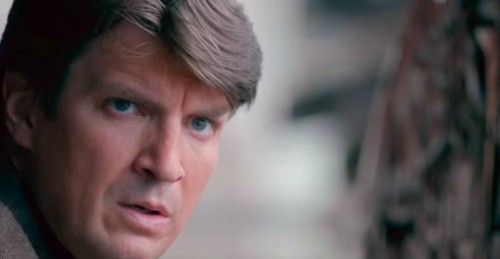 Bracken was the guy who ordered Kate’s mom, Johanna Beckett, killed back in the day. Beckett arrested Bracken as he was starting a run for President. LokSat was associated with Bracken, Vulcan Simmons (Jonathan Adams) and a dangerous and dirty analyst who works for the CIA.

Kate mentioned LokSat to Bracken when she went to see him in prison and then he was also murdered. Both Simmons and Bracken are dead, but it appears that LokSat is still rolling along without them. Guest star Jed Rees (you may remember him from Galaxy Quest) portrays Mr Flynn.

Flynn looks to be the brains behind LokSat and is the mysterious CIA analyst. We’ll see Flynn with Castle and he has the writer strapped to a medical table with an IV ready to inject something into him – looks like a high tech facility – maybe CIA related…

Flynn tells Castle, “Kate Beckett will be dead by the end of the night and there is nothing you can do about it.” Later Flynn tells Castle, “Everything ends in tragedy, even an epic love story like yours.” In other scenes from the trailer, we see Hayley Shipton (Toks Olagundoye) with Kate and Castle at a loading dock.

Hayley is ready to take out threats with a rifle while Kate and Castle hide behind pallets with guns at the ready. But then things go south and Kate tells Castle that “this is a trap” but it’s too late by then. Kate may sacrifice herself to save Castle – it looks like a touching farewell between the two. 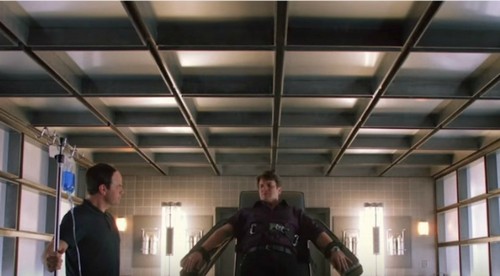 Caleb Brown (Kristofer Polaha) is also back – he’s LokSat’s lawyer and an occasional NYC public defender who is big trouble. The promo trailer for the Castle finale shows a devastated looking Martha and Alexis hugging Castle which adds to the vibe that Kate dies as Flynn promised.

There were two versions of the Castle Season 8 finale filmed, but it looks like we will see the version where Kate Beckett dies (to facilitate the exit of Stana Katic) and it sets the stage for a Season 9 renewal. The decision date for the renewal was May 6 but official word has yet to break.

Despite no ABC announcement, news has leaked that Nathan Fillion has renewed plus Seamus Dever (who plays Kevin Ryan) and Jon Huertas (who plays Javier Esposito) have also renewed for a rumored 13-episode Castle Season 9 which may be the last call for ABC’s Castle.

Castle showrunner Alexi Hawley said in an interview that if there is no Season 9 renewal, the Season 8 finale will be marketed as a “Series Finale” but the ABC page for Castle clearly lists Season 8 Episode 22 as a “Season Finale” so all signs point to renewal and the Kate death version.

Hawley also said that he hoped the alternate ending (which would tie up any loose ends to give resolution to the series) would never see the light of day. Looks like Hawley will see that wish granted.
Prepare to say a final goodbye to Kate Beckett on the ‘Castle’ Season 8 Finale Episode 22 ‘Crossfire.’

Share your comments below on whether you plan to watch Castle without Stana Katic next season and be sure to check with CDL for a LIVE recap of the ‘Castle’ Season 8 Finale.