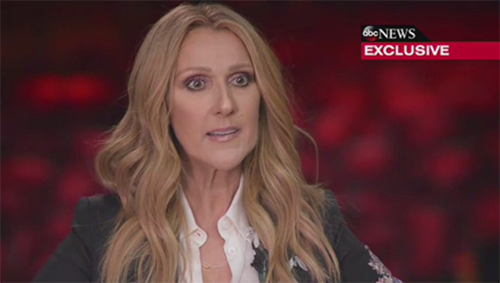 Four months after Renee Angelil’s death, Celine Dion is talking about how she used the Disney movie ‘Up’ to comfort her children and explain Papa’s passing. Celine spoke with ABC News correspondent Deborah Roberts and the interview will air on ‘Nightline’ Wednesday, May 18.

Celine revealed that before telling five-year-old twins Eddy and Nelson that Rene had died the ‘My Heart Will Go On’ singer reminded the boys that everybody gets sick. Then, Celine referenced one of the twins favorite movies, Disney’s ‘Up.’ Celine asked them if they remembered Ellie going up in the balloon.

“You know, today Papa went up because Papa was very sick.” Celine told Eddy and Nelson. Celine explained to her young sons that Papa was not coming back. “Where’s Papa again? I wanted to make sure that they had it, up. The only thing I wanted was for them to say up. Up is a good thing, up is uplifting.”

This is the first time Celine Dion has opened up about how she explained Rene’s death to her children. She also talked about life after Rene Angelil during her first television interview since losing the love of her life.

“I saw him suffer, and that is the worst,” an emotional Celine explained to Deborah Roberts. Celine revealed that though Rene no longer lives with her physically, he continues to live in her heart and her mind.

Rene Angelil died just two days before his 74th birthday on January 14, 2016 after a long battle with throat cancer. In the final moments of Rene’s life, Celine told her husband of 21 years that it was okay to let go of the pain and the suffering. “I want you to just go in peace. I want you to not worry.”

Celine Dion will appear at the Billboard Music Awards on Sunday, May 22 to perform a cover of the Queen song ‘The Show Must Go On’ and accept the Icon Award.