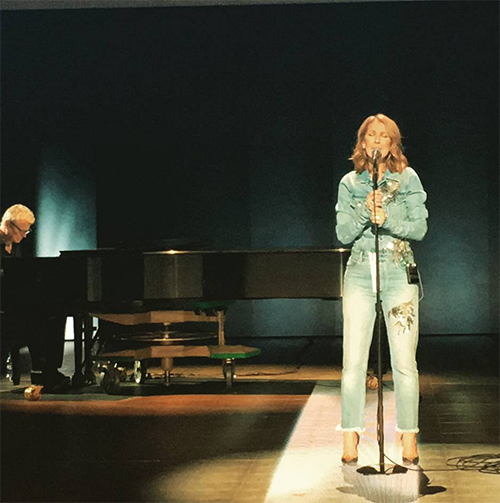 Celine Dion has always had an enviable figure in the celebrity world, but her recent appearance has shocked both her closest confidants and her fans as well. In fact, some even believe that workaholic Celine Dion’s drastic weight loss is because she’s still working as hard as she did before her husband Rene Angelil’s death.

Supposedly, Celine Dion is carrying out Rene Angelil’s wishes by getting back on stage and working harder than she ever did during her very successful career.

According to Radar Online, sources say that everyone is worried that a Celine Dion breakdown might happen sooner rather than later if the singer continues to work rigorously. Apparently, Celine Dion won’t admit to it, but her weight loss is taking a toll on both her mental and physical health, as she’s nearing the point of exhaustion.

One tipster said, “Celine’s shed at least seven pounds from her already thin frame and she’s struggling to keep going. Her schedule is completely insane, but Celine keeps going because in her mind ‘It’s what Rene would have wanted.”

Celine Dion and Rene Angelil’s marriage might have been a controversial one, as many critics questioned the huge age gap between them and the fact that Rene Angelil was not only the singer’s husband, but her stage manager, too. While there’s no doubt that Rene Angelil played a very instrumental part of Celine Dion’s success, he surely didn’t want to cause her harm by pushing her any harm or hinder her well being in any way.

Celine Dion and Rene Angelil’s marriage was one full of love and support and the singer is doing nothing but punishing herself by working her body to near exhaustion. Unless someone in her inner circle steps in to stop her, Celine Dion might end up having a breakdown if she continues to hide her pain by her working herself to the bone.

Tell us CDL readers, do you think Celine Dion’s weight loss is because of her hectic schedule? Is Celine Dion’s health at risk because of her thin frame? Let us know what you think in the comments section below. Also, don’t forget to check back with CDL for all the latest updates on Celine Dion and all of your favorite celebrities right here.

Thank you for your generosity. Let’s Stand Up to Cancer. #su2c

Thank you Bradley and the entire team of @SU2C for all of your hard work and determination in order to make this event such an amazing success. I feel honored and blessed to have been included. I heard beautiful and touching stories that will resonate with me for time to come. We all have different reasons for standing up to cancer, and if we all stand united, we will win this fight for sure.#su2c