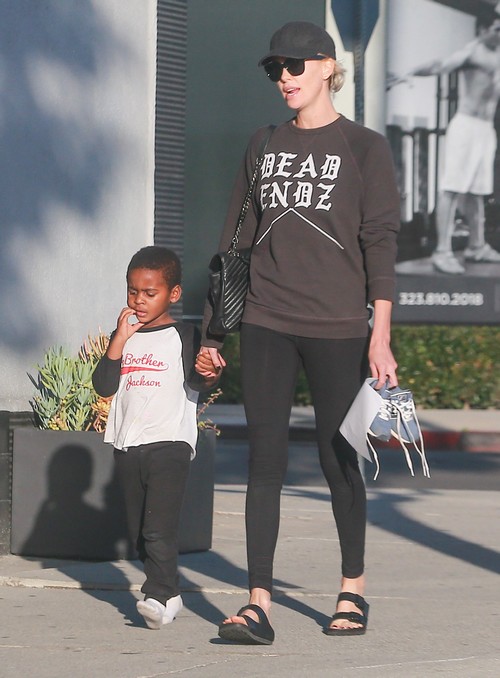 Charlize Theron proved that even an Academy Award-winning actress is no match for a four-year-old having a temper tantrum. But there is no evidence Charlize is a terrible and abusive mother for the way she handled son Jackson Theron’s public meltdown.

Maybe Jackson was cranky, tired or hungry or all three, when he caused a scene in a parking lot after dance class. Whatever was wrong, the youngster took it out on mom Charlize. And of course, everyone has to weigh in on how Theron handled the situation.

One eyewitness to the battle of wills between mother and son divulged to Star magazine, “Charlize was clearly frustrated, but she handled the situation as well as can be expected. [Charlize] just kept telling [Jackson] to straighten up and get in the car.”

In published photos it is clear that the 4-year-old boy, dressed in a white t-shirt, white shorts and white shoes, is not happy and had probably been crying.

Charlize is shown struggling to get adopted daughter August’s car seat – with the baby in it- into the car. At the same time Jackson decided to take off into the busy parking lot.

The mom of two was able to get August safely into the car and then wrangled Jackson, but not before the little guy put up a fight. A frustrated Charlize, who is a single parent by choice, had to grab Jackson by the wrists.

In the photo is does look like Charlize Theron dragged Jackson Theron into her black SUV, but an observer noted Charlize needed to quickly get her little boy out of the way of oncoming traffic.

An insider revealed that Jackson had been acting up in dance class and Charlize wasn’t going to let him get away with it. Jackson is well aware that there are consequences for his actions and most likely had privileges taken away for the dance class outburst.

Someone who witnessed Jackson’s meltdown and the way Charlize handled the situation felt bad for her. The bystander said it’s embarrassing for any parent to deal with a yelling, crying kid in public. But having to do so while being followed around by the paparazzi makes it even worse.

Is Charlize Theron an awful mom for disciplining her son Jackson Theron the way she did? Or would you have done the same thing?

Charlize Theron was spotted taking her son to music class in Hollywood, California on February 19, 2016. FameFlynet