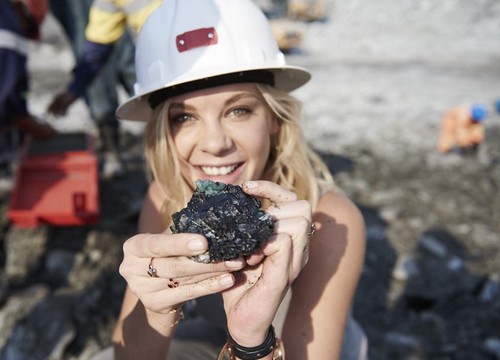 Has Chelsy Davy’s career change from attorney to jewelry designer prompted a marriage proposal from Prince Harry? Is Kate Middleton excited and ready to help Chelsy plan the next Royal wedding? Prince Harry and Davy dated from 2004 until 2011.

During the couple’s seven year relationship there was much speculation over whether Harry would ask for Chelsy’s hand in marriage. At the time the Zimbabwe-born beauty was focused studying law. The fifth-in-line to the throne was busy partying and snogging with other women.

HELLO! reports that Chelsy has snagged a gig designing jewelry for Baar & Bass and the former lawyer may be spending more time in London. The upscale boutique is located in the Chelsea area – which means Davy will be much closer to Prince Harry than when she lived and worked in Zimbabwe.

Baar & Bass isn’t revealing much about the new line of baubles created by Davy. “We’re holding our cards close to our chest as far as the look of the jewelry is concerned, but it absolutely stunning,” a spokesperson for the boutique revealed.

Has Chelsy been secretly engaged to Prince Harry for months? If Baar & Bass is holding its cards close to its chest, are Harry and Chelsy doing the same?

Is it possible that Kate Middleton is finally getting a sister-in-law she doesn’t fear? The Duchess of Cambridge and Prince William will celebrate their fifth wedding anniversary in April. It really is time for another Royal wedding, don’t you think?

Duchess Kate and Chelsy were as close to best friends as it gets. Maybe Princess Kate and Chelsy Davy have remained close and have been meeting in secret with Royal wedding planners. If a formal engagement comes soon it is entirely possible that Harry and Chelsy would marry in July.

Wouldn’t that be a coincidence! Prince Charles and Lady Diana Spencer announced their engagement in February 1981. The couple said their “I Do’s” In July 1981. Are Prince Harry and Davy planning on sharing their happy engagement news on the same day 35 years later? Will the couple marry on the exact day Prince Charles wed Princess Diana?

Royal watchers will need to wait and see if Prince Harry and Chelsy Davy have reignited their romance. It is entirely possible that Kate Middleton will finally have someone close in age who can serve as the Duchess of Cambridge’s confidante.

Exciting times ahead with @aya_africa #AYA