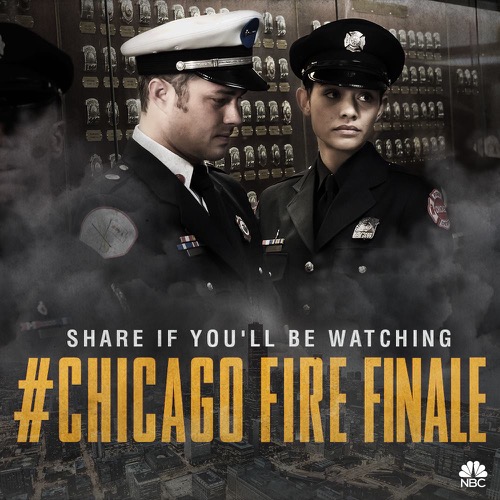 Tonight on NBC Chicago Fire returns with an all new Tuesday, May 17, season 4 finale called, “Superhero” and we have your weekly recap below. On tonight’s episode, in the Season 4 finale, Boden (Eamonn Walker) and Jimmy (Steven R. McQueen) are at odds; Kidd (Miranda Rae Mayo) deals with her unstable ex; Dawson (Monica Raymund) continues her quest to foster Louie

On the last episode, Dawson saved a young boy from an apartment fire; Kidd’s idea for Molly’s didn’t go as hoped; Severide hit a wall while advocating for new fire masked; and Cruz and Brett utilized a secret weapon to get Otis to see Dr. Halstead take a blood test. Did you watch the episode? If you missed it we have a full and detailed recap, right here for you.

On tonight’s episode as per the NBC synopsis, “the team responds to a building collapse that’s trapped more than a dozen people; Dawson’s quest to foster Louie is aided by a familiar face; Otis, who’s on medical leave, meets his temporary replacement; Severide and Kidd continue to see each other; and Casey is at odds with Antonio.”

Tonight’s season 4 finale looks like it is going to be great and you won’t want to miss it, so be sure to tune in for our live coverage of NBC’s Chicago Fire. While you’re waiting sound off in the comments down below what you think of this season of Chicago Fire so far!

Tonight’s episode of Chicago Fire kicks off at the fire house – everyone seems to be on edge. They appear to all be filling out some sort of paperwork that Boden gave to them. He tells them that he wants them by the end of the shift. Apparently, it’s an old tradition that fire fighters used to do after they lost someone in the company. Jimmy shows up at work – everyone is shocked to see him there.

Ms. Cantrell from Child Services stops by the firehouse. She wants to know Dawson’s living situation. Dawson reassures her that she is looking at an apartment after work and she will be ready for a home inspection by the end of the week. Cantrell tells her she can’t stall much longer – they need to get him in to a foster home, and there are other homes that are ready.

Jimmy and Sylvie are called to a fire that another fire house is working. There was an explosion inside, and some of the guys are suffering from smoke inhalation. One of the fire fighters are unconscious. Jimmy realizes that he isn’t dealing with smoke inhalation, the guy is having a heart attack. It’s a bit rocky at first, but Jimmy and Sylvie manage to revive him and get him loaded up in the ambulance.

Herman finds Dawson on her computer going through apartment listings. Herman offers her the apartment above her garage, but she says that she needs something that is ready to go. Casey overhears and invites Dawson to move back in with him. Dawson turns him down and rushes off to look at another apartment.

Kelly finds Stella in the garage texting her ex Grant – she says that he is still using and texting her crazy stuff. They flirt, and Stella invites Kelly to come over to her place after work.

Jimmy heads to the locker room to clean out his brother’s locker. He finds an old picture of them playing baseball when they were little and gets a bit emotional. Danny’s squad member Paul corners Jimmy. He blames Boden for Danny’s death. Paul rants that every one knew that building was collapsing and Boden had no business telling Danny that he had another minute inside. Paul tells Jimmy that he is always welcome to work at their fire house, if he doesn’t want to work with Boden any more.

Jimmy heads back to the fire house and visits Boden in his office. The two square off and Jimmy makes it very clear that he thinks Boden is responsible for his brother’s death. Boden kicks him out and calls Tehrbig and tells them they have a problem with Jimmy.

Dawson finds an apartment and she’s thrilled – she heads to Herman’s to celebrate with drinks. The real estate agent tracks Dawson down and has bad news, apparently she can’t have the apartment after all. Dawson has no choice but to move in to Herman’s apartment…and it’s a total mess, the door doesn’t even work. Herman calls in the squad to help them fix the apartment up, they only have 4 hours until Cantrell arrives for the home visit.

The home inspector shows up with Cantrell – it doesn’t go well, the window won’t open, the water in the sink doesn’t work, and there is still wet paint on the wall. Dawson cries and tries to explain to Cantrell and the inspector that she was in a bind and her other apartment fell through at the last minute.

Boden corners Jimmy, he says that he spoke to Tyberg and they want to let Jimmy take on Danny’s badge number. Jimmy doesn’t seem too impressed with the peace offering. Boden tells Jimmy that he made a choice to let his brother go back in the building because he thought there was another person in there that needed his help. Then, he points out to Jimmy that he also made a choice to go back inside and save Jimmy before the building collapsed.

Stella’s ex Grant is out of control and behaving more and more erratically. He calls Stella and is incoherent. She uses an app to track his phone and finds out that he is at the park. She rushes there with the crew and they find Grant, passed out on the sidewalk – he overdosed. Sylvie and Jimmy rush to get Grant on a stretcher. They administer Narcan and are able to revive him.

Grant wakes up in the hospital a few hours later and Stella is sitting there with him – she tells him that he overdosed and he needs help. Grant cries that he doesn’t need to get clean, he just needs her. Stella tells Grant she doesn’t want to hear anymore of his excuses, he screams at her to get the hell out of his hospital room. Dr. Charles tells Stella that she did the right thing bringing him in, and they “will do their thing” with Grant from here.

Meanwhile, Casey is schmoozing in Springfield at a Summit with Susan. He spends all day drinking and brownnosing local politicians. He calls to check in on the fire house with Boden. Later that night, Susan and Casey sit down together – she wants him to run for Senate, there is a seat opening up. He kind of dodges the question and says that the future is uncertain right now.

A call comes in at the fire house in the wee hours of the morning – there’s a structure fire. They all jump off their cots and rush to the apartment building. Herman takes the lead, they split up in groups to try and get everyone out f the building and make sure the floors are cleared.

Boden radios them and tells them he wants everyone out of the building now – there was an explosion on the floor and the fire is spreading too quickly. Dawson and Stella are trapped on a floor. They break a window and there’s a rope dropped for them – Dawson tells Stella to go first. Stella reluctantly leaves Dawson and heads down the rope. There’s another explosion and the rope is burnt and lost before Dawson’s turn to be rescued comes.

Dawson manages to get out the window just in time, and is hanging on to the ledge several stories up in the air for dear life. They manage to get a ladder up to her and Kelly rushes up to rescue her – she’s going to be okay.

They all head back to the fire house – and Dawson is having a hard time. She contemplates calling Casey, but Cantrell arrives with Louie. Apparently she passed the home inspection test after all. Canterll hands over Louie and tells Dawson that she is going to be a great mom.

Danny’s wife Stacey comes to pick up his stuff from Jimmy. She cries and asks him if the rumors are true and Boden made a bad call that cost Danny’s life. Jimmy reassures her that they are just rumors, and Danny died a rumor.

Dawson takes Louie home to get him settled in to their new house. She sits down to finally do the assignment that Boden gave them at the beginning of the episode – she’s writing a letter to Louie in case anything ever happens to her while she is on call.

Meanwhile in Springfield, Stacy and Casey are having drinks at the bar still, she cases Casey and gives him a napkin with her hotel room number on it and heads upstairs. Casey doesn’t go though, he heads back home to Chicago and shows up on Dawson’s doorstep in the middle of the night to meet Louie.

After Danny’s funeral – Stella and Kelly head back to her place. Little does Stella know, Grant left the hospital and he is sitting in the dark in her apartment with a butcher knife.