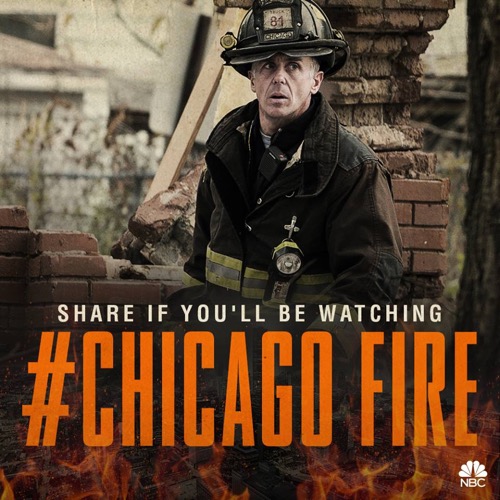 Tonight on NBC Chicago Fire returns with an all new Tuesday, January 19, season 4 episode 11 called, “The Path of Destruction” and we have your weekly recap below. On tonight’s episode, a tornado threatens the city of Chicago; Chili makes a major mistake, which causes Brett (Kara Killmer) to report her to Boden. (Eamonn Walker)

On the last episode, Squad members gathered at Chicago Med after one of their own was attacked; Cruz worked with the Chicago P.D. to find Freddie, who’s missing; Choi and Halstead worked on an attempted-suicide victim; Mouch surprises Trudy; and Brett and Jimmy worried about Chili, who’s acting oddly. Did you watch the episode? If you missed it we have a full and detailed recap, right here for you.

On tonight’s episode as per the NBC synopsis, “a tornado threatens the city of Chicago; Chili makes a major mistake, which causes Brett to report her to Boden; Otis asks Dawson to help him solve his women troubles; and Severide assists a Department of Homeland Security agent.”

Tonight’s season 4 episode 11 looks like it is going to be great and you won’t want to miss it and neither do I, so be sure to tune in for our live coverage of NBC’s Chicago Fire right here for your enjoyment. While you’re waiting for the recap to begin, sound off in the comments section down below and let us know what you think of this awesome eleventh season of Chicago Fire so far! Are you enjoying it as much as I am?

Tonight’s episode of Chicago Fire kicks off with Herm’s wife Sandy dropping him off at the fire house. His wife thinks that he is going back to work too soon after the stabbing – Wallace said he could take off all the time he wanted. Herm won’t listen – he want’s to start feeling like himself again.

Herm heads in to the fire house and is greeted by Wallace, Dawson, and the rest of the team. They even made a “Welcome Back” banner for him. Cruz takes Herm aside and apologizes again for bringing Freddy around. Cruz reassures Herm that he is going to see to it that Freddy gets the max sentence.

Wallace takes Casey and Severide in to his office and warns them that Chicago is about to be on tornado watch – there is a big storm coming. In the locker room Chili and Borelli have an awkward run-in. He wants them to still be friends after he dumped her. Chili snarks that she is not going to be friends with him just so he doesn’t have to feel guilty about dumping her.

The tornado watch is upgraded to a warning – everyone in the fire house and gathers around the TV to watch the news. A town just 30 minutes away from them was completely leveled by the tornado and now it is headed straight towards Chicago. Herm calls his wife at home and tells her to pack a bag of snacks and take the kids down to the basement.

Meanwhile, Otis doesn’t seem too worried about the tornado. He heads to the other room to lift weights. Dawson corners him and asks him what he is up to – Otis is a little upset that Brett is still dating Austin. Dawson promises to give him some pointers on how to win over a girl.

A call comes over the loudspeaker and Brett and Chili head out on the call in the ambulance. The streets look completely deserted because of the tornado warning. They arrive at an empty restaurant – in the kitchen one of the people that took shelter in the back room are having what appears to be a seizure. Chili grabs a syringe out of the bag and injects the woman – but she doesn’t stop seizing, instead she stops breathing. Brett takes the needle from Chili and realizes that she gave the woman the wrong bottle of medicine – she just injected her with morphine.

Chili zones out and stares off in to space – Brett ignores her and grabs the correct bottle and manages to save the woman. As they are leaving with the patient, Brett demands to know what happened. Chili says it was no big deal, everything turned out fine and the woman lived.

Back in the locker room at the fire house Dawson is trying to convince Otis to shave off his mustache. She argues that he’s in a rut, and he needs to make a big change. She hands his the razor and heads out to the break room. Everyone is chilling out and playing poker – but Herman is stressing over the tornado.

A call comes in – the tornado has touched down in their district, in the West Lawn neighborhood. Herman overhears the call and is shaken up, that’s where his wife and kids are. A structure damage call comes in and they all rush to the scene in the firetruck. When they arrive, there are trees everywhere and houses are leveled by the storm.

Wallace orders his men to spread out and start searching the rubble for survivors. Mouch finds a dead man lying on the ground with a sign stuck through him. Chili checks his pulse – but he is gone. Meanwhile, Casey finds a panicked teen boy – he says that his pregnant mother is inside one of the houses. The boy turns around and Casey sees a huge piece of glass sticking out of his back, the boy’s adrenaline is pumping so hard he doesn’t even feel it. Casey calls for a medic for him.

They learn that the boy’s name is Lucas – Chili and Brett get to work on his wound. Meanwhile, Severide and his team get to work moving a boat and getting people out of the basement of an apartment. Lucas is frantic because his parents wren’t in the basement.

Casey takes Herm up to check out the second floor apartment – but the building is on fire and is about to collapse. They find Lucas’s parents hiding in a closet. His father is able to crawl out but his mother is unconscious. They very carefully carry the pregnant woman down the ladder. Lucas’s mom comes to and she climbs on to the stretcher with her son.

After they get the mess cleaned up, Casey notices Herman is on his phone. He has been calling his wife non-stop but she hasn’t answered the phone. They mount up in the truck and stop by Herm’s house – his wife rushes out to greet them, they are all fine. She just lost her phone in the toilet and that is why she wasn’t answering the phone. As they head back to the fire house the city lifts the tornado warning – the storm is gone.

At the fire house, Otis talks to Brett – she reveals that she told Austin that she just wants to be friends. And, Austin didn’t take the news well, he has been calling her phone over and over. In the breakroom Sevreid tries to talk to Cruz – he’s upset and still blames himself for Herm getting stabbed.

A woman arrives at the fire house and introduces herself as Alex Ward, she works for Homeland Security – apparently they were investigating one of the houses that was damaged in the tornado, the residents were thought to possibly be terrorists. Severid agrees to go with her to the house to check for structural damage – and so she can snoop around without a warrant.
Brett is worried about Chili, not only did she nearly kill a woman – but she seems to think it wasn’t that big of a deal. Brett tries to talk to her, but Chili doesn’t want to hear it, she is making plans to go to the bar.

Severeid and Alex Ward arrive at the suspicious house – he kicks the door in for her and they head inside to snoop around. They find a hidden room full of supplies to make a bomb.

Casey stops by the hospital to check on Lucas – he learns that the boy and his mother are fine, but his father passes away unexpectedly because he had a head injury.

Cruz stops by the prison to visit Freddy – he is livid that he vouched for Freddy and took him in, and he stabbed his friend. Freddy reassures Cruz that it is not his fault, he apologizes to Cruz for everything. They stare at each other for a tense moment and then Freddy leaves the visitor’s glass.

Tonight’s episode ends at the bar, as always, everyone is gathered around watching Otis shave his mustache and cheering him on. Meanwhile, Brett is at the fire house with Wallace – she rats out her partner Chili and tells him what happened on their call with the syringe.