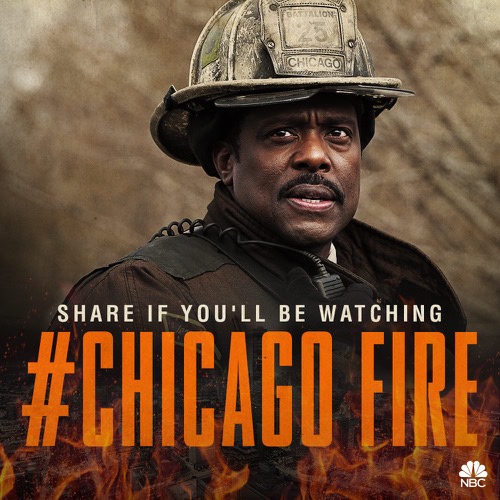 Tonight on NBC Chicago Fire returns with an all new Tuesday, January 26, season 4 episode 12 called, “Not Everyone Makes It” and we have your weekly recap below. On tonight’s episode, Freddie’s  (Ralph Rodriguez) father begs Herrmann (David Eigenberg) to forgive his son’s assault; Casey (Jesse Spencer)  discovers that a makeshift shelter housing people displaced by the tornado may close.

On the last episode, a tornado threatened Chicago; Chili makes a major mistake, which caused Brett to reported her to Boden; Otis asks Dawson to help him solve his women troubles; and Severide assisted a Department of Homeland Security agent. Did you watch the episode? If you missed it we have a full and detailed recap, right here for you.

On tonight’s episode as per the NBC synopsis, “Freddie’s father begs Herrmann to forgive his son’s assault; Casey discovers that a makeshift shelter housing people displaced by the tornado may close; Casey attends a fund-raiser at the request of an alderman; and Dawson and Brett experience repercussions after telling Boden about Chili’s erratic behavior.”

Tonight’s season 4 episode 12 looks like it is going to be great and you won’t want to miss it, so be sure to tune in for our live coverage of NBC’s Chicago Fire. While you’re waiting sound off in the comments down below what you think of this season of Chicago Fire so far!

Freddie’s trial began on tonight’s all new episode of “Chicago Fire”. Apparently his assault with a deadly weapon on a city official had pushed the State’s Attorney into trying the case personally, but Herrmann had actually approved of the idea. He said that Freddie was getting his just deserts. And he continued to think so even as he saw him in court during the first part of his testimony.

However, Herrmann later got a call from Freddie’s father. The older man was in jail himself for murder and yet he wanted to talk Herrmann into changing his mind about Freddie. And he had in fact reached out to Herrmann from father to father in order to convince Herrmann into forgiving Freddie’s for his mistakes.

And admittedly that had gotten to Herrmann. He had wondered afterwards if Freddie might deserve another chance. But Cruz told him not to go there. Cruz you see hadn’t trusted Freddie’s father because had remembered the other man from the neighborhood and he recalled the time Freddie’s father had once stabbed someone for merely looking at him funny.

So Cruz told Herrmann to report the phone call. He said that it might have been a threat in disguise and that the older man could have possibly tried to frighten Herrmann from continuing with his testimony at trial.

Yet Herrmann didn’t want to think along the same terms. Therefore, he went down to the prison and he visited Freddie’s father. And he heard from the man, himself, where he was coming from with his plea for forgiveness.

And it was an unfortunate tale. The other man had been involved in gang life and he had grown up with this mentality of believing he had to act tough and never face an insult without striking back. And this is what he taught Freddie. So Freddie had always believed that he couldn’t allow anyone to insult him because it would make him look weak and, though Herrmann had only been joking with him when he came up with a silly nickname, the young man had only done exactly what his father taught him. Which was to cut someone down.

But Freddie’s father didn’t just leave things there. He had also told Herrmann that he had spoken with his son and that the one thing Freddie never would have wanted to do was hurt someone that had put their trust in him. And so Freddie did regret the night he stabbed Herrmann.

And Herrmann had to decide what to do with that.

Forgiveness was naturally going to be the tougher choice but it was like Herrmann couldn’t escape thinking about it. House 51 later got a call to a residential. And the couple that had called 911 did so because their son had locked himself in his bedroom and was threatening suicide.

So the guys had to eventually break through the door. And once they did, they found the son hanging from his ceiling fan. He had apparently been bullied at school and when he found out he couldn’t even escape it because the bullies had begun targeting him online – he thought suicide was the better option.

But suicide is never the better option and so Herrmann and the EMTs had to resuscitate him in order for him to figure that out on his own.

And after seeing someone nearly lose their son, Herrmann had then spent time with his own. Just because!

And in the end he chose to forgive Freddie. So he asked for a meeting with the judge on the case and changed his testimony because before he had stated that Freddie deserved whatever they throw at him. Though he told the judge that he realized recently that he was speaking from a place of hurt and that he had forgiven Freddie because it was what was best for the both of them.

However, back at the station, Chili had worn out the other’s sympathy. Dawson and Brett had reported her sloppy work on the job and that had resulted in her second strike with Boden. Boden had said that if she messed up one more time that he would not only see that she never worked with 51 again but that she wouldn’t be able to find work in the city.

And so both Brett and Dawson had tried to take Chili in hand. They told her that they sympathize with her situation and that they knew losing a sibling was hard. But at the same time they also had to tell that she was self-destructing.

She was risking patients’ lives while she was on the job and pushing all of her friends away. So first the ladies tried to be gentle with her and when they could see that it wasn’t working – they tried the tough approach. And for a moment it had looked like it was working.

Chili had talked about her sister and had even explained the falling out that they had. And how it never used to be like that because once they were each other’s best friends. Yet not long after she opened herself up – Chili was back at the bar and drinking to oblivion.

Though, she’s not the only person to find themselves in trouble. Casey it seems had also stepped one a few toes after he accused an Alderman of stealing money from a shelter. The same shelter that Lucas Hicks and his mother was sent to after the tornado.

Casey had apparently ended up befriended the family and so he had taken a special interest in the shelter they were in. And that’s why he went on to speak at event to which was supposed to raise enough money to keep the shelter open. But then he heard that the shelter was going to close anyways in spite of the money that was raised and the excuse that he had been given just hadn’t made sense.

The Alderman’s people had said that it was too expensive to keep the shelter open and the reason that was odd was because the “Shelter” had been an abandoned gym with cots. And surely that couldn’t be too expensive to maintain. So Casey had found himself face to face with Alderman and he had demanded to know where the money really went.

And though it supposed to be secret, Severide has gotten involved with the woman from Homeland Security. Alex Ward has been taking him on fact finding missions and then never explaining what they were doing but she risked that on tonight’s episode when she told Severide that she had been sent to Chicago to trace the person making homemade napalm.