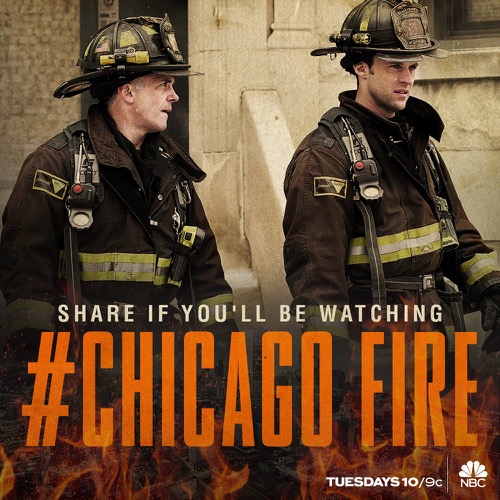 Tonight on NBC Chicago Fire returns with an all new Tuesday, February 16, season 4 episode 15 called, “Bad for the Soul” and we have your weekly recap below. On tonight’s episode, the team responds to a suspicious call from a neighbouring firehouse; and welcomes a new firefighter, though her addition has repercussions.

On the last episode, Severide confronted Chili about her erratic behavior; members of the firehouse rally around Casey, who they thought would make a great candidate for alderman; and Jimmy squared off against Antonio in the first annual “Battle of the Badges” boxing match. Did you watch the episode? If you missed it we have a full and detailed recap, right here for you.

On tonight’s episode as per the NBC synopsis, “the team responds to a suspicious call from a neighboring firehouse; and welcomes a new firefighter, though her addition has repercussions. In other events, Casey moves forward in his run for alderman.”

Tonight’s season 4 episode 15 looks like it is going to be great and you won’t want to miss it, so be sure to tune in for our live coverage of NBC’s Chicago Fire. While you’re waiting sound off in the comments down below what you think of this season of Chicago Fire so far!

Its official! Matthew Casey is running for Alderman and he’s going to need more support than ever on tonight’s episode of “Chicago Fire”.

Yet, what Casey didn’t need was for people to try and buy him. His new friend Tamara Jones had thrown him his first rally and they had been excited about announcing his run for alderman, but afterwards there had just been this one guy who had wanted to ask impertinent questions. And this man wanted to know what Casey was going to do in order to get the community leaders on his side because apparently Casey couldn’t win without them.

And, well, that sounded threatening. As if he as well as the community leaders were going to be making demands from Casey or that the man speaking to Casey was warning him away from selling his vote. But the entire conversation had a way of putting both Casey and Dawson on edge.

Dawson had later asked Tamara if she recognized that guy and Tamara claimed she hadn’t. She said all she did was put out the word and that literally anyone had been welcomed to come. Which, you know, could be true but all the same Dawson did start taking more of an active role in Casey’s campaign.

She had asked the guys back at the firehouse to help out with Casey’s campaign and Herrmann proven himself as someone perfectly willing to break the law to get his buddy some votes. First, he thought about bribery and was going to use Molly’s as a way to get people to pledge their support for Casey. And, after he found out that was illegal, he then came up with another illegal idea.

But the team were soon called out to another firehouse so that at least stopped Herrmann from any breaking any laws.

It was revealed that Firehouse 21 had needed assistance with a man down. Apparently they had been running drills and one guy had been up on the ladder when suddenly he just fell. And happened to fall on parts of the truck.

So Firehouse 51 had offered their help and they had gotten their fellow firefighter into an ambulance. Yet there seemed to be questions about how the accident occurred. The one man that claimed to have witness everything had told Severide that McCormick had taken misstep when he tried to get on the roof but then that same man changed his story when he was talking to Cruz.

And therefore Cruz had wanted some answers. However, Severide had told him that he was simply being paranoid because he had known Richter since their academy days together. Plus there was no motive for why Richter would want to hurt one of his own men.

But the newbie was able to help the guys out in determine a motive. Rodney Ogle was the world’s most annoying EMT and unfortunately he had been assigned to temporarily feel out Chili’s vacant spot. So he was driving Brett crazy though he was also able to help Severide and Cruz.

Ogle had been with 21 for the last while and he knew that Richter and McCormick had been each other day and night because McCormick was dating Richter’s ex-wife. So Richter could and would hurt someone because of that. And that’s why Casey had written up a report stating that Richter had made conflicting reports to both Cruz and himself.

Yet, Richter’s ex-wife had later begged Severide to change his story seeing as it was report that was allegedly going to ruin everything.

And so the firehouse had gotten caught up in a Firehouse vs. Firehouse tiff. Although there were going to be a few other changes at the Firehouse. Jimmy you see had been pulled from Firehouse 51 because there had been another fighter with more seniority that needed to be placed.

So Chief Boden had to let Jimmy go, but he did make it up to the young man afterwards. Because while Jimmy can’t ride in the truck anymore, he could take the house’s open position as the newest EMT. And that had suited Jimmy just fine.

He was willing to take on whatever job the Chief offered as long as he got to stay at the Firehouse. And as it turns out he ended up liking his replacement. Stella Kidd had known Dawson from their training days and she had certainly managed to make friends out of everyone else on her first day at 51.

Though it does appear that she shares a secret with Severide. And speaking of Severide, he and technically Cruz had been right about Richter. Richter hadn’t pushed the other firefighter off the ladder but he had tried to hide the fact that he had been on the ladder at the same as the other guy. Which he later admits was wrong of him to do so.

But he knew how it would look so he tried to hide it and that ended up hurting the other man more than anything else.

Richter had seen his fellow firefighter fall for no good reason and he had kept that to himself. Yet Severide realized that McCormick must have had a preexisting condition. And so he was able to warn McCormick’s doctors in time because it turns out the man needed immediate surgery.

So Richter had made things right in the end and his sole punishment had been a month suspension. And as for Casey, he managed not to sell himself in order to win a few votes. But the gang leaders as well as the white collar criminals looking for a kickback in construction didn’t seem to want to be his friend anymore.