BY Amanda Austin on May 3, 2016 | Comments: one comment
Related : Recap, Television, TV 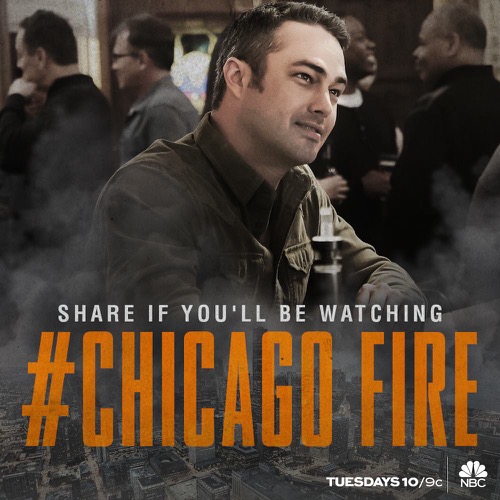 Tonight on NBC Chicago Fire returns with an all new Tuesday, May 3, season 4 episode 21 called, “Kind of a Crazy Idea” and we have your weekly recap below. On tonight’s episode, Dawson (Monica Raymund) saves a young boy from an apartment fire; Kidd’s (Miranda Rae Mayo) idea for Molly’s doesn’t go as hoped.

On the last episode, Severide watched Holloway’s young son while she testified in court; the squad responded to a fire at an art gallery; Casey receives a suspicious package in the mail. Did you watch the episode? If you missed it we have a full and detailed recap, right here for you.

On tonight’s episode as per the NBC synopsis, “Dawson saves a young boy from an apartment fire; Kidd’s idea for Molly’s doesn’t go as hoped; Severide hits a wall while advocating for new fire masks; and Cruz and Brett utilize a secret weapon to get Otis to see Dr. Halstead take a blood test.”

Tonight’s season 4 episode 21 looks like it is going to be great and you won’t want to miss it, so be sure to tune in for our live coverage of NBC’s Chicago Fire. While you’re waiting sound off in the comments down below what you think of this season of Chicago Fire so far!

Tonight’s episode of Chicago Fire kicks off with Dawson and Casey in bed together. After their morning romp, Dawson wants him to go get pancakes with her like he used to. Casey has to bail though – he has a meeting, he is trying to get a youth center approved.

Later at the fire house a call comes in for a structure fire – they arrive at the apartment building and Boden tells them to start clearing the floors before the ceilings cave in. Herman and Dawson find a woman passed out in one of the buildings, but there is hardly any smoke, it can’t be smoke inhalation. They find a needle still in her arm – she overdosed.

Herman carries the woman out. Dawson is about to leave when she finds a toddler hiding under the table. She tries to coax him out as the building starts caving in. Herman gets the woman outside and they load her on a stretcher. Dawson manages to get the little boy out in the knick of time. She carries him in to the back of Sylvie’s ambulance but the little boy won’t let go of her, so she rides with him to the hospital.

Back in the break room – Stella is taking her bar management very seriously and has been trying to convince Herman to get an Artisan ice machine. Cruz corners Otis, Will told him about the blood tests that he never got done. Will is concerned about the huge bruises that Otis had on his back. Otis laughs it off and says that he doesn’t need to get blood work done because the bruises went away, he says it’s not that serious.

At the hospital, Dawson learns that the woman that overdosed was not even his mother – she was a foster mother. Cantree from Child Protective Services arrives. She says that they were investigating her anyway and were planning on moving the little boy Louis. Dawson is upset, but she lets Cantrell take Louis away – she says he is going to a group home.

After the fire, Severeid corners Boden. He says that they need thermal imaging masks – Severeid and Otis nearly died trying to save a life-size Star Wars toy. If they had the masks, they would have known it wasn’t a person. Boden tells Severeid that Chief Barr won’t order them, because they are already over budget. Severeid pays Chief Barr a visit and they argue, but Barr stands by his decision and says that there is not enough money.

Dawson gets back to the fire house. She tells them about Louis going to the group home. Dawson feels bad because Louis kept asking for a blanket that was left back at the fire. Dawson goes back to the burnt apartment building and finds the blanket – she drops it off with Cantrell at her office. Cantrell says that Louis doesn’t have any family, but they are trying hard to find him a new foster family.

Cruz is not convinced that Otis is okay – he wants him to get the tests done. So, he calls Baba and has her come down to the fire station to talk some sense in to Otis. After she is done yelling at him, Otis is not a happy camper, but he says he will go to the hospital after his shift and get the blood work done.

A call comes in for an ambulance – Sylvie rushes to the scene. A kids meets them outside of the house and says that his friend Damon is really messed up and acting like he has rabies. They rush inside and find him lying on the floor and foaming at the mouth and gasping for air. Damon’s friends confess that they dared Damon to drink a whole bottle of soy sauce. Sylvie says that he is having a sodium overdose.

Sylvie heads back to the fire house, she is upset because she don’t think Damon will make it – he was in a coma by the time they got him to the hospital. She tells Cruz they did the right thing by calling Baba, Damon’s friends waited too long to call for help and it probably cost him his life.

Otis finally goes in for the blood work and Cruz and Sylvie tag along. Will tells Otis that he doesn’t have Leukymia. But, he does have a blood platelet disorder and his blood isn’t clotting properly. He is lucky he didn’t get hurt and bleed to death, and he needs to start treatment ASAP before there is bleeding on his brain. Otis is devastated when Will tells him he can’t go back to work until they get the platelets under control.

Casey gets home from the youth center meeting late, and Dawson is waiting up for him. She wants them to take Louie in as a foster child. She can’t get him out of her mind, and he doesn’t have any family. Dawson tells Casey that she thinks it is fate. Casey agrees that Louis deserves a family, but they barely have time for each other and both their schedules are crazy – there is no way they could take care of Louie. Dawson is obviously upset, she makes up an excuse to leave and says that she has to clean her apartment and rushes out.

The next day Dawson heads to work and has a heart to heart with Casey. She says that she gets that it is not the right time in Casey’s life to take in a child. But, it is the right time for her. Dawson announces that she is going to take care of Louis by herself and she already has a meeting with Cantrell to apply to be a foster parent.

There is a call over loudspeaker for a fire…Herman recognizes the address, it’s at his bar Molly’s. They rush to the scene and are able to put the fire out before it spreads through the whole bar. It was an electrical fire – started by the Artisan ice maker that Stella convinced Herman to get.

Back at the fire house they get good news. Casey used his Alderman position to pull some strings and get the money for the fire house to get the thermal head gear that Severeid wanted. Boden thanks him for what he did, apparently politics is his calling after all.

In the locker room, Dawson corners Herman and asks him if he thinks she will make a good him. He says he doesn’t think so, he KNOWS she will be a good mother. Cruz stops by Otis’s house to check on him and finds him throwing out all of his junk food. Cruz is proud of him and tells him that they are “going to beat this thing together.”

Dawson meets with Cantrell, she is upset when she learns that it can take over a month for her to get approved to be a foster parent. Cantrell says by then they will have put Louie in a nother home, they can’t just keep him at the group home until Dawson is approved. Dawson is upset – but Cantrell lets her visit with Louie and they read a book together.

Tonight’s episode ends with Stella trying to fix the wall that was ruined at Molly’s by her fancy ice machine. Severeid shows up and offers to help her – she is clearly struggling. They wind up hooking up instead.