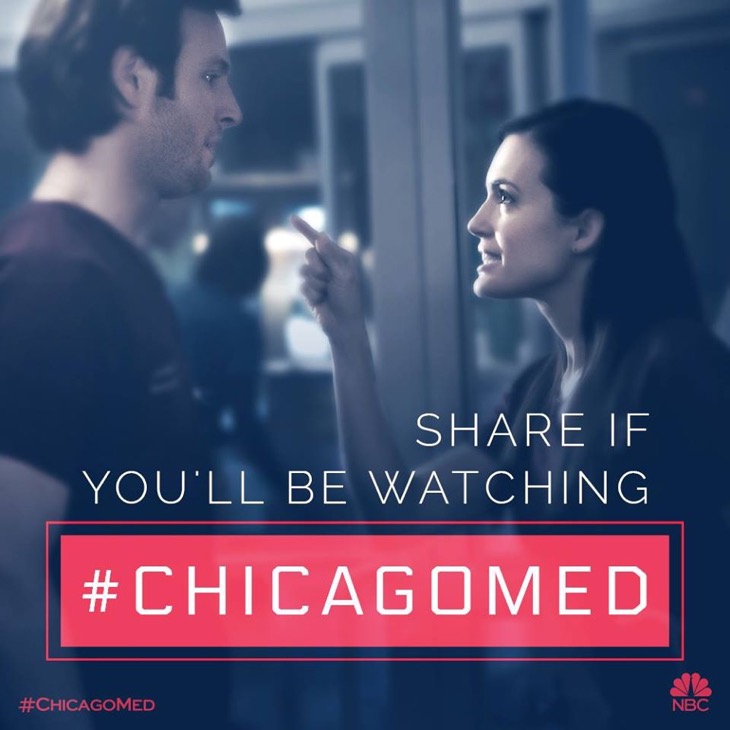 Tonight on NBC their new medical drama Chicago Med returns with an all new Tuesday February 16, season 1 episode 10 called, “Clarity,” and we have your recap below. On tonight’s episode a 9/11 hero is treated, but an unforeseen medical problem arises. Meanwhile, Sarah (Rachel DiPillo) contemplates which hospital to select for her residency.

On the last episode, Dr. Halstead jeopardized his career when he goes against a family’s order regarding a terminally ill cancer patient. Meanwhile, April and Dr. Reese treated a homeless man, and Choi’s personal issued emerge while caring for a bipolar patient. Did you watch the last episode? If you missed it, we have a full and detailed recap right here for you.

On tonight’s episode as per the NBC synopsis, “a 9/11 hero is treated, but an unforeseen medical problem arises. Meanwhile, Sarah contemplates which hospital to select for her residency; Dr. Choi cares for an injured teen hockey player with a demanding father; and Halstead and Manning clash.”

Tonight’s season 1 episode 10 is going to be exciting. We’ll be blogging it right here for you. In the meantime hit up the comments section and tell us your thoughts on  Chicago Med so far and what you expect to happen next. Enjoy a sneak peek of tonight’s episode below for your enjoyment!

Tonight’s episode of Chicago Med kicks off with Ethan’s girlfriend trying to surprise him in the shower – but he’s obviously distracted, and not in the mood to fool around. He tells her that he will see her at the dinner later that night and rushes off to get dressed.

Meanwhile, Hallstead is in Goodwin’s office getting screamed at over the Jennifer Baker lawsuit. Goodwin warns him that his future at the hospital is on the line, he needs to stick to the script and be the perfect doctor until they get the lawsuit settled.

A 17 year old hockey player named Bret Cooper is rushed in to the emergency room. He’s dazed and confused and doesn’t know where he is – his dad Jack came running in with him, he insists that nothing happened to Bret and he barely fell. Bret’s mom arrives and says that Bret just had a concussion last month. His dad is trying to cover it up because he wants his son to be able to go to college and play hockey – he just got a scholarship. All of a sudden Bret starts screaming that he can’t see and Dr. Choi ushers his parents out of the room.

The “Gift Of Hope” truck arrives with a set of lungs for a transplant – April rushes to wake up Rhodes where he is taking a nap and tells him it is time for the transplant. Meanwhile, Will runs in to Zoey in the waiting room, she giggles about how much fun she had with him the night before.

Will heads in to check on his next patient – Mr. Anderson is a diabetic and has congestive heart failure – he came in because he was experiencing shortness of breath. Will orders an angiogram and says that the blood vessels in his legs are shot. Natalie checks in because she apparently knows Mr. Anderson, she and Will get in to an argument in the waiting room because she thinks

Will is going overboard and Mr. Anderson is fine to go home. He tells her to butt out it – it’s his call.

In Bret Cooper’s room – his dad is going over game plays on his tablet with him. Dr. Choi arrives and tells them that all of the tests came back clear and Cooper doesn’t have a concussion. Bret’s mom isn’t satisfied, she wants them to do more tests on him, she doesn’t think that he is okay. Reese wants to test Bret for meningitis – suddenly Bret says that he is dizzy and he passes out and knocks Reese down with him. Dr. Choi calls for help.

Once they get Bret and Sarah picked up – Dr. Charles comes down to check in on Choi. Apparently he is a hockey fan and he knows Bret and his father. Dr. Choi wants Charles to talk to Bret’s dad – he has been acting strangely and twitching, stuttering, and experiencing memory loss while he was at the hospital.

Connor is helping Dr. Downey prepare for the lung transplant. Of course, Dr. Downey isn’t being easy to work with.

Tim Anderson’s tests come back and they are all negative. Natalie laughs that she knew Will was wrong. She orders the nurse to get Anderson on blood thinners and Vitamin K – she grumbles that Will put Tim through all of that stress for nothing.

Dr. Downey and Connor are preparing to start the transplant – but they have a problem, they notice that one of the valves in the patient’s heart is collapsing. They need to get a heart stint in him before the lung transplant. But, the new lungs have to be transplanted within 6 hours, or else they will be no good. Dr. Downey and Connor need to come up with a new game plan ASAP.

There’s a code blue – Tim Anderson was talking to one of the nurses and suddenly keeled over. Will and Natalie rush in to try and revive Anderson – they use the defibilator and perform CPR, but Anderson doesn’t have a pulse. Natalie calls time of death but Will won’t stop performing CPR. Finally she snaps at Will, “He’s gone” and Will storms out.

Dr. Choi has bad news for the Cooper family – Bret has a brain infection called cerebritis, and it is being caused by an underlying condition that they have yet to find. Bret’s dad thinks that he just needs some antibiotics and he can be back on his feet in no time. Dr. Choi takes Bret’s dad out in to the hallway – he tells him that he can tell he has the brain disease called CTE, from too many concussions. It’s a progressive disease and will only get worse. Dr. Choi and Cooper wind up in a screaming match in the hallway, Dr. Charles comes and breaks them up. He scolds Dr. Choi and tells him that this is why they are supposed to be having therapy sessions.

Will looks at Tim Anderson’s files and realizes that Natalie had Vitamin K administered to the patient – Will freaks out and takes Natalie aside. He shouts at her and says that she could have just killed Tim Anderson. Will snaps at Natalie, if she hadn’t interfered – Tim Anderson would still be here. Natalie screams back that this isn’t about Tim, it’s about Will recesitating Jennifer Baker.

Will sits in on the autopsy of Tim Anderson – he learns that he had a pulmonary aneurism. The doctor conducting the autopsy says that Tim didn’t stand a chance – there was nothing that anyone could have done to save him. And, the Vitamin K definitely didn’t kill him, Will realizes that he was wrong and Natalie is not to blame.

After running some tests Dr. Choi returns to Bret Cooper’s room and tells his parents to take a seat. Bret has a disease called HHT, and that means that he has enlarged blood vessels all over his body that get infected by bacteria easily. Dr. Choi advises Bret that he should quit hockey – if one of his enlarged blood vessels take the wrong hit – he could die instantly. Obviously Bret’s dad is furious, he storms out and says that he is getting a second medical opinion.

Will feels terrible about cursing out Natalie – he vents to Zoey. Zoey tells Will that he should apologize to Natalie and she is sure that she will understand. They agree to take a raincheck for dinner and go out another night.

Meanwhile, Connor and Downey have decided to do the valve stint and the lung transplant at the same time. It’s dangerous and risky – and Connor and Downey are not getting along well. They have a serious mishap and the patient nearly bleeds out. Downey begins acting strangely and tells Connor that he needs to take the lead on the surgery. They finish up and complete the surgery successfully.

Will finds Natalie in the break room getting ready to leave – he apologizes to her for yelling and says that he knows Tim’s death wasn’t her fault. Natalie shouts at Will that she doesn’t understand why he always treats her so badly and is always pushing her away. Will leans in and kisses Natalie and says “Don’t you know.” Natalie is shocked – Will turns and leaves her there, obviously confused.

Connor meets up with Sam after work for drinks, they have been at odds all day. Sam is not happy about him working with Downey. He tells Sam that if he has to choose between her and Downey – he is going to have to choose Downey.