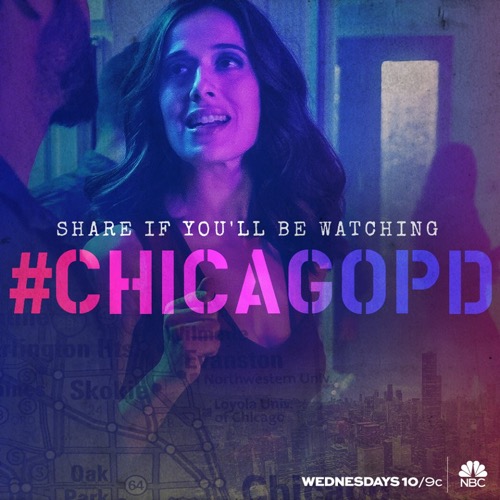 Tonight on NBC their riveting police drama Chicago PD continues with an all new Wednesday January 13, season 3 episode 11 called, “Knocked the Family Right Out” and we have your weekly recap below. On tonight’s episode, a burglary-sexual assault at a luxury condo is investigated; and Lindsay, (Sophia Bush) Halstead, (Jesse Lee Soffer) Atwater (LaRoyce Hawkins) and Ruzek (Patrick John Flueger) go undercover in an attempt to catch the perpetrators.

On the last episode, a doctor with personal connections to Voight (Jason Beghe) was under investigation when four of his patients were committed to Chicago Med after an overdose of chemo. The doctor denies Lindsey (Sophia Bush) and Halstead (Jesse Lee Sofer) accessed to his files, but after obtaining a warrant the team was able to track down his patients and discover all of them have been poisoned with unnecessary chemo. Meanwhile, Burgess (Marina Squerciati) and Platt (Amy Morton) worked together to clear Roman’s (Brian Geraghty) name. Did you watch the last episode? If you missed it, we have a full and detailed recap right here for you.

On tonight’s episode as per the NBC synopsis, “a burglary-sexual assault at a luxury condo is investigated; and Lindsay, Halstead, Atwater and Ruzek go undercover in an attempt to catch the perpetrators. In other events, Voight tries to help a former acquaintance; and Platt and Mouch receive disappointing news about their upcoming wedding.”

A family had apparently slept through a horrific burglary on tonight’s episode of “Chicago PD”. Subsequently, the offenders had used nitrous gas on their victims. The gas commonly known as laughing gas is most often used in dental offices around the world as a way to put patients under during particularly grueling surgery.

But in this case of the family, it had been used to keep sleeping people sleeping and then some. The Clifford’s fourteen-year-old daughter had in fact woken up with a strange pain and she had been bleeding. So Lindsey had put two and two together and she had later asked the hospital to run a rape kit. And sadly it had come back positive.

It seems that once the thieves had peddled gas through the air vents, they then went to town on the house. They took everything that wasn’t stapled down and they had also left behind several urine samples that had been found around the house. Yet security footage from inside of the house had showed everything else they had done.

Including putting on masks while they ripped off Maureen Clifford’s wedding ring just so they could toss around for amusement. So this case became very important to Lindsey and to her quad. A child had gotten hurt and a little digging on the end eventually showed a pattern that had been seen all across the country.

The thieves had hit other cities and there had even been more rapes but no one had made the connection before Chicago. And therefore the Chicago police wanted their city to be the last stop. Though Lindsey went a step further than the rest.

She contacted her old buddy from her junkie days and she got a name. A dealer had recently taken to selling nitrous on the open market and so Voight only had to choke him for a bit before he started to name names. He said one guy had been buying from him in large quantities and that the guy had been called Spence.

So Voight had the dealer throw another party in which this Spence would be invited to. And although Halstead and Lindsey had nearly blown their own cover, they were able to catch Spence. But a second burglary had been reported while Spence had been in their custody. Meaning he couldn’t possibly have been part of the crew they were hunting.

And that been double confirmed after their second victim admitted she had woken up during the burglary.

Tawny Darrens had rented a house on Airbnb and she had told the police that she had been visiting in order to check out grad schools. Yet Tawny had been certain. She said the light from her alarm clock had said 11:30 and she had also said the picture of Spence hadn’t matched of the men that had been standing around her bed when she woke up.

And the hospital had run some test on Tawny that showed she was both assaulted as well as drugged. But Tawny had checked herself out of the hospital before the cops were done with their questions so Lindsey had to later track her down. Although by time she did, her team had already realized that Tawny had made everything up.

With what they thought was two crimes scenes to compare, Ruzek had found the same car parked in front of both houses. And the car was traced back to Ty Henley. Ty had been questioned about several rapes in the past and he had gone to UW Madison at the same time as Spence. Only Spence had lived off campus with his girlfriend Tawny.

So Lindsey’s friends had all three somehow connected to each other and that’s when they knew they had to reach her in time. Because the last they heard of their fellow officer, she had been going out to ask Tawny more questions. And the detectives didn’t know if that would be the thing to push Tawny over the edge.

It hadn’t been but Tawny coconspirators hadn’t wanted to the risk. They had knocked out Lindsey and they could have made their escape but Ty had wanted to assault her before they left. So all the time it took for him to do his drugs first had given the detectives the lead they needed. They had arrived in time to protect Lindsey and even a bullet through Ty – and after he fell – the rest weren’t that far behind.

Spence and Tawny were taken into custody but they hadn’t shown a shred of remorse. Especially not over fourteen-year-old Carolyn. But Carolyn did get justice in the end.

And so all that was left to worry about was the fact Sgt. Platt’s father was broke and now she has to pay for her own wedding.

Plus, there was also a now freed convict that Voight was best friends with but that’s next for week.