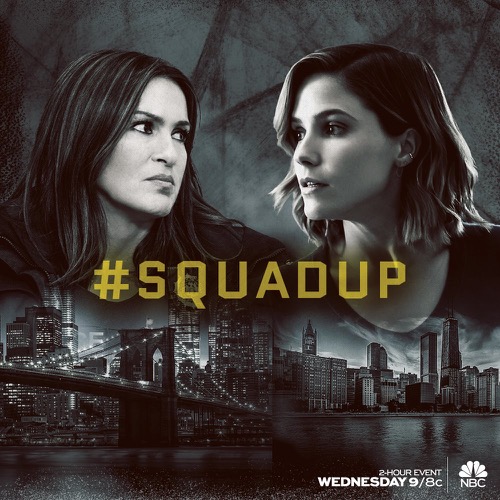 Tonight on NBC their riveting police drama Chicago PD continues with an all new Wednesday February 10, season 3 episode 14 called, “The Song of Gregory Williams Yates” and we have your weekly recap below. On tonight’s episode, the team hunts an infamous criminal who escaped from a New York prison and committed a triple homicide in Chicago. Joining them in the investigation: NYPD SVU detectives Benson (Mariska Hargitay) and Fin (Ice-T).

On the last episode, Lindsay went undercover in order to catch a cop who’s targeting women leaving a local casino; Burgess planned to transfer districts; Mouse offers to set Ruzek up with a friend; and Antonio volunteered to take Roman’s place in a boxing match against Jimmy from Firehouse 51. Did you watch the last episode? If you missed it, we have a full and detailed recap right here for you.

On tonight’s episode as per the NBC synopsis, “after infamous criminal Gregory Yates (guest star Dallas Roberts) escapes from a New York prison, Lindsay (Sophia Bush) and the team learn that he intends to flee New York and is headed for Chicago.

The SVU team informs Intelligence that Yates has been gathering information on Lindsay and after Platt (Amy Morton) calls in a triple homicide likely at the hand of Yates, Benson (guest star Mariska Hargitay) and Fin (guest star Ice-T) catch the next plane to Chicago. Upon investigation of the crime scene, the team learns that another tenant in the building is missing and they work to find a connection between Yates and the woman.”

Tonight’s episode of Chicago PD kicks off at the precinct, Hank is briefing his team on Yates – a serial killer that has escaped from prison in New York, they have tracked him all the way the Illinois border. Yates and Erin have history, he killed Erin’s friend Nadia before he went to prison, and Hank thinks that Yates is headed back to Chicago for Erin. Yates has been stealing cars and killing the owners to make his way from NY to Chicago, Hank tells Antonio to start tracking the victims’ credit card to see if Yates has been trying to use them.

Hank’s team rushes to a crime scene – a meter reader found a house full of nursing students dead. Three women were brutally murdered. Erin is certain that it was Yates, Hank isn’t so sure – because the murders don’t match Yates’ MO. Not only were the women not sexually assaulted, but one of their hands was cut off, and the killer went through their purses and jewelry boxes before he made a run for it. One of the girls that used to live in the house is missing – her name is Nellie Carr – Hank orders his men to find her ASAP and see if she knows anything.

Meanwhile, Yates has made his way to the college – there are nursing students everywhere. A young girl in scrubs with bright red hair walks by and Yates hops out of the car. He asks the girl if her name is Nellie Carr, and she says “yes” – but is obviously confused by how he knows her. A few minutes later Jay and Atwater show up at the college, but Nellie is already gone. Her friends confirm that a man matching Yates’ decription was snooping around campus and looking for her. Yates left another note for Erin, it says “Too bad you are at the station missing all of the fun.”

Trudy holds a press-conference at the police station and gives a description of Yates and confirms that he killed 4 nurses, and has kidnapped Nellie Carr. Meanwhile, Yates is playing the cops, he has a homeless woman dropping a package off at the police station – it’s addressed to Lindsay. The woman confirms that Yates paid her to drop it off. Erin opens the package and there is a human hand inside – holding a note. The note reads, “Erin – why don’t you answer the phone when your mother calls?” Suddenly, Erin’s cell phone starts ringing.

Erin picks up her phone – it’s not her mom, it’s Yates. It’s a video call – Yates is holding a knife up to Nellie’s neck, he taunts Erin and begins rambling about Cain and Abel. He tells Erin that they are all “descendents of murderers.” After hanging up the phone, Mouse realizes that Erin’s phone has been hacked and that is how Yates knows all of their next moves. Meanwhile, Erin recognized one of the walls in the background when Yates was video-chatting with her. He is holding Nellie Carr hostage in Erin’s apartment. Hank and his team rush to the apartment but they are too late – Yates is gone – but they find Nellie Carr hiding in the closet, and alive.

Olivia and her team arrive in Chicago to help Hank with Yates. Olivia and Erin sit down with Nellie Carr to try and figure out what Yates wanted from her, and why he didn’t kill her. Nellie says that Yates just kept asking her questions about her parents and where she grew up – then he left. Olivia realizes that Nellie’s real name is Penelope and then tells Erin they need to talk in private.

Olivia explains to Erin that the name Penelope Williams was searched on the phone that Yates had in prison. They run a background track on Penelope and learn that her parents are named Susan and Michael – and they used to have a son named Gregory. Nellie Carr is Yates’ brother. Thy bring Yates’ mom in for questioning and she reveals that Gregory was “strange.” He used to say horrible things, and kill small animals. So, when Nellie was born they put Greg up for adoption in North Carolina, they were afraid he was going to hurt the baby. Susan is horrified when she realizes that the serial killer on the run is her son Greg.

Olivia, Hank, and their teams get dressed and head to Susan’s house – they think that Yates may be there. Erin is furious because Hank won’t let her go along. He tells Erin that she is off her game right now and Hank is in her head. Olivia tries to comfort Erin, but she is not happy as she watches everyone leave without her.

After the cops leave – Nellie’s phone rings, it’s Yates on the video chat, this time he is holding a knife up to his father Michael’s throat. Erin tries to keep Yates talking while Mouse tries to ping the phone and get his location.

Meanwhile, Hank and the cops arrive at Yates’ parents home – the house is on fire and he isn’t there. Erin gets Yates’ location, he took his father to his childhood home. He tells Erin to come alone so that they can talk or else he will kill his father. Erin heads to the location and calls Hank and tells him that she is en route. He orders her not to go, but Erin goes any ways.

Erin arrives at the abandoned house and enters with her gun drawn – Yates is nowhere in sight. She finds him upstairs with his father. Yates has a rope tied around his father’s neck, and is preparing to push him down to the second floor to hang him. Yates tells Erin to have a seat and he starts rambling about his first victim – a pregnant nurse, just like his mom was when she gave him up for adoption. Then Yates takes out a photo of Nadia and starts talking about killing her.

Yates stands up and pushes his father over the ledge – hanging him. Erin draws her gun and Yates begins taunting her, he says that he wants Erin to kill him and “take him,” he begins stepping closer to her and he gets his wish – Erin shoots and kills Yates. Hank arrives just in time to see Yates drop in a pool of blood.

Afterwards, Olivia takes Erin out for a drink – she tells Erin about her experience with a serial killer named Williams, she let him get in her head just like Yates got in her head. Erin confesses that she is happy that she got to be the one that killed Yates – Olivia tells her she isn’t wrong to feel like that, but that don’t mean she is going to get any closure any time soon. Olivia tells Erin that her phone is always on, and if Erin needs anything she can call her any time.