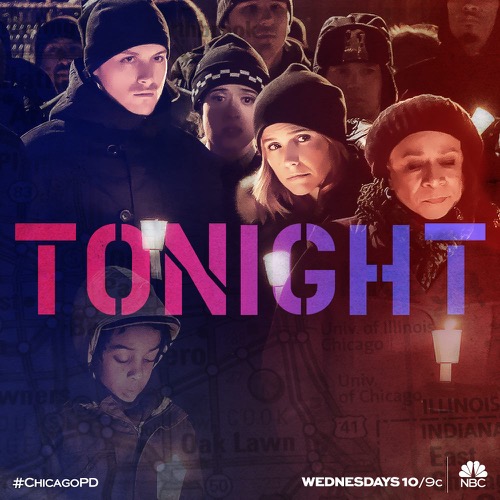 Tonight on NBC their riveting police drama Chicago PD continues with an all new Wednesday February 17, season 3 episode 16 called, “The Cases That Need to Be Solved” and we have your weekly recap below. On tonight’s episode, the execution-style murder of a young boy is investigated.

On the last episode, while working at a sobriety checkpoint, Burgess (Marina Squerciati) found a duffel bag full of heroin in the truck of a respected college professor who claimed to know nothing about how the drugs ended up there.  Did you watch the last episode? If you missed it, we have a full and detailed recap right here for you.

On tonight’s episode as per the NBC synopsis, “the execution-style murder of a young boy is investigated. The incident, which may be tied to another shooting, leads CPD officers and community members to come together for a candlelight vigil.”

Tonight’s episode of Chicago PD kicks off with Antonio arriving at a crime scene – Hank and the team is already there. Burgess runs past him in tears. He finds Hank and Erin standing over the victim, it’s a little boy, 6 years old – and he was shot execution style. A woman named Lauren shows up and is hysterical – it’s the little boy’s mom.

Brian Johnson arrives with his brother Miles and says that he is Noah’s dad. Lauren freaks out and tries to hit Brian and screams that it is all his fault that their son is dead. Brian and Miles storm off – they plan on handling this themselves. Olinsky begs Brian not to do anything stupid. In the middle of the emotional crime scene Hank announces that they are going to solve this case, “it needs to be solved.”

They regroup back at the precinct – Noah’s dad Brian Johnson was a member of a gang called the West Side Posse, they think that the boy’s death could have been related. Hank orders his team to start pressuring all of the known gang members in the vicinity, get one of them to start talking. Hank is called in to the Commander’s office – she introduces him to the local Reverend. The Reverend gives him a speech about “black lives matter” and wants Hank’s word that if he helps find the killer, they will be treated humanely.

Erin sits down with Noah’s mom Lauren, she confirms that Brian Johnson is a member of the West Side Posse. Apparently, Brian’s gang is feuding with another gang called the G Park Lords – and they threatened Brian and his family.

Meanwhile, Burgess and Roman are called to a local bar over a fight. Noah’s dad Brian Johnson is attacking someone for talking about his son’s murder. Roman and Burgess bring him in to the station and Olinsky and Atwater sit down with him in the interrogation room. Olinsky asks Brian about the gang wars. Noah’s dad swears that he left the gang the day that Noah was born, and he cries that he doesn’t know anyone that has beef with him or his son.

A call comes in from Trudy – there was a drive by shooting in the G Park Lords territory. Hank and his team rush to the scene, a member of the Lords named Jesse was injured in the shooting. Antonio hops in the ambulance to question Jesse – he won’t talk, and says he had nothing to do with Noah’s death.

Jay and Erin head to Jesse’s mom’s house – she is getting ready to rush to the hospital to be with Jesse. Jay tells his mom that they think her son was involved in Noah’s death. She screams at them to get out and shouts that her son had nothing to do with it. Atwater and Olinsky stop by Brian’s house – they try to talk to Brian’s cousin Miles but he won’t cooperate either.

The Reverend arrives at the police station – he wants Hank to let Maurice Owens out of jail for a day, Maurice is willing to sit down and arrange a truce between the two gangs. Hank tells Reverend that it is no use, Maurice Owens doesn’t have any pull any more the streets are changing, the younger guys are not going to listen to him.

Meanwhile, Jay is working on the white SUV that witnesses said they seen at Noah’s murder. He finds something strange in the computer system. There is a member of a South Chicago gang called the 2-3’s and his name is Bryan Johnson with a “Y” instead of an “I.” Jay has a working theory that someone went after the wrong Brian Johnson.

A call comes in about a white SUV that has been torched and abandoned. They think it may be the truck that was spotted near Noah’s murder and are able to salvage the navigation system out of the car – and trace where the car has been over the course of the last few days. Not only was it parked near Noah’s murder – but also in front of another member of the G Park Lords – his name is Colin Lowe, and he is also best-friends with Jesse Kemp.

Hank and his team head to Colin Lowe’s house – and as soon as he sees the police he makes a run for it. Atwater and Rouzek track Colin in to a civilian’s house. Rouzek finds him hiding in a closet and arrests him and brings him in to custody. In the interrogation room, Colin refuses to cooperate and says that he doesn’t know either of the Brian Johnson’s. Hank is getting frustrated, the DA won’t press charges until he gets more evidence, and he is at another dead end.

Jesse Kemp’s little cousin Chelsea shows up at the police station and wants to talk to Erin. Chelsea saw Noah’s photos on the news, and she is really upset, she wants to help her cousin Jesse. Chelsea says that Colin and Jordan showed up at her house – they were freaking out because Brian Johnson raped Jordan’s sister. According to Chelsea, Jordan and his 12 year old brother shot Noah. Jesse and Colin sat look out.

Olinsky and Atwater head to Jordan’s address – when they arrive they hear shouting coming from inside. Brian’s brother Miles is there for revenge and he has a gun pointed at Jordan’s head. Olinsky and Atwater are able to talk Miles down and get the gun away from him. Atwater arrests Jordan and takes him in to custody, Olinsky lets Miles go.

Back at the police station, Jordan says that Noah was killed because Brian Johnson raped his sister. He admits that they screwed up and got the wrong Brian Johnson. Jordan laughs that they can’t charge him with murder, he says that it was his 12 year old brother Andre that pulled the trigger. And, he can’t be charged as an adult.