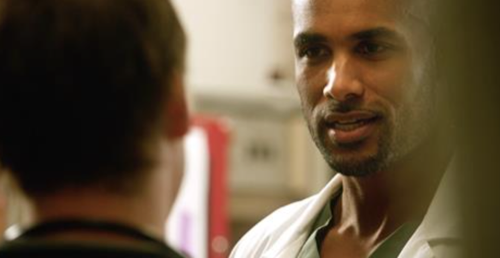 Tonight on CBS Code Black airs with an all new Wednesday February 3, season 1 episode 15 called, “Diagnosis of Exclusion.” and we have your weekly recap below! On tonight’s episode, the doctors are questioned following a violent incident inside the hospital that leaves two physicians gravely injured.

On the last episode, Leanne visited a prison to finally confront the drunk driver who killed her family. Meanwhile, Malaya began to feel uncomfortable around her patient. Did you watch the last episode? If you missed it, we have a full and detailed recap right here for you.

On tonight’s episode as per the CBS synopsis, “the doctors are questioned following a violent incident inside the hospital that leaves two physicians gravely injured. Meanwhile, Neal and Christa take their relationship to the next level, after they disclose their romance to human resources.”

This is definitely one series that you don’t want to miss. Don’t forget to stay tuned to Celeb Dirty Laundry where we will be live blogging the season 1 episode 15 of Code Black. Let us know what you think about Code Black so far in the comments down below!

Apparently Perello hadn’t made it after her ordeal last week. She had already lost liters of blood by time Christa had found her and her condition had been considered too unstable for her to even survive a trip on the elevator. So Mike had been forced to take drastic actions when he had become the doctor on her case.

He decided to open her up right there in center stage of the emergency room and on tonight’s episode he was just one of the many that had to answer for his actions on tonight’s all new episode of “Code Black”.

The hospital had initially told everyone that they were mainly conducting a review of the night in question. And while it was understandable for the hospital board to want to know where the hospital at large could have done differently, it soon became clear particularly to the people they were questioning that they needed someone to blame. Gordon you see hadn’t just attacked Perello. He had gone after Malaya as well and therefore two doctors had been attacked in a crowded hospital.

After he had stabbed Perello, Gordon had followed Malaya into the parking garage and that had put her instantly on her guard. So she had confronted Gordon and told him that she was not in any interested. But he chose to believe that she was lying about being gay and that she had only said she was “lesbian” to shake him off.

So he had stabbed her and was intent on sexually assaulting her when Angus had gotten off the elevator and had seen them. And so Angus quickly rushed to Malaya’s aid where he then threw Gordon off of her but he hadn’t known that Gordon had fallen on his own knife until he had seen Gordon struggling. The knife it seems had gone into Gordon’s neck and while Angus told him not to remove it – Gordon had.

And Angus tried to help. He had applied pressure on the wound but like he told the board he couldn’t do that and provide CPR. So Gordon hadn’t been treated until additionally finally arrived and Angus was able to take him up to the ER. Though the board hadn’t seemed all that concerned about Gordon’s eventual death.

He had wanted to know whether he had treated to the best capability of both Angus and Christa. And both doctors said that he had. Even though there had been a rumor that someone had said “why do we have to save this creep”.

So Angus and Christa had been cleared of that but they like other had been asked why they never noticed that something had been off with Gordon. Gordon had apparently come into the hospital at least seven times. And most of those visits had been as a patient.

Yet no one had. And neither Mario nor Jesse had even made a note of it when Gordon had been admitted after intentionally poisoning himself with rat poison and had asked for Malaya to be the one to treat him. They had just dismissed it.

And to be frank they had forgotten all about it. That is until the board pulled them in for questioning and they had been asked if Gordon had either said or done something that seemed off. So all the witch hunts had done was make Jesse feel bad.

He felt like he could have prevented the attacks and so he had later apologized to Malaya for not protecting her like he should have. However, she had told him that the only one that was to blame was herself. She had gotten a feeling after the first time she had treated Gordon and she had ignored because she had felt bad for him. Like maybe he had been lonely.

But the only person that is to blame for the attacks is Gordon. Not the doctors that had treated him and hadn’t noticed him around the hospital. Not Christa who had heard Perello shouting at someone and had simply thought another resident had found themselves in trouble. And not Mike who had tried to save Perello’s life but who had been taken off her case by egotistical surgeon who felt surgeries was his own thing.

So Rorish had told the board that enough was enough. And traumatizing everyone by making them relive events was not helping.

Yet there was one thing that Angus hadn’t told anyone else besides Mike. And that was he had let Gordon bleed out because Gordon had said he was going to kill Malaya. So Mike told his brother that what happened was going to be a secret they took to their graves.