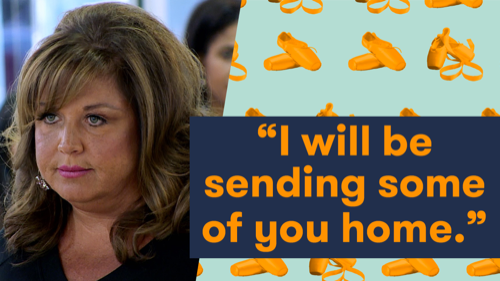 Tonight on Lifetime Dance Mom returns with an all-new Tuesday, December 13, 2016, season 7 episode 3 and we have your Dance Moms recap below. On tonight’s Dance Moms Season 7 Episode 3 Kendall dances a Maddie-esque solo in hopes of beating Nicaya.

Did you miss the last episode of Dance Moms where Abby challenged the junior elites to a head-to-head competition and decided to make big changes within the team? If you did we have a full and detailed Dance Moms recap of the last episode, right here for you!

On tonight’s Dance Moms Season 7 Episode 3 as per the lifetime synopsis, “The ALDC perform an edgy group routine inspired by Kalani’s 16th birthday at this week’s competition against the Candy Apples. Later, Kendall dances a Maddie-esque solo in hopes of beating Nicaya.”

#DanceMoms begins with Cathy talking about facing off against Abby again with her daughter and says she’s going to put her in the group dance this week. Cathy is happy to be back even though she didn’t win last week. She’s just happy that she bothered Abby.

They drive by ALDC LA. Cathy says the windows need cleaned and there’s bird poop on her awnings. Cathy says she’s not impressed. At ALDC LA, Abby calls them in for pyramid and says they finally won group overall and says she’s going to bench the minis again.

Abby says Daviana and Camryn can stay since they helped them win but not indefinitely. She says this week and next week at least. Then Abby says she may only keep one of them. Kira says the two mesh well with the team and want to be there. Ashlee says Abby should be there.

Jill tells Abby not to let Cathy chase her away. Nia is at the bottom with Kalani. Abby says they let Brynn and Kendall beat them in duets. Next is Daviana and Camryn and says they struggled a bit more with the choreography. On top are Brynn and Kendall.

Abby says they came in second and they should have been in first place. Abby says this week they are going to Dublin, CA to New York Dance Experience and will do a group number called Pretty Reckless. Kalani is turning 16 so this is about driving a car recklessly.

Abby says this is big for Daviana and Camryn. She doesn’t want to lose to evil Cathy. Abby says she has just one solo and Kendall gets it. She’s doing The Scream and says she’s had lots of opportunities and needs to be a winner. Jill says Abby needs to be more positive.

Jill doesn’t like Abby’s attitude and they bicker. Jill is still so annoyed about Black Patsy criticizing Kendall’s duet when she says it was horrible partnering. Jill thinks Kendall is vulnerable and Abby is making it worse since Black Patsy will be back making trouble.

The Candy Apples are over at 3rd Street Dance rehearsing and Cathy wants a win. Cathy says they are doing a solo about Harriet Tubman and then they start rehearsing their group. She has Vivi in the number and Cathy says it’s about her growing up.

She says Vivi is her BFF and is excited she wants to be part of it. Cathy has more notes for Vivi who’s struggling with the dance moves. Back at ALDC LA, they start the group routine. Abby says it’s serious subject matter because the car in the dance goes off the cliff.

The moms talk about this being eerie and how much Abby likes dark stuff. They talk about it being like the last text dance with the kids dying at the end. Holly says it’s age appropriate and she likes it. She says a mini couldn’t do this dance. Jill is happy the minis aren’t there.

She says they don’t need the minis since they need mature dances for the teens. She says she hopes Abby sees it. Holly says Abby is stressed about all the things she has to do and is thinking about Candy Apples since that messes with the wiring in Abby’s brain.

Abby is harsh with them and says dig deeper. Now it’s two days until competition and Abby is working with Kendall on her solo. She says Maddie would do well with this since it requires acting and says she has to go 150% if she’s going to win.

Abby says she wants to see if Kendall has it in her to do a Maddie return. She says Kendall cries and walks out usually so she wants to see if she’s going to throw this opportunity away. Ashlee asks if Abby has ever given her a “Maddie” solo and Jill says no one will ever live up to Maddie.

Jill wishes that Abby would move on since Maddie chose to leave. Ashlee says Kendall wouldn’t have gotten that solo if Cathy wasn’t here and Jill agrees and says that twit Cathy did something for them. Jill says Nicaya, Black Patsy’s daughter has a solo so it’s on.

We see Cathy working with Nicaya on her solo about Harriet Tubman. Black Patsy starts crying when she sees this. She says most people see her as an angry stereotypical black woman and says they think she’s crazy but she’s just a mom protecting her daughter. She’s crying.

Kalani gets her dream car

Back at ALDC, the group rehearsal goes on and Kira has arranged an early birthday present. A car pulls up outside and Kalani freaked. Her mom got her a Range Rover. Kendall says now she can drive them all to school and calls shotgun. Kalani drives it slowly in the parking lot.

Abby goes out to take pics of them all in the car. She gives Abby a big hug and then hugs the car. Abby says this is a luxury that can be taken away and says reckless or responsible and they all say responsible. She says on stage she wants to see reckless.

Abby is thrilled that she got her dream car but wants them to get back to rehearsal. She says losing to Cathy is not an option.

Cathy and the Candy Apples load onto their bus to head to Dublin. Cathy says she’s psyched and is certain she’s going to win and Abby will be like the wicked witch melting from Wizard of Oz. The ALDC bus pulls up beside them and the teams heckle each other.

Jill asks the driver to go around them. Black Patsy wants to moon them but Cathy says to keep it classy. They arrive at the show and fans are chanting Abby’s name. Cathy thinks the kids are stupid for chasing the bus to see Abby and the ALDC girls. The Candy Apples are ignored.

Cathy says Abby always runs past because she knows she’ll get shut down. Cathy flips her off while Abby poses for selfies with fans. Cathy works with Nicaya on her solo and Cathy notices her armpits aren’t shaved. She sends her to clean up.

Kendall preps for her solo while Abby does her makeup. Abby says be first today. She says if she doesn’t nail it, no more solos. The moms take their seats and the fans cheer some more for Abby and Cathy is irritated. Kalani tells Kendall she’s got this.

Kendall hopes she does well and can be a leader on the team. She takes the stage to dance. Jill hopes Kendall feels this character to prove it to Abby that she deserves this opportunity. Abby smiles and everyone thinks she nailed it. Jill thanks Abby.

Now it’s Nicaya’s turn. Black Patsy says she gets under Jill’s skin because she says the truth that Kendall is the weakest dancer on the team, no shade intended. Nicaya’s dance is really cool and she does it well. Kendall did a good job too. Black Patsy says it was amazing and she’s crying.

Abby asks why Cathy has a big elephant around her neck when Cathy comes by to taunt Abby. The moms face off and the ALDC moms talk about Kendall’s choreography. Cathy says it’s the same choreography they always see. Abby says Cathy was in Kenya doing tribal stuff.

Abby says pick one mode and stay in it. Black Patsy says Kendall was just flailing around the stage. Black Patsy says Cathy was brave and Cathy starts taunting Abby about going to jail and calls her a felon. Abby and the moms walk off.

Cathy encourages Vivi before the group number and Vivi says she loves her mom as a dance teacher so she hopes the group dance is good this week. Cathy tells the mom that Abby is a witch with droopy boobs that she has. She tells Black Patsy to come see Abby and mess with her.

Abby is getting the group ready for group and says they need to be superior to shut that witch up. Abby says she didn’t come to get beat by some nobody. Abby and Black Patsy come in and Abby says Cathy is out of line. She sends the girls out.

Black Patsy tells Jill to be quiet. Abby says why are you in here and Jill says get out and leave us alone. Black Patsy calls Jill a bitch and tells her to get out of her face. Then Black Patsy gets in Abby’s face and Holly is stunned. Abby says get the hell out. They go.

Abby is all riled up. Cathy is smirking. Candy Apples group goes first. Vivi is struggling with the choreography. Abby is polite and applauds. Holly says it was pretty and a strong performance and she hopes ALDC’s numbers isn’t too complicated.

The group number is really cool. Kalani says she likes when they do numbers they understand that tells a story they get. Now it’s awards time. Solos are first. Jill says there is only a first place at this dance competition and worries Abby will flip if Kendall loses.

Kendall wins first place and Nicaya’s jaw drops. She was sure she was going to win. Jill is triumphant and cheering. Kendall says she hopes her mom shoves this in Black Patsy’s face. Now it’s the group number and Ashlee hopes they win so the minis stay gone.

The group winner is ALDC for Pretty Reckless. Jill is thrilled that the winning streak is alive and well. Cathy is shocked and disappointed. Jill says Cathy forgot to bring her big guns. Outside, Cathy and her moms stew and gale at ALDC.

Nicaya says they only won because they’re famous and says they deserve it and it pisses them off. Abby says go home and milk a cow, we won two weeks in a row. Abby says shame on you for costuming your child that way and says she deserved better.

Jill says Cathy keeps reminding Abby of her legal troubles. Abby asks why did Cathy fly all the way across the country to lose. She says how many dancers of hers are on Broadway. Cathy says she had a kid in Disney and Abby mocks her.

Cathy says she’ll see her at Nationals and that’s the same time that Abby will have her court hearing to find out if she’s going to jail.