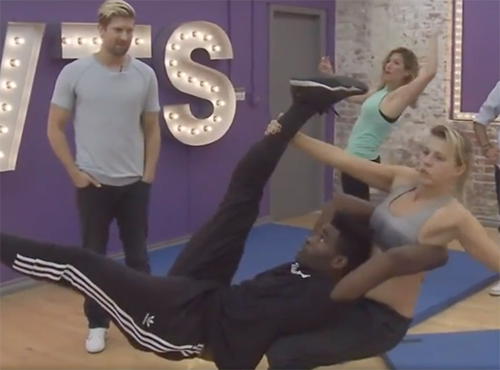 Is Jodie Sweetin leaving Dancing With The Stars? On Thursday, DWTS 2016 spoilers revealed that ‘Fuller House’ star Jodie Sweetin had been seriously injured at rehearsals while practicing with pro partner Keo Motsepe, and she had been taken to the emergency room via ambulance. Various reports confirmed Jodie injured either her foot or ankle, or both.

On Friday, April 22 Good Morning America shared a video of Jodie Sweetin’s injury – and it looks bad. In the video taken at Dancing With The Stars Season 22 rehearsal, Sweetin and Keo Motsepe are practicing their routine for Famous Dance’s Night, and Jodie is apparently trying to life Keo on top of her while she is lying on the floor. The maneuver goes South, and Jodie can be seen screaming in pain and grabbing her foot, and then sobbing loudly.

So far, there is no news yet on Jodie Sweetin’s status, or the extent of her injury, but judging from the GMA video – it was definitely a painful one. Jodie nor Keo have commented on the incident at rehearsals, as of right now it is uncertain if Jodie will be competing on Monday’s episode of Dancing With The Stars. She may make a full recovery over the weekend, or for all we know she could be ordered off from her foot for weeks by doctors.

Despite being in danger of elimination previously, Jodie Sweetin received her best scores yet during “Switch Ups.” And, if it weren’t for her injury, she may have bought herself another few weeks on the show. However, if she doesn’t take the stage on Monday, April 25, she and Keo Motsepe will be eliminated. Check out the video of Jodie Sweetin’s injury, and let us know if you think the ‘Fuller House’ actress will be able to dance this week. Also, don’t forget to check CDL daily for all of your Dancing With The Stars 2016 spoilers and news.