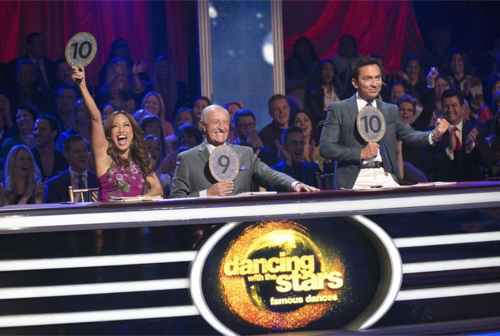 Tonight on ABC Dancing WithThe Stars 2016 airs with an all new Monday May 2, season 22 episode 7 and we have your weekly recap below. On tonight’s episode, the remaining eight celebrities will dance to popular music from favorite musical icons, as “Icons Night” comes to “Dancing with the Stars,” live and it’s a double elimination.

On the last episode, the remaining nine celebrities returned to their original professional dance partners to tackle “Famous Dances Night” on “Dancing with the Star.” Did you watch the last episode? If you missed it, we have a full and detailed recap right here for you.

On tonight’s episode as per the ABC synopsis, “the remaining eight celebrities will dance to popular music from favorite musical icons, as “Icons Night” comes to “Dancing with the Stars,” live. The couples will dance to music from such icons as Beyoncé, James Brown, Whitney Houston and Stevie Wonder. In addition, for the first time ever on the show, it’s men vs. women as the celebrities and their pro dancers get together for team dances, with the men as Team James Brown and the women as Team Beyoncé. Each celebrity will perform a Tango, Viennese Waltz, Quickstep, Samba, Foxtrot, Jive or Salsa.”

Judges Comments: Len: “I love commitment and attack in the Quickstep and that is exactly what you did. You lost body contact but your energy and giving it all you got, that is what you gave me.” Bruno: “It is about freedom of movement and it was really good, much better than usual and you are going in the right direction.” Carrie Ann: “Actually, what I love is your aura tonight, you are lighthearted. I give you a lot of credit, you did great and muscled your way through it. Keo missed a step, but Jodie kept powering through it and that is tough to do. You did lose sync and the body contact was a bit off.”

Judges Comments: Bruno: “You were glowing in every sense of the word, plugged in and electrifying. You had the spark of the Jacksons with a touch of Mary Jane.” Carrie Ann: “I love when people get pissed with the judges. You were in the zone, you did it and I love your hair.” Len: “That was your best dance, as simple as ABC.”

Judges Comments: Carrie Ann: “I am glad you took last week seriously, such grace and elegance. You kept it up, you were grounded, it was wonderful.” Len: “Your bum stuck out a bit in hold, I can’t ignore that and your shoulders weren’t right. Dancing with the Stars is tough, you climb mountains.” Bruno: “Totally believable all the way, I loved your dedication to the dance and your partner, it was fantastic.”

Judges Comments: Len: “Tango is balance between attack and purpose, style and finesse. This had plenty of attitude, there were a few mistakes going on, I only speak the truth. I loved your spirit now, your determination.” Bruno: “You have awakened the drama, you were going for it intensely. You have to get the foot work right, you need to work on your precision.” Carrie Ann: “This week your speed was your enemy in your dance. You need to get the technique down and finish your moves. You need to finish the movements, that is what is lacking.”

Judges Comments: Bruno: “So lovey dovey, it was like watching Doris Day, so full of goodness. All done beautifully, just beautiful.” Carrie Ann: “After last week, you were in the game, that was really good but it wasn’t a yay.” Len: “It was full of whimsy and joy. You lost your neck during parts of it, the overall feeling though was joyfulness, so well done.”

Judges Comments: Carrie Ann: “Ginger that was incredible, it was powerful, it was elegant, it was perfection.” Len: “It was like a cool breeze on a warm summer day, it was well done.” Bruno: “Content, style, interpretation; impeccable. Your best dance yet.”

Judges Comments: Len: “It was like a pizza, a bit crusty on the base but tasty on top. The lifts were spectacular.” Bruno: “The King is bag and Whitney needs a chiropractor. It was different, but very very effective.” Carrie Ann: “It was a bit rough around the edges, but this is a side of you Von that I haven’t seen before.”

Judges Comments: Bruno: “Smoldering, scorching.. from a technical point of view, it was so tightly packed, it was so difficult and you were up with Mark all the time, amazing.” Carrie Ann: “That was ridiculous, when you can channel Tina Turner’s energy like that, everyone loves you.” Len: “A Jive is easy to lose discipline and get a bit off, this was UFC, Under Full Control, well done.”

Judges Comments: Len: “The whole night has been amazing, you not only had to learn your personal dance but also the team dance, I salute you.” Bruno: “You boys are the leader of the pack, you managed to bring your own personalities to life, terrific.” Carrie Ann: “You are all so different and you managed to be all in sync. Nyle was a little ahead of the music and you all joined him, that is team work.”

Judges Comments: Bruno: “OMG I am overwhelmed, you all looked stunning. You lost sync though a couple of times. Overall, hot.” Carrie Ann: “You all brought your nasty game it, you challenged yourselves with difficult choreography. There were a few moments there where there were mistakes.” Len: “I am concerned about the whole competition, I have no clue who is going to take that Mirror Ball because the competition is fantastic.”

Time for some results, the first couple in jeopardy are Kim Fields & Sasha Farber, joining them is Wanya Morris & Lindsay Arnold. Also in jeopardy are Von Miller & Witney Caron. The rest of the couples are safe and dancing next week. One of these couples is safe and the other two are eliminated. Wanya and Lindsey are safe.