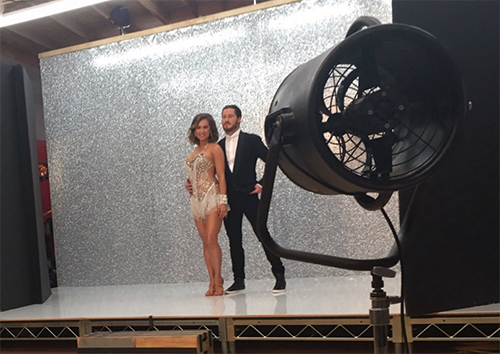 Is Dancing With The Stars Season 22 rigged for Ginger Zee and Val Chmerkovskiy to win? This month, the Dancing With The Stars 2016 cast list was unveiled on Good Morning America – but one of the dancers was already at the studio because she works there! ABC has Good Morning America anchor Ginger Zee pulling double duty, as a GMA host and a celeb dancer on DWTS with her pro partner Val Chmerkovskiy.

For years there have been outcries that Dancing With The Stars is rigged – but not in the way that you would think. Obviously, the producers can’t control how the celebs and their pro partners perform, short of tripping them or tampering with their dancing shoes. But, DWTS winners are determined by America’s votes – and they can control how America perceives them.

Last season, for example, it was obvious that the Dancing With The Stars team was pushing for Bindi Irwin. Not only did they give her pro partner Derek Hough, who easily brings in millions of votes by himself, but they also gave her the most compelling promos and video packages. They shoved Bindi everything down viewers’ throats for the duration of the season and made it impossible for fans to even think of voting for anyone else.

This season, it looks like Ginger Zee is the chosen one. Not only has she already received way more promotion than the other contestants, but she is already on ABC’s payroll and has her co-hosts at Good Morning America promoting her as well. Not to mention the obvious: she was paired up with the second most popular pro dancer after Derek Hough: Val Chmerkovskiy, who just won the Mirror Ball Trophy two seasons ago.

What do you think DWTS fans? Is ABC rigging Season 22 and pushing fans to vote for Ginger Zee? Let us know what you think in the comments below!