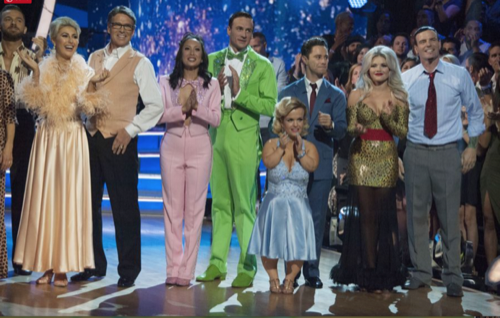 Tonight on ABC Dancing With The Stars 2015 airs with an all-new Tuesday, September 20, 2016, season 22 episode 2A and we have your weekly DWTS recap below. On tonight’s episode, it’s the first results show of the season and the first elimination of the season occurs. Included: never-before-seen footage; and a preview of the “Forever Country” music video.

On the last episode, the 13 couples performed for a second time to try to advance to the next round of competition.  Each couple performed a Cha Cha, Argentine Tango, jive, Paso Doble, Tango, Quickstep or Viennese Waltz, vying for America’s vote. Did you watch the last night’s episode? If you missed it, we have a full and detailed Dancing With The Stars recap right here for you.

On tonight’s episode as per the ABC synopsis, “The first elimination of the season will take place on. There will be special performances with our three returning pros – Maks, Derek and Cheryl. Viewers will also have a chance to see the couples’ dances from the previous night one more time. The show will be packed with never-before-seen footage covering both weeks of competition, including extended training packages, exclusive interviews with the couples, and a glimpse of what’s to come on week three of “Dancing with the Stars.”

Make sure to bookmark this space and come back between 8 PM – 10PM ET for our Dancing With The Stars recap. In the meantime, while you wait for our recap check out all our DWTS recaps, news, spoilers & more, right here!

Tonight’s episode of Dancing With The Stars kicks off tonight with out hosts, Tom Bergeron and Erin Andrews – it’s first results night. Judge Len Goodman raves that he has been “so impressed” with this season’s cast. He jokes, “You know it is getting serious when Maks shaves off his beard.”

Before we get to any results, we get to see a behind the scenes clip of James and Sharna’s performances for Week 1 and Week 2. It looks like Sharna has one of the best partners this season that she has had yet. Up next is a look back at Calvin Johnson and Lindsay’s Week 1 and Week 2 dances.

James is a little frustrated after his and Sharna’s dance last week – Erin Andrews reassures James that he did just fine, and jokes that he has all of the Canadian votes. Everyone is definitely on edge as we wait for the results to start rolling in.

Now it is time to take a look back at Amber and Maks’s dances during Week 1 and Week 2. For both weeks Maks and Amber received ‘s across the board from all four judges. They’re not doing too poorly, but there is definitely room for improvement. Terra and Sasha on the other hand, have been improving by leaps and bounds and are currently in third place. Erin Andrews share some backstage footage of Terra and Sasha, it’s hilarious, during rehearsal terra and Sasha have been playing practical jokes on each other – they are certainly a perfect pair.

Rick Perry and Emma have not been doing too stellar so far this season, but Rick is certainly having a blast dancing and doesn’t seem to mind his low scores. For Week 1 Rick scored 20 points. Week 2 wasn’t much better, and Rick and Emma received 22/40. Brady Bunch star Maureen and her partner Artem also got off to a rocky start this season – after Week 1 and Week 2, Maureen and Artem are currently in 9th place.

While Vanilla Ice tries to teach the DWTS cast how to do his signature “V” hand sign, which Rick Perry has officially mastered, we get to see a flashback of Babyface and Allison’s Week 1 and Week 2 scores. They are currently in 3rd place and at the front of the pack with 5 points. Country singer Jana Kramer and her pro partner Gleb are giving Babyface and Allison a run for their money – they are also tied for 3rd place with 56 points. Everyone has been buzzing about Jana’s hunky partner Gleb, so after we review their dances, Erin Andrews shows some pretty steamy footage of Gleb posing in an underwear ad – of course, the crowd goes crazy.

Vanilla Ice might not be one of the best dancers this season, but he is certainly one of the most popular performers this season. Vanilla Ice and Witney Carson are currently in 8th place with 51 points. The former rapper has been pretty hard on himself every time he makes a mistake, but Witney has been keeping his motivated.

Ryan Lochte, Olympic gold-medal swimmer, has had a pretty eventful Week 1 and Week 2 on dancing With The Stars. We get to see another crazy clip from when protestors stormed the stage. Ryan’s fellow gymnast Laurie Hernandez on the other hand, is doing awesome, she and her partner Val Chmerkovskiy are currently in first place with 5 points.

Before we get to the results and learn who is safe this week – it’s time for an awesome featuring the Dancing With The Stars pros.

Tom Bergeron and Erin Andrews take the stage to get to the live results. The first couples that are safe this week are Laurie and Val and Rick and Emma. Before we hear any more results, we get to see a beautiful montage of this season’s Dancing With The Stars guys – they all share their own personal reasons and motivations for joining the show this year.

Now, it’s time for some more results. According to America’s votes and the DWTS judges’ scores, Marilu Henner and Derek Hough are safe, so are Babyface and Allison. However, sad news for Maureen and Artem and Ryan Lochte and Cheryl are the first couples in jeopardy of being eliminated tonight.

Before we get to hear any more results, it’s time to take a break for a live performance of “We Don’t Talk Anymore,” by Charlie Puth. Of course, he gets some help from the pro dancers, Cheryl and Val.

After Charlie’s performance, we get to see some more backstage clips from last night’s performances – and then it is time for some more live results. As of right now – Maureen and Ryan are currently in danger of being eliminated. Tom announces that Calvin and Lindsay and Vanilla Ice and Witney are safe, and so are James and Sharna. Jake T. Austin and Jenna are joining Maureen and Ryan in jeopardy and could be eliminated tonight.

This season of Dancing With The stars marked the return of THREE popular pro dancers – Derek Hough, Maks Chmerkovskiy, and Cheryl Burke. All three of them have a couple Mirror Ball Trophy’s under their belts, and the competition is stiffer than ever. Cheryl, Derek, and Maks hit the DWTS stage for a live performance, and they blow the audience away!

Gavin DeGraw takes the DWTS stage to perform his hit song, “She Sets The City On Fire,” before we learn which couple will be eliminated tonight.

After Gavin’s performance, it’s time to learn which DWTS couple’s run has come to an end.

Tara and Sasha are safe this week, and so are Jana and Gleb. Amber Rose and Maks are in jeopardy with Maureen and Artem, Jake T. Austin and Jenna, and Ryan Lochte and Cheryl.

Tom Bergeron reveals that Amber and Maks, Maureen and Artem, and Ryan and Cheryl.

The first couple officially eliminated this season of Dancing With The Stars is Jake T. Austin and his pro partner Jenna.