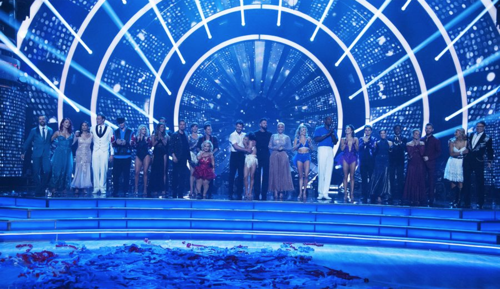 As you can guess, some of the themes would be obvious choices for the celebrities. Maureen McCormick, who will always be known as Marcia Brady from The Brady Bunch; which aired from 1969 to 1974 will dance the quickstep to the show’s main theme.

Jake T. Austin, who is known to newer fans for his role of Jesus Foster on ABC Family’s series The Fosters; also played the role of Max Russo on Disney’s Wizards of Waverly Place. What most people did not know, is that he was the voice of Diego on Go, Diego, Go! on Nickelodeon. He chose to dance the cha cha to the Go, Diego, Go theme.

Amber Rose will be showing us her “dark” side; which will be nice to see because at the premiere she said she was more of a leather and boots kind of chick, and hated sequins. Let’s see what her outfit will look like when she comes out dancing the Viennese Waltz to the Game of Thrones theme. What an interesting combination!

Marilu Henner, who similar to Maureen McCormick, is widely remembered by fans as Elaine O’Connor Nardo on Taxi. Taxi was a sitcom that aired from 1978 to 1983, which also starred Tony Danza and Danny DeVito, to name a few. Marilu opted to perform the foxtrot to Taxi’s main theme.

Kenny “Babyface” Edmonds decided to step out of the recording studio, right into outer space. We are not sure what to think of this combination, but it will be well worth watching. Babyface has chosen to do the Argentine Tango to the theme of The X-Files!

Rick Perry, the former Governor of Texas seems to be sticking to his roots again this week. Although it’s not exactly square dancing, he is still staying with the older TV Show themes. He has chosen to do the quickstep to the theme of sitcom Green Acres which aired from 1965 to 1971.

Laurie Hernandez, the 16-year-old, gold and silver Olympic gymnastics medalist has chosen a rather interesting theme to dance the jive to. It’s the theme of the cute, animated, Disney series from the late 80s called DuckTales.

James Hinchcliffe is an IndyCar driver who has yet to prove that he can be as quick on his feet, as he is in his car. His choice of theme will intrigue a lot of people, as the show is still very popular. Let’s hope he can bring the undead back to life when he dances the Paso Doble to A Tribute to Walking Dead.

Calvin Johnson is a former wide receiver for the NFL’s Detroit Lions. He is on the dancefloor with something to prove. He has surpassed San Francisco 49er’s Jerry Rice record on the field, and now he intends to beat him at Dancing with the Stars too. For those who don’t remember, Jerry Rice came in second in the 2nd Season of the show. Calvin has chosen to dance the foxtrot to the theme of Family Matters.

Robert Van Winkle aka. Vanilla Ice showed us last week that he still had the moves when he and his dance partner danced to his 1990 hit Ice, Ice Baby. This week he has chosen a song to a show a lot of us have watched and laughed over. He has chosen to do the foxtrot to “Love and Marriage” from Married… with Children”.

Terra Jole has made a huge impression on the judges this past week and intends to continue to show that being a little person doesn’t necessarily mean you are disabled or handicap. She has the perfect partner, who adores her; you could see the instant connection. Terra has chosen to do the quickstep to Bewitched.

Jana Rae Kramer is probably best known for her role as Alex Dupre on One Tree Hill, as well as being a country singer. As some of the other celebrities have chosen, she is doing the same. She will be doing the tango to the song “I Don’t Want to Be” from One Tree Hill.

Ryan Lochte, the Olympic gold medalist has had a rough beginning to the competition, but we look forward to seeing if he’s got the moves to remain on the dance floor. Ryan has chosen to do the quickstep to the theme of The Muppet Show.

Be sure to tune into ABC’s Dancing with the Stars on Monday, September 19th at 8 p.m. ET to watch all these celebrities perform, and watch ABC on Tuesday, September 20th to see who is safe and who will be eliminated.  Did you miss any of last week’s dances?  If you did, check out all the videos, right here!