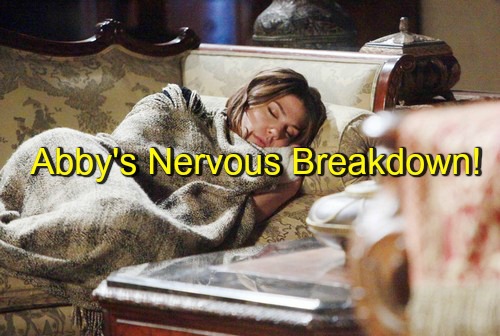 “Days of Our Lives” spoilers for the week of April 11-15 reveal that there’ll be a bit of a twist in Abigail’s (Kate Mansi) storyline. DOOL spoilers for this week’s episodes hint that Abby could be headed off the deep end. It’s clear that Abigail isn’t stable and that’s really going to concern Chad (Billy Flynn) over the next few days.

“Days” viewers know that Abigail recently burned Ben’s (Robert Scott Wilson) legs to a crisp. She would’ve killed Ben if Chad hadn’t intervened. However, the promo suggests that Abigail may have already repressed the memory of the horrible encounter.

Since Abigail seemed like she had truly snapped, perhaps she wasn’t even fully aware of what she was doing at the time.

When Chad mentions Ben and all the drama, Abigail will be perplexed. She’ll be surprised to hear that Ben was even in the house. Chad will decide that his wife desperately needs some help. He’ll let JJ (Casey Moss) know that the situation is dire.

Later, “Days of Our Lives” spoilers tease that Chad will type “nervous breakdown” into a search engine. He’ll want to know what Abigail might be up against. Chad will also talk to Marlena (Deidre Hall) in hopes that she’ll offer her services.

Eventually, vivid nightmares will bring Abigail’s memories rushing back. Abby will realize she was willing to commit murder and she’ll know that it wasn’t OK. “Days of Our Lives” spoilers indicate that Abigail will give a confession to Marlena as she tries to figure out her next move.

Thomas needs to grow up in a home that’s safe and secure. Abigail may not feel like she can provide that without some serious treatment. Abby will start considering options that could help her achieve a better mental state. DOOL buzz hints that Abigail may end up a psychiatric facility so she can focus on getting better for her son.

Since a recast is set to appear around September or October, it sounds like Abigail will come back to town feeling healthy and renewed. You could say she’ll be a whole new woman! (Wink, wink.) Of course, we know more trouble should be brewing by then.That’s just life in Salem. Stick with the NBC soap for updates on Abigail’s future.

So “Days” fans, what do you think about the news that Abigail will struggle to recall what she did to Ben? Once the nightmares spark her memory, will Abby vow to regain control?