Days of Our Lives (DOOL) Spoilers: Ciara Wants to Drop Out of School, Be Thomas’ Nanny – Moves in With Chad, Develops Crush 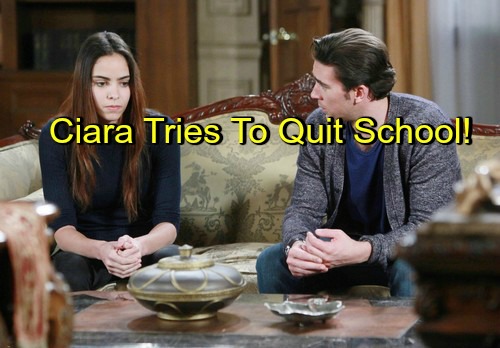 “Days of Our Lives” spoilers reveal that Ciara (Vivian Jovanni) will become fed up with her current situation. It seems like Ciara has been stuck in crisis mode lately. Bo’s (Peter Reckell) death was a shock and she didn’t receive much support from her mother. Hope (Kristian Alfonso) was too busy seeking revenge.

Then, Ciara was forced to leave her home after a dangerous fire and Chase (Jonathon McClendon) raped her on Jennifer’s (Melissa Reeves) sofa. Once Ciara gets arrested for vandalism, she’ll feel like it’s the last straw.

DOOL spoilers indicate that Ciara will announce her plans to drop out of school and try something new.

Of course, there’s a little more to the story than just being overwhelmed. Ciara will also find out that Abigail (Kate Mansi) has committed herself to a mental institution. Chad (Billy Flynn) will have to raise Thomas as a single father until Abigail can get better.

Since Ciara has been babysitting for Chad and Abby, she’ll suggest that she could come on board as a full-time nanny.

Naturally, Chad won’t want Ciara to quit school to take care of his child. Thomas will only be young for so long (especially with SORASing). Ciara has her whole life ahead of her and she needs to get an education. “Days of Our Lives” spoilers tease that Chad will propose a deal to get Ciara to stay on track.

Chad might insist that Ciara can only take care of Thomas if it doesn’t interfere with her studies. If Ciara still wants to be a full-time nanny after she graduates, she could step into that role later. Until then, Chad will likely work out a less-demanding gig for Ciara so they can help each other out.

Next week on “Days,” Ciara will declare that she’s moving out of the house. Since Ciara is 18, Hope can’t stop her. You can probably guess where Ciara will end up. DOOL spoilers say Chad will make Ciara an offer, which means she could be living at the DiMera mansion soon.

There’s been some buzz about the idea of Chad and Ciara potentially growing closer. Ciara could even start to develop feelings for Chad, but we’re hoping it will be a one-sided crush. Abigail is having a hard enough time as it is. The last thing she needs is her husband cozying up to a high schooler.

Still, it could create major drama once an Abigail recast appears down the road. It should be interesting to see where all of this is going. Stick with “Days of Our Lives” for updates on what the future holds for Ciara, Abigail and Chad.

So “Days” fans, what do you think about the news that Ciara will want to ditch school and become a nanny? Can Chad keep her on the right track? Will Ciara join Chad at the mansion? Could Ciara begin to have feelings for Chad?