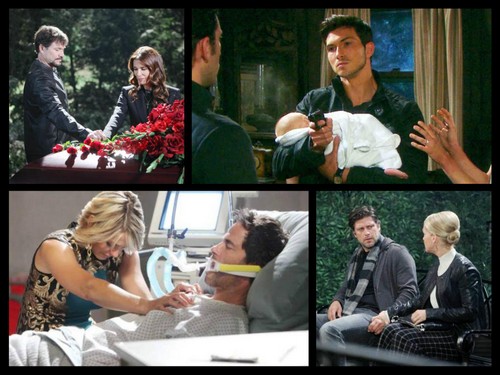 “Days of Our Lives” spoilers (DOOL) reveal that we should see some tough competition at the Daytime Emmys this year. Even so, there will be some notable DOOL stars missing from the ballot. The pre-nominations were just released and many “Days” viewers were shocked by snubs. We thought several performers were shoo-ins, but it looks like there’s no such thing as a safe bet in the soap biz.

The first surprising omission is Robert Scott Wilson as Ben. Wilson was given the chance to dig deep and he certainly took it. DOOL fans were consistently impressed at the way Wilson portrayed a man struggling to keep his sanity. We watched Ben slowly unravel and Wilson wowed us with every episode. Ben’s flaws turned into Wilson’s flawless performance.

Of course, performers were only allowed to submit scenes from two episodes and the running time was not to exceed four minutes. Maybe Wilson’s reel just didn’t show off the talent we all know is there. Nevertheless, it’s an unfortunate oversight and it’s a shame Wilson won’t have the opportunity to walk away with a statuette this year.

Kristian Alfonso, who plays Hope, was also missing from the pre-nom list. We don’t have official confirmation on whether Alfonso submitted or not, but we don’t see why she wouldn’t have. Alfonso had plenty of stellar performances to choose from. Most “Days of Our Lives” viewers are still talking about the amazing work she did when Hope realized Aiden (Daniel Cosgrove) was trying to kill her.

In addition, Alfonso was fantastic in the scenes where Hope reunited with Bo (Peter Reckell) and eventually said a tearful goodbye. Speaking of Bo, Peter Reckell didn’t make the cut either. This was another major snub after Reckell’s intense performances. Reckell perfectly depicted Bo’s fight to get home to his family and his anger over his impending death. He knocked his heartfelt sendoff out of the park, too.

You could also argue that Arianne Zucker (Nicole) and Greg Vaughan (Eric) deserved nods for their furnace scenes back in the summer. They showed a wide range of emotions as they prepared to die. Again, we don’t know if they submitted, but their performances were worthy of an award.

We’ve been hearing a lot of outrage over younger actors and actresses as well. Some DOOL watchers think a few of them didn’t exactly deliver exemplary work. However, we should point out that everyone who submitted in the younger category scored a pre-nom. The rules are different for that particular group. They’ll weed out the fluff once the actual nominations are announced.

It seems everyone will just have to shake off the snubs and find someone else to root for. We’ll let you know which “Days of Our Lives” stars make it through to the final level. Stick with CDL for updates on all the excitement of the 43th Annual Daytime Emmy Awards.

So “Days” fans, what do you think about the news that there were several big snubs in this year’s pre-nominations? Are you bummed that certain DOOL performers weren’t included? Who truly deserves a Daytime Emmy? Voice your opinion in the comments below and don’t forget to check CDL often for the latest “Days of Our Lives” spoilers, updates and news.