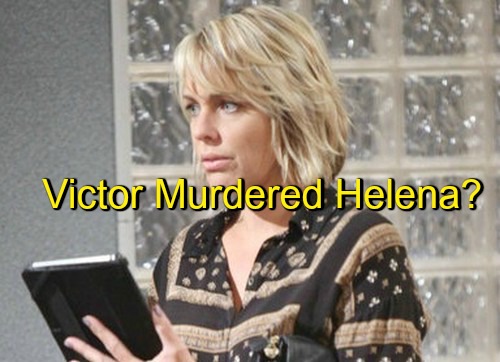 “Days of Our Lives” (DOOL) spoilers reveal that Deimos (Vincent Irizarry) is in for a big surprise on this week’s episodes. It seems someone from Deimos’ past bears a striking resemblance to Nicole (Arianne Zucker). When Deimos stumbles across an old picture, he’ll be shocked by how much Nicole looks like a former flame.

It turns out that Nicole is a dead ringer for Helena, the cheating fiancée that started Deimos’ rivalry with Victor (John Aniston).

Victor claims Helena fell off a cliff and he let Deimos take the blame. Nevertheless, many DOOL fans still suspect that Victor pushed Helena to her death in a fit of rage. Since Victor and Nicole were married once, this is a fascinating twist. Victor was probably drawn to Nicole because she looked like the love he lost.

Naturally, this is a bit of a “Days” rewrite since Victor never mentioned it before. However, it provides a better explanation of why this odd couple came together. “Days of Our Lives” spoilers tease that Deimos will be very interested in growing closer to Nicole.

He’ll wonder if there’s a connection between Nicole and Helena. Deimos will want to hear about Nicole’s history and he’ll be intrigued by what he discovers.

Of course, Deimos won’t be the only one making startling discoveries. DOOL spoilers say Nicole will initially be creeped out by Deimos’ sudden obsession with her. She’ll later learn astonishing info about Deimos that could really shake things up.

Plus, there’s a good chance Nicole could be the one to crack the Summer (Marie Wilson) case. Something’s off about that storyline and Dario (Jordi Vilasuso) appears to be involved. Nicole opened up to Dario about her fears regarding Summer. She’s worried Maggie could get hurt.

If Deimos is behind bringing Summer to Salem, Nicole could catch on. She might find out that Dario was instrumental in all of this. It’s clear that some type of trouble is brewing. Stick with “Days of Our Lives” for updates on Nicole’s role in bringing the truth to light.

So “Days” fans, what do you think about the news that Nicole looks exactly like Helena? Will Deimos fall for Nicole as a result? Will Nicole become curious about Deimos’ sudden interest in her?

Where is this storyline headed? Voice your opinion in the comments below and don’t forget to check CDL often for the latest “Days of Our Lives” spoilers, updates and news.