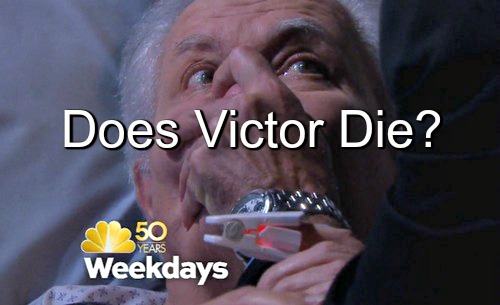 “Days of Our Lives” spoilers for this week‘s episodes of April 25-29 tease that Deimos (Vincent Irizarry) isn’t finished with Victor (John Aniston) just yet. Once Deimos poisoned Maggie (Suzanne Rogers) and forced Victor to sign over everything he owned, he felt pretty satisfied. If Victor could’ve left everything alone, he might have had some peace.

Of course, where would that leave Maggie? She’s facing paralysis and would be doomed to live out her golden years in poverty. Victor just can’t accept that for his love. Maggie deserves revenge and Victor wants Nicole (Arianne Zucker) to help him get it.

Unfortunately, Deimos saw right through Nicole’s charade. DOOL viewers know that Deimos is a lot of things, but stupid isn’t one of them. Nevertheless, Nicole evidently thinks she can salvage this scheme. Deimos is smart, but he’s quite vulnerable as well. Nicole’s resemblance to Helena could still help her reel Deimos in.

“Days of Our Lives” spoilers indicate that Nicole and Victor’s plan will move forward, but something will go terribly wrong. Deimos will end up enraged by his brother. It appears Victor will make snide remarks about the way Deimos tempted Helena. He’ll imply that Deimos caused that confrontation and therefore caused Helena’s death.

It looks like Victor will really strike a nerve. Deimos will rant about how much he loved Helena. He never wanted to hurt her. Thanks to Victor, Deimos lost a woman he cared about and served a 30-year prison sentence for a crime he didn’t commit. All of Deimos’ rage will finally explode.

Deimos tried the methodical approach to vengeance, but Victor apparently didn’t learn his lesson. He still has the gall to insult his evil brother from a hospital bed. Deimos will decide he’s had enough of Victor’s blatant disrespect.

Joey (James Lastovic) managed to kill Ava (Tamara Braun) there, but we’re betting Victor will get out of this jam.

Perhaps someone will walk in and stop Deimos from taking Victor’s life. It’s also possible that Deimos will change his mind or this could simply be a horrific nightmare. Regardless, it’s going to be some good drama! Stick with “Days of Our Lives” for updates on how this will play out.

So “Days” fans, what do you think about the news that Deimos will try to murder Victor? Can Victor survive the danger Deimos has in store? Voice your opinion in the comments below and don’t forget to check CDL often for the latest “Days of Our Lives” spoilers, updates and news.