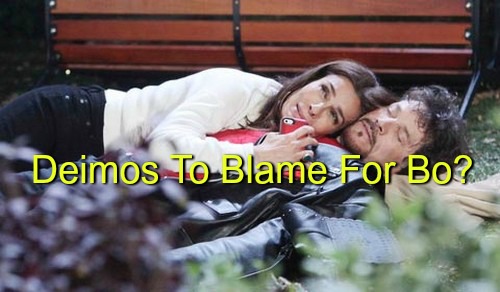 “Days of Our Lives” spoilers tease that some shocking revelations are coming up for Hope (Kristian Alfonso). After Bo’s (Peter Reckell) death, Hope immediately went into revenge mode. She tortured Dr. Malcolm (Adam Leadbeater) for answers and eventually confessed to killing him.

Luckily, we could learn more about that fateful night soon. Dr. Malcolm has another air date coming up, which means we might see a flashback that explains his death. That brings us to the next bombshell. Hope was convinced that Stefano (Joseph Mascolo) was responsible for Bo’s kidnapping, but that may not be the case. It’s beginning to look like someone else was behind (or at least in on) the evil plot.

“Days of Our Lives” viewers will remember that the police traced Dr. Malcolm’s phone calls. Many of them were to Greece. Once Deimos (Vincent Irizarry) appeared, it raised a few red flags. We know that Deimos wants to get his hands on the serum Victor (John Aniston) used to treat Caroline (Peggy McCay). We also know that Deimos desperately wants to make Victor pay for sending him to prison.

If Deimos had Bo kidnapped and tortured, he was killing two birds with one stone. Deimos may have realized that he could possibly secure the formula he was seeking and hurt Victor by keeping his son from him. Unfortunately, the scheme didn’t go as planned. Maybe that’s why Deimos was forced to finally show his face in Salem.

Perhaps Deimos needed another strategy and turned to Philip (John-Paul Lavoiser). Again, Deimos wanted to hurt Victor through his son and get updates on the drug. It’s the same motive, but a different approach.

“Days” spoilers indicate that Hope will get a phone call that really shakes things up. Could Hope find out she was wrong about Stefano’s role in Bo’s kidnapping? It’s a possibility. Of course, Stefano wasn’t entirely innocent.

After all, Aiden (Daniel Cosgrove) was brought in to dupe Hope and make her forget about Bo. Maybe Stefano was either in cahoots with Deimos or he just took advantage of a great opportunity.

Bottom line, there’s likely more to the story. There’s a chance that Deimos or someone who works for him actually killed Dr. Malcolm to ensure his silence. Those earlier phone calls from Greece are just too suspicious to overlook. DOOL obviously has some surprises in store. Stick with “Days of Our Lives” to see if big news is on the way.

So “Days” fans, what do you think about the idea that Deimos may have been the mastermind of Bo’s kidnapping? Was Dr. Malcolm working for Deimos? Was Stefano involved or not? Will Hope learn she murdered the wrong man?