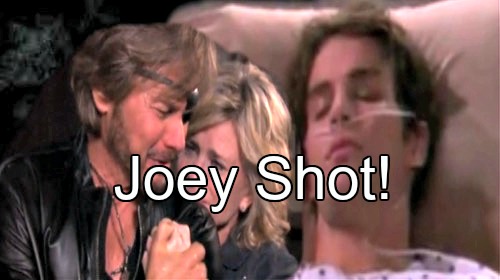 “Days of Our Lives” spoilers tease that a hostage situation will take a dangerous turn at the commune. Simone (Siena Goines), Joey (James Lastovic) and Jade (Paige Searcy) will get caught in the middle of it all. When Joey returns to the compound, Jade will reveal that Dirk (Reiley McClendon) killed a cashier during a recent theft.

Dirk will become increasingly agitated as he realizes what’s in store. A lengthy prison sentence is in his future. However, Dirk won’t go down without a fight. DOOL spoilers say Dirk will take several hostages in hopes of avoiding capture. Joey will step up to protect Jade and the others.

Dirk won’t appreciate Joey’s thoughts on the matter. “Days of Our Lives” viewers know that these two don’t get along. Joey didn’t like Dirk’s interest in Jade and they ended up in a brawl over her at one point. In other words, Dirk already has a grudge. 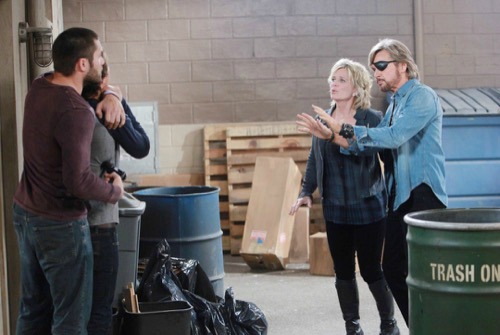 DOOL’s weekly preview video shows Joey and Dirk in a struggle. A shot will ring out and a bullet will strike Joey. Steve (Stephen Nichols) and Kayla (Mary Beth Evans) will be right by Joey’s side after he’s rushed to the hospital. Joey’s life will hang in the balance as his parents huddle nearby.

Steve will embrace Kayla and tearfully insist that they can’t lose their son. They just wouldn’t know what to do without him. Joey will have surgery to repair the damage and his loved ones will be stuck with a waiting game. Jade will join Kayla and Steve as they hope for good news.

“Days” spoilers indicate that Joey will eventually begin the long road to recovery. Jade might change her mind about liking bad boys after this. She’s always been a girl who craves danger, but Joey’s near-death experience could make her rethink that idea.
Perhaps Jade will want to forget about risky adventures.

Maybe next time they should just get Netflix and chill. Whatever the case, it should be interesting to see how this incident affects Joey and Jade’s relationship. Stick with “Days of Our Lives” for updates on the commune chaos and the emotional aftermath.

So “Days” fans, what do you think about crazy Dirk and the hostage situation? Will Steve and Kayla bond through their fear over Joey’s injuries? Will Jade settle down after this wild ordeal?